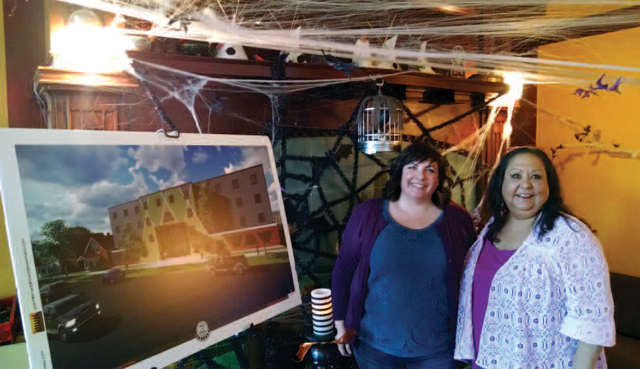 St Paul’s Ain Dah Yung Center has been helping Native children and families since 1983 but is now preparing to provide affordable, transitional housing for young people who normally “fall through the cracks” of social services and foster care programs.

The Minnesota Housing Finance Agency recently announced it is providing $9.4 million in housing tax credits to support a joint Ain Dah Yung and Project for Pride in Living project to build 42 small, apartment-style housing units on University Avenue at Victoria Street, less than a mile west of the Minnesota State Capitol complex.

While these young people fall through the cracks of other social services, she said, they must have safe, culturally sensitive training and counseling services to adjust to life as successful working adults.

Half of the planned development’s units will serve long-term homeless people although they must be in the 18-24 age group for admittance. Seven other units are designated for use by people with disabilities.

Minnesota Housing is providing housing infrastructure bonds and state appropriations totaling $126 million in the coming year. This state involvement with federal programs will leverage a projected $346 million in private and local investments on affordable housing.

Some of the projects statewide are for building and rehabbing single family homes. Other projects are for low income apartments or special housing units such as Ain Dah Yung’s. Combined, state officials said the grants, tax credits and private investments will generate 1,823 “affordable housing opportunities” for individuals and families.

For Ain Dah Yung (“Our Home” in Ojibwe), the targeted group that will be served by the new project represents a disproportionate slice of the homeless population in the Twin Cities, Foster said.

Foster spoke about Ain Dah Yung’s plans during an interview at the emergency shelter the day after staff decorated the main floor of the building for a Halloween party.

“The kids get excited seeing this decorated, and yes, it does make them feel at home,” said Angela Gauthier, a licensed marriage and family therapist (LMFT) who is the residential and clinical director for ADY Center and the shelter.

Currently, as is usually the case year around, there are 10 children from ages 5 to 17 at the shelter, Gauthier said. Being able to care for children as young as 5 gives the shelter the opportunity to keep siblings together even though they may be homeless, in a family crisis or involved with juvenile corrections.

Nearby, the Center also operates the Beverly A. Benjamin Youth Lodge as transitional housing for young people between the ages of 16 and 21. Its goal is to create community and cultural sup-port to help the young people to prepare for independent or inter-dependent living and break away from homelessness and “couch cruising” from one location to another.

Mike Laverdure (Turtle Mountain Ojibwe), architect and owner of the First American Design Study in Lake Elmo, has developed plans that will have a “healing circle” gathering area on all four floors of the building. Cultural training and supportive gatherings can occur there for residents and their ADY counselors and staff.

There will also be dental services, a clothing store, food store and other amenities on site for both convenient living and for workplace training opportunities.

This won’t solve American Indian urban problems with homelessness and family crisis, but it is another step toward filling a void. The majority of Native Americans from Minnesota’s 11 tribes now live in urban areas and especially in the Twin Cities metro area.

As a result, major foundations, corporations and religious groups have joined with the Shakopee Mdewakanton Sioux Community, the Mille Lacs Band of Ojibwe, and an ADY Center’s neighbor, House of Hope Presbyterian Church, in helping fund construction of units in the new housing complex.

Foster said Mille Lacs officials were “shocked” when ADY pointed out that Mille Lacs represented the second and third largest tribal identity for youth needing housing and other family and related services.

Sometimes a safe haven means getting away from abusive situations. In many cases, she added, a safe environment is needed to get away from drug dealers and pimps. Too often with homeless youth, Foster said, undesirable street elements “become substitute families.”

The 2017 ADY Center’s annual reports shows the magnitude of their work which is not exclusive for Native American youth but accounts for more than 90 percent of their residents and clients.

Counselors with the Street Outreach Program helped 2,212 homeless and runaway youths who didn’t want to enter a shelter, including 1,547 new contacts and 665 young people previously known to ADY.

Mental health case managers worked with Ramsey County colleagues to help 57 youth and their families with mental health needs, and ADY’s Family Advocacy Program with family preservation and reunification efforts. There were 41 families with 90 children reached through that program.

Put all together, Foster said Ain Dah Yung seeks to bolster children and young people’s self-identity and cultural pride. Often, she said, “you need to know who you are to get an idea of what you may become.”