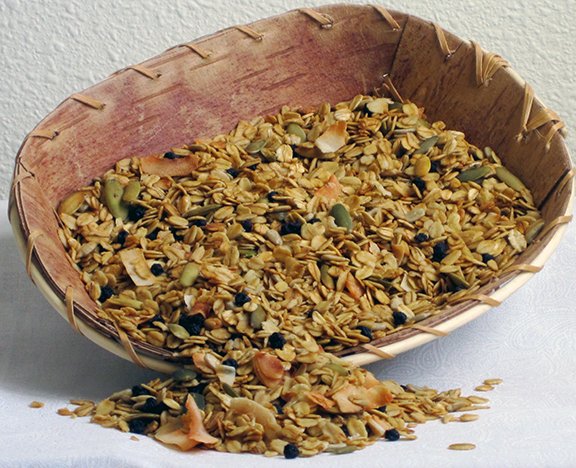 Sap is flowing and being harvested from Minnesota maple trees. It’s calving season out on the bison and beef ranches in the Dakotas and Montana. Like every year over the last millennium, April starts a new food production season for Indian Country in the Upper Midwest and Northern Plains.

But there is something new under the springtime sun this year. The “Buy Local” movement popular across the country for the past decade is being repackaged into a “Buy Native” movement in the Northlands.

The North Dakota Indian Business Alliance is taking the lead in designing the directory website, said executive director Stacey LaCompte. The IBAs in Minnesota, South Dakota, Wisconsin and Montana are also involved with the initial Native Business Directory. It was set to go online in early April.

Over time, LaCompte said, the Alliances hope to make the directory a national listing of American Indian and Alaskan owned and operated businesses.

Foods and arts and crafts will be a big part of the directory, said Pamela Standing, executive director of the Minnesota Indian Business Alliance. These are popular items, and Native harvested and produced food items are part of what appears to be a growing, expanding Native industry sector, she said.

The directory should function as a “Buy Native Gift Guide” in time for the Thanksgiving and Christmas seasons, Standing said.

This effort is consistent with local business groups all across the country that promote “Buy Local” campaigns to strengthen local economies, Standing said. That movement really took off in 2007 when four San Francisco women started a local campaign and coined the term “locavore” to describe people who want to purchase local foods. A Native directory is a variant of the local theme.

Within the food industries, the Buy Native push complements the work of the Intertribal Agriculture Council and its American Indian Foods program at Billings, Mont. Among other services, the latter certifies food products that are “Made by American Indians” under a federally recognized trademark granted in 1995.

Working with the U.S. Department of Agriculture’s Foreign Agriculture Service, the AIF recently hosted food booths at international food expositions in Dubai, United Arab Emirates, and in Tokyo, Japan. Wild rice from the Leech Land Band of Ojibwe was among products from American Indians and Alaska Natives promoted at the U.S. booth in Tokyo in early March.

Harvey Roy, chief operating officer for Red Lake Inc. and its Red Lake Farms, Red Lake Foods and Red Lake Fishery units, said a directory of products and the people making them should help everyone in Indian Country. Natives and their neighbors, he said, do like to buy local and send gifts “from home” to people around the country and abroad.

“The recession (2008-2009) really hurt us and slowed down business,” Roy said. “That turned around the last couple of years and we’re seeing good numbers again. Chokecherry jam and syrups are especially big sellers.”

Red Lakes Foods is among the largest tribally owned food companies. The specialty Native foods industry is more diverse than that. The Native Harvest Online Catalog operated by Winona LaDuke and her White Earth Land Recovery Project is a nonprofit (501c3) organization in which maple syrup and other food products are made from ingredients harvested on the White Earth Reservation.

Across the landscape, individual Native entrepreneurs operate their own ventures. Among them are the Belanger family’s limited liability company (LLC), Northland Visions, which sells a wide assortment of Native harvested products at its Minneapolis store and its mail order business.

And there are much smaller entities, such as the grandmother-granddaughters business that Standing operates from her home at Detroit Lakes. That company is going through a name change right now, from Willow Women, and makes various products using maple sugars for sweeteners, including granola and other food products such as jams and jellies made from Native harvested grains, fruits and berries.

Her grandmother in Oklahoma taught her to make specialty food products when she was 14. She is carrying on the cultural tradition. “My 12-year-old granddaughter DeLaja is my research and development, or R&D department. She’s my chief taster.

“I get adventurous with flavors and natural foods,” Standing said. “If DeLaja gives a ‘thumbs down’ on a recipe, I know I would have trouble selling the product.”

The Native food industry is still more diverse than that.

From the ground up, there are farmers and ranchers. Individual farm and ranch operators are counted differently from their neighbors only if they fill in ethnic boxes on Census forms, or if they own their own land or operate on tribal property.

Roy, at Red Lake Inc., said while several dozen people gather sap in the maple harvest now ending, about 20 to 30 other Red Lake Nation individuals work at picking chokecherries and other berries in season. These are individual entrepreneurs who work for supplemental income or for their love of the outdoors and food, he said.

At the same time, the Red Lake farms have two full-time employees and two seasonal employees, and the tribe’s food processing factory at Redby has eight employees.

With an entirely different geography, the Shakopee Mdewakanton Sioux Community on the edge of the Twin Cities is a natural foods farmer, through its Wozupi Tribal Gardens farm; and a natural foods retailer, at its Mazopiya store at Prior Lake, with additional produce sold through its nearby Shakopee Dakota Convenience Store.

This tribally owned and operated involvement in the food chain also supplies community-supported agriculture (CSA) fresh and natural produce to “Natives and neighbors alike,” as one appreciative customer described it, for people on the southwest side of Minneapolis. The SMDC community refers to this as its “TSA” (tribally supported agriculture) venture.

In addition, Wozupi and Mazopiya supply natural and original foods to chefs and caterers who are now featuring what they call “pre-colonization” and “pre-contact” indigenous local foods. This is still a small, just-getting-started niche in the restaurant and food service industry.

Probably the best-known participant in the Twin Cities area is Sean Sherman, who has a catering business known as the Sioux Chef, who is planning to expand from his catering business to operating a “brick and mortar” restaurant within the coming year. He and a partner are considering a Kickstarter fundraising effort to launch the restaurant.

“We specialize in healthy, indigenous foods, and we’ve been pretty lucky in finding what we need,” he said. The Minneapolis resident, originally from the Pine Ridge Reservation in South Dakota, said the selection of menus is partly aided by regional knowledge of what and when local foods are available.

Sherman helped establish the Tatanka food truck, owned by Little Earth of United Tribes in Minneapolis. This food truck has won rave reviews from food critics in the Twin Cities who acknowledge its use of indigenous foods such as bison, walleye and heirloom grains and berries. One such honor, the Charlie Award, named it the “Most outstanding food truck” for 2015.

Kai Sullivan, manager of Tatanka, said the food truck business was successful last summer and that local craft breweries and tap rooms have kept it successful during the winter months when Minnesotans are less likely to stand outside and order a bison and bison and sunchoke taco.

Tribes, meanwhile, are working to increase the available supply of bison meat for the growing Native American cuisines that are coming back into popularity.

Dianne Amiotte-Seidel, project director and marketing coordinator for the InterTribal Bison Cooperative at Rapid City, S.D., said her group is helping tribes restock the buffalo, or American bison herds, on reservation ranches that were nearly wiped out a century ago. There are 60 tribes in 19 states working to restore herds, she said.

Currently, a Ute tribe is exploring the feasibility of creating a meatpacking operation for handling bison, she added. But the animals are so spread out that operating an intertribal packing plant hasn’t been economically feasible.

Like everything else in the oldest food industry in North America, finding a supply chain for indigenous foods is still a work in progress.