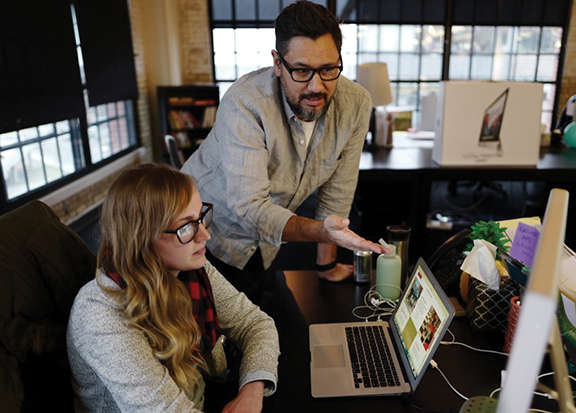 Award-winning Red Circle Agency in Minneapolis sticks close to core strengths by working with tribally owned casinos and hospitality industry ventures, but it attracts national attention for both its creative marketing skills and for its business growth.

Within the past year, Inc. magazine named the advertising and marketing company among the top 25 percent of the nation’s fastest growing privately owned companies on its annual Inc. 5000 list. Locally, Twin Cities Business magazine honored Red Circle among finalists in its Small Business Success Stories for the 2014 year.

Within the creative world, Red Circle received 11 Telly Awards that honor local, regional and cable TV commercials and programs, video and film productions, and online commercials, video and films. In addition, it was honored by the Academy of Interactive and Visual Arts (AIVA) with a W3 Award for creative excellence in websites, web video and online marketing programs.

“I loved it,” he said. “Every day was fun.” And at the same time, the work and fun showed him an opportunity to start a business and that would also serve other Native American groups, he added.

Germann became an entrepreneur 15 years ago in the highly competitive advertising and marketing industry where he competes with Madison Avenue firms, regional and local “Madmen” and women.

By various accounts and directories, there are more than 1,200 such firms with headquarters or operations in Minnesota, of which nearly 1,000 are in the Twin Cities metropolitan area. These numbers do not count in-house departments at large Minnesota-based corporations.

Like many others in this huge supportive business field where advertising and marketing are extensions of Minnesota’s food and agribusiness industries, finance or its medical technology sectors, Red Circle’s growth is closely linked to its ties with its origins: the Native American tribes and bands.

Red Circle has about 80 long time clients that are mostly casino and hospitality industry operators in Indian Country, Germann said. Over the past three years, employment at the agency has increased from 25 people to more than 40 while revenues jumped 406 percent to $7.1 million, according to the Inc. magazine report.

That means Red Circle is still a small business player in the big field of advertising and marketing, although it is the largest Native-owned, full-service advertising agency. But growth is coming fast. Germann said he anticipates Red Circle will crack the Inc. 500 list within the coming year.

“We developed a piece of software that really helps our casinos identify their players,” he said. This bolsters Red Circle’s growth area of digital marketing while making advertising and direct marketing more efficient and cost effective for casino clients.

A Wyoming tribal casino is a case in point, he said. After installing Red Circle software and better targeting casino visitors with promotions and advertising, net profits from casino operations increased 300 percent on a monthly basis.

Most of the new hires over the past year are in the rapidly emerging area of digital advertising and communications, he said. Anyone who has purchased merchandise online and later receives advertising from retailers offering similar or related products understands how sophisticated targeted marketing has become.

“At the end of the day, we know who has been at our casinos and how much they spent,” Germann said. “This identifies who we want as repeat customers.”

It is difficult to predict where the blend of marketing messages with technology will be within the next five years, he added. Regardless, there will always be room in advertising budgets for broader based “media” messages, from traditional advertising and billboards to targeted in-your-home Internet outreach.

The awards Red Circle received in the past year reflect the diversity of its products. Among the 11 Telly Awards the agency received were commercials for Grand Casino Mille Lacs and Grand Casino Hinckley entitled “Tony,” “Lovebirds” and “Cadillac.”

In announcing those awards in June, Grand Casino’s vice president of marketing Heidi Hamers noted that the three commercials used casino guests to “define a warm and friendly brand.”

Nationally, far beyond the Mille Lacs commercial service area, Red Circle’s best-known media product had to have been the “No Honor in Racism” video that went viral on YouTube and other venues on the Internet. (If you missed it you can see the video on Youtube at: https://www.youtube.com/watch?v=YXZeELeE .)

The No Honor media video was filmed in late 2014 as Native Americans were preparing to protest the Washington Redskins mascot in a game against the Minnesota Vikings.

”The Redskins name is so offensive I just had to do it,” Germann said.

“The Telly Awards has a mission to honor the very best in film and video,” said Linda Day, the Telly Awards executive director, in announcing the honorees. “Red Circle’s accomplishment illustrates their creativity, skill, and dedication to their craft and serves as a testament to great film and video production.”

Germann, whose field of study and degree was in literature while being a basketball player at St. Cloud State, has assembled an equally creative team around him. Angel Suarez, a past Madison Avenue advertising expert for ESPN and several Fortune 500 companies, is executive vice president; Deborah McPartland, with past media buying experience for several Native American tribes and Twin Cities large corporations, is media director; and veteran advertising executives Bonn Banwell and Christy Kendall are creative directors.

Meanwhile, vice president of casino services and RECON Systems is Tara Ezzell, another veteran of casino operations and marketing. She was the chief architect of RECON, the casino database software systems exclusive to Red Circle customers.

Red Circle is based in Minneapolis. More info can be found at: www.redcircleagency.com .