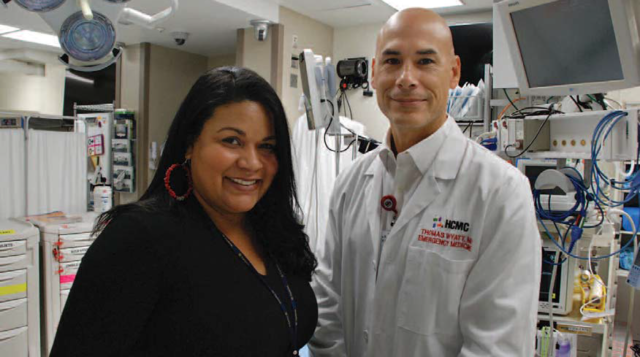 Dr. Thomas E. Wyatt (Loyal Shawnee and Quapaw Tribes of Oklahoma) became director of the Emergency Department at Hennepin County Medical Center (HCMC) in July. This marks the first time a Native American has headed a department at the large Minneapolis medical complex and makes him one of the few, if not the first Native American, to head emergency services for large hospitals anywhere in the country.

No one actually keeps track of such records, Wyatt said in a recent interview. But only three participants identify themselves as American Indians when they attend meetings of the American College of Emergency Physicians.

At the same time, the national Association of American Indian Physicians estimates there are only 500 and 600 Native American medical doctors in the entire country. That isn’t a huge number given the size of the medical profession in America. “We have more (total) physicians than that here in Hennepin County,” Wyatt said.

There is nothing about Wyatt’s rise to leadership at HCMC specific to outreach to the Native community. Rather, credentials and experience account for that. But it is another indication that this major medical and emergency services center for Hennepin County and the city of Minneapolis – and for people from throughout the Upper Midwest – is welcoming to Native Americans.

Wyatt grew up in Oklahoma City, received a bachelor’s in psychology at the University of Oklahoma, and followed an Indians into Medicine (INMED) outreach program to the University of North Dakota where he received his M.D. degree in 2000. He completed his residency at HCMC in 2003.

Aida Strom (Sisseton Wahpeton Oyate) serves as American Indian Patient Advocate for HCMC patients and their families. It is, on paper, a part-time position.

This position was created more than 20 years ago and remains rather unique among major medical centers, she said. The Sanford Medical Center at Bemidji has a similar position, Joe Beaudreau is the American Indian Advocate there, but most large hospitals don’t.

Without such advocates in place, hospital staffs must work through a host of cultural differences, language barriers, legal and governmental agency requirements, and support services for family members accompanying a patient.

That position was vacant for a period of time before Strom was hired eight years ago. Native American leadership groups worked with HCMC officials to get the position refilled.

Some of her advocacy service goes far beyond what most people might think of as hospital care. For instance, when a patient must be rushed from one of Minnesota’s 11 reservations, or from nearby states, a relative usually “drops everything and goes with.”

That means she taps into local support groups and tribal organizations to come up with clothing, hygiene and other articles of personal use for the caregiving relative during the stay. And sometimes it is basic needs such as access to food.

Wyatt said Strom’s work is important for a patient from initial arrival on through the care and healing that must follow. At the Emergency Department, the work between Strom and medical staff is limited when the priority is saving a life. But after that, Wyatt said, Strom is especially important to connect medical staff with a patient’s local doctors or clinics and to work out connections with Indian Health Service or other agencies.

Further work is often needed for a patient to recover, and that, too, involves Strom. Both Wyatt and Strom noted that the opioid crisis in Minnesota – and across the nation –is growing worse and doesn’t spare any ethnic community.

State officials claim prescription opioids killed 186 Minnesotans in 2016, which was more than half of the opioid-related overdose deaths last year. All drug overdose deaths from various substances took 637 Minnesota lives that year. That was from five to six times more than the same causes of death in 2000.

“Lack of resources … lack of funding is a real problem for follow through,” Wyatt said. “It’s real depressing.”

This becomes what might be called extension work for Strom. She connects patients with their local doctors and clinics to try to prevent relapses, further overdoses and perhaps return visits to Wyatt’s Emergency Department.

But this isn’t the only reason why patients arrive with serious injuries or life-threatening health conditions at HCMC.

Wyatt said the medical center’s Emergency Department provides services for about 110,000 patients annually. They are cared for initially by 40 physicians who hold faculty positions with HCMC’s emergency operations, and then by other physicians and medical staff as they move to other rooms and departments for continuing care and recovery.

About 70 patients each month entering HCMC units are known to be Native Americans, Strom said. She works with only about half of them.

In their personal lives, both Wyatt and Strom are surrounded by commitments to health, safety and service.

Strom studied English, not medicine, at Carleton College and worked in business positions before being tapped by HCMC as a patient advocate to use her people skills.

Wyatt said he was always interested in medicine and from early on he knew he was mostly attracted to emergency medicine.

This interest was supported by his parents, he said. “I always had encouragement from outstanding mentors,” he added in what is a reoccurring acknowledgment from successful people in Indian Country. These mentors included high school teachers, a college professor, and medical school faculty “who took a genuine interest in me, not only as a student but as a person.”

This mentor influence was an investment being carried forward. Wyatt has been involved with the Indian Health Service, the Winnebago Indian Health Service unit in Nebraska, the Blackfeet Hospital Emergency Department in Montana, lecture and training programs in Quito, Ecuador and Lima, Peru; and, close to home, the Hearth of the Earth Survival School in Minneapolis.

The latter was as a mentor for students interested in Native Americans in medicine.