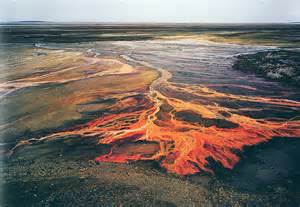 In Anishinaabe Akiing some new mining

proposals, and pipelines threaten the water and land of this region.

This past month, tribal governments stepped up to issue some big

challenges to those plans.

In late February, the White Earth

Tribal Council issued a resolution stating, “…it is opposed to

the application field by the North Dakota Pipeline company with the

Minnesota PUC with respect to a routing permit for the Sandpiper

Petroleum pipeline between Tioga ND and Superior Wisconsin.” The

in Nora Township (one of the most northeastern townships within the

lode of ricing on White Earth. The tribe is also concerned because

this pipeline, like the proposed expansion of the Alberta Clipper

citizens need to feed our families and earn a modest living.

In early February, the Minnesota

“ecological ignorance,” wherein the PCA seems to be trying to

re-designate some of the waters where wild rice is found, so that

those waters can have diminished water quality. In short, Norman

commissioner, “ … waters used for the production of wild rice …

must remain on the wild rice waters lists for regulatory purposes.

list, in effect delisting them as class 4 status of the state with

the stroke of a pen.”

might have been trying to pull a fast one on the tribes, and it

doesn’t look like it worked. In another building in St. Paul, the

Minnesota PUC is considering issuing some permits for two big

pipelines the Sandpiper and the Clipper, and the state and federal

proposal, one which will require water treatment for 250 to l,000

years or so. The copper mining industry is anxiously awaiting the

and even larger and more polluting copper mine projects waiting in

the wings. One might ask the question if these agencies have sole

decisions which reaffirm the Anishinaabe rights in this area.

It’s more than a bit confusing, both

state and federal agencies like boxes. If you ever try filling out a

federal grant application, you know this to be true. It turns out,

that ecosystems and Indigenous peoples do not live in boxes.

EPA or the Environmental Pollution

Agency. In late January, I paid a visit to Region 5 EPA, sort of like

an individual tribal citizen would. I came to ask a few questions of

the EPA, which, in my mind was the one branch of the federal

government which would protect the environment. After all, that’s

its name. The conversation I had was disturbing. First, I asked why

the proposed PolyMet copper Mine had been given an “F” rating,

rare as that may be, in their 2009 Environmental Impact Statement and

if there was any way to not fail with that project.

After all, a study of modern sulfide

mines in the U.S. found that 100 percent of open pit mines in

standards. In the U.S. as a whole, 84 percent violated water quality

standards; of these only 16 percent had predicted a high potential

mine drainage potential, 89 percent in fact resulted in on site acid

mine drainage. The hard rock mining industry is the largest source of

Superfund liability to taxpayers, costing more than $2.6 billion so

far. The EPA estimated the cost of remediating existing pollution at

hard rock mining facilities is between $20 and $54 billion. It would

In PolyMet Northmet proposal, the EPA,

gave the PolyMet project a failing grade. The EPA gave this low a

rating to less than one percent of similar projects. Undaunted,

mining proponents spent over $20 million to reissue a supplemental

draft of their environmental impact study.

So I asked the EPA, “What could

PolyMet ever do to not fail the regulatory process?” I asked this,

because water quality impacts, like the sulfuric acid which would

come from the proposed mine would peak, say 500 years from now. And,

I wasn’t really sure, which junior Canadian mining company was

going to be around to take care of that. I was told by one of the EPA

reviewers that I should be thinking about mitigation, basically, not

preventing. This has bothered me ever since. Then, perhaps more

really the “Environmental Pollution Permitting Agency.” That was

their job nowadays. I basically said, “Say it ain’t true …

after all, this is my agency.” So, what is this to say? In my

opinion, it is to say that the EPA may have lost its way and need a

It turns out, that this is actually a

big thought coming down from somewhere in Washington, and this will

also have possible implications for treaty rights, maybe even for

Bob Perciasepe, Deputy Administrator of the EPA, wrote to all

regional administrators, “ … treaties are the law, equal in

statutes to federal laws under the US constitution, and the US has

the responsibility to honor the rights and resources protected by the

treaties. While treaties do not expand the authorities granted by the

EPA’s underlying statutes, our programs should be implemented to

protect treaty covered resources where we have the discretion to do

so.” It would appear that the EPA has a broader scope than it has

been taking, with the EIS process for the PolyMet mine. And, that

scope should likely be considered as the pipelines, mines, tankers

and increased need for coal impacts the whole region. I am hopeful.

Back on the pipelines. Enbridge wants

for this for their customers – far away, and the second is the

Sandpiper line, which is a new pipeline of fracked oil, coming from

North Dakota (the Ft. Berthold reservation) and will be full of that

highly volatile stuff and run up almost against Rice Lake, the mother

to take money the last time for the Enbridge, but they don’t need

to do it again. Leech Lake in fact had a $ l0 million settlement,

which ended up in a pretty controversial trail – about $ 2.4

Robert Aitken as an uncollateralized loan to Moondance Ranch, for

their summer concerts. It was a fiasco and the Leech Lake Band of

Ojibwe Tribal Council voted to prosecute their own tribal citizens

for the unapproved loan. I hope the tribe got some good box seats in

The Fond du Lac Band made a different

agreement, although it did accept the proposal. Its agreement had to

is rumored that Enbridge, threatened to leave those aging pipelines

and instead create a line just south of the reservation, but

nevertheless impacting the tribe. It was a tough negotiation, but

Fond du Lac ended up with a line. Today, Chairwoman Karen Diver is a

is very prominent in her opposition to the mining proposals. But it

Clipper pipeline, based on agreements with Enbridge. It is unlikely

however that Enbridge wants to negotiate again with the band on

These difficult agreements were made,

perhaps binding the tribe into whatever Enbridge would propose. Times

and information have changed and we know more, particularly about

risk, as the volume of dilbit oil (from the tar sands) doubles in the

lines which cross these reservations. As attorney Paul Blackburn

explained in an interview, “The Alberta Clipper pipeline is the

they corrode, there’s a bigger risk of them rupturing.” Dilbit is

A few other recent findings:

Minnesota or Anishinaabe Akiing is the

U.S. There are seven pipelines running through the 1855 and l854

across Minnesota each day and some of those pipelines are quite old.

coming into the United States, they can bring in a huge amount of oil

that. It is the primary interstate highway in from Canada to the

And the spills problem: There’s

spills that have not been reported. There’s the 865,000-gallon

thumb-size leak in it. It leaked for weeks. That’s a lot of not

monitoring. Pipelines are generally monitored by the companies. They

have this thing called the PIG: The pipeline inspection gauge.

And then they have a super-remote

monitoring system, which doesn’t seem to work. As Blackburn

explained about the largest spill in U.S. history, the Enbridge

they’ve got all this great technology, all this computer equipment

off. Well the truth is there’s been studies done about this. I

technology, by the super-system. So the rest of them are detected by

guess who? The people who live there, local emergency response folks,

by people who smell the spill.” That is, possibly a bit of a local

concern for fire departments. Better have a lot of disposable diapers

and bounty paper towels, that’s the standard for spill clean up as

At stake is really the future of

one-fifth of the world’s water and the people, land and animals

that live there. It is the Anishinaabe universe. It is worth

protecting. This spring, tribal governments appear ready to take on

that challenge. On the tribal citizen front, Honor the Earth

pipelines with attorneys Peter Erlinder of the International

For more information on the battle to