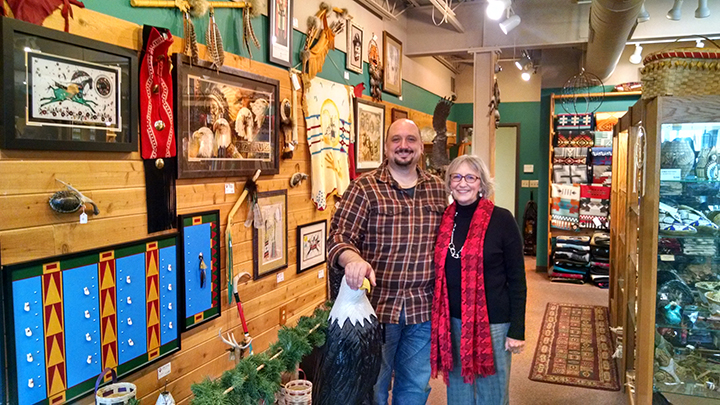 Native American retailers in Minnesota who sell arts, crafts, Native and local foods and other specialty products are not as dependent on the November-December peak gift buying and shopping season that are make-or-break times for most large retail chains and stores.

Other seasons have greater impacts on sales of niche market products, several retailers and suppliers of Native American products said. The end of the year holiday season is still important and can cap off a profitable year. But a burst of sales for the holidays doesn’t sustain small business people in niche markets.

Stores such as Northland Visions in south Minneapolis need strong sales year around to maintain inventories of artworks from Native artists and to keep stocks of art supply materials it sells to hobby customers and artists, said store manager Greg Bellanger (Ojibwe).

“We don’t have a ‘Black Friday’ like the big chain stores,” added his mother Marilynn Bellanger. “We can’t operate all year and then become profitable on the day after Thanksgiving.”

The same is true for Spirit Bay Trading Company in Duluth. There, said company founder Terry Smith, the big shopping season is the summer tourism season when Midwesterners descend onDuluth’s Canal Park to play and stay cool by Lake Superior.

Randy Beaulieau is both a specialty retailer and a wild rice processor and supplier. The biggest season for his Autumn Harvest Ojibwe Wild Rice is the summer Farmers Market season in Minneapolis, he said, when he is an active retailer.

under his and his wife Rachel Limon’s company D.K. Lemon Inc. of White

Bear Lake. It works to encourage and grow Native American arts and

business opportunities. Among the firm’s holdings is Indian Country

That business can be aided by holiday season

sales, Doug said. But other events, including weddings, sympathy cards,

birthdays, anniversaries, get well wishes and other expressions of

thoughts know no season, he said.

Both members of the Limon

household are artists. Another of their companies, Limon Fine Art LLC,

sells their various art offerings. And a third company, The ZAP! Game

LLC, also offers a Limon-developed game that can be made as a gift item

but for any time of year.

In an ironic twist, all of the entrepreneurs cited here had their start with gifts and holiday gift giving. All of their markets and opportunities have strayed from those origins. A common thread, however, is that all are engaged in promoting Native American products and people regardless of the time of year.

That, too, strays from the huge American retail industry that is indifferent to the supply chain and sells products from all regions of the globe.

Nationally, the retail industry is closely watched at year’s end as the major merchants’ sales serve as a barometer of the health of the U.S. economy. Small business operators and ethnic retailers will pocket an unknown but minor share of the $630.5 billion in holiday sales the National Retail Federation is forecasting for this year.

In its annual forecast for the current holiday season, the trade association predicted that November-December seasonal sales would increase by 3.7 percent this year. That follows a 4 percent gain across the board in 2014. Online sales were predicted to increase the most, up 6 to 8 percent over last year, to as much as $105 billion.

There is much less of that type of corporate gift giving now, the store manger said. But corporate executives still order up special gift boxes for partners and major clients, with a — portion being local and Native foods.

From this gift origin Northland Visions grew to include diverse products from artists and producers that are primarily from the dominant Dakotah and Ojibwe tribes and bands in Minnesota and surrounding states. The store, at 1113 East Franklin Ave. in Minneapolis, carries a large supply of beads, threads, needles and other art supplies; and a wide assortment of art works by area artists, including some by Bellanger that reflect his Ojibwe heritage.

The biggest ticket items on display were explosively colorful oil paintings from Joanne Bird, a Santee Sioux contemporary artist from the Sisseton-Wahpeton Oyate in South Dakota.

He also started with a goal of providing seasonal gifts, he said. The big season quickly became the summer tourist season. That season really changed about a year and a half ago when he moved the store a short distance within eyesight of the Aerial Lift Bridge and other popular tourist attractions in Duluth’s Canal Park.

Employment patterns at the store reflect the seasonal dependence on tourists. Smith and his two sons now have eight Native American employees working the summer season. They have six employees currently working the November-December holiday season.

More often than not, Minnesotans who send distant relatives and friends holiday gifts from home usually include wild rice. That was partly a market Randy and Rhonda Beaulieu intended to supply when they started Autumn Harvest Ojibwe Wild Rice LLC, based in the Minneapolis suburb of Coon Rapids.

More than that, however, the company was a way to keep his family tradition alive, Randy said. Beaulieu said he and his family had August vacations during the natural rice harvest on lakes and streams in the Bemidji area when he was a child. Now the rice he prepares and markets is hand harvested by Ojibwe from two of the three Bemidji area Ojibwe nations.

The family’s biggest sales months are in the summer when they sell at the Minneapolis Farmers Market Annex and at other metropolitan Twin Cities markets. “The Farmers Markets shut down at the end of October so our business slows down during the so-called big retail months,” he said.

Autumn Harvest also supplies wild rice to food co-ops and natural foods stores. Seward Community Co-op in south Minneapolis is the biggest outlet for his supplied rice. Being a retailer himself at the Farmers Market, however, allows him to be an educator as well by explaining wild rice and native foods.

Meanwhile, sales and production of greeting cards and artwork are a bit slow this holiday season for artist – entrepreneur Doug Limon. The co-founder and former chairman of the Minnesota American Indian Chamber of Commerce is recovering from a stroke. He and his wife Rachel’s art are available online, and stores such as Northland Visions carry some of their work.

Gift giving is part of his art interests as well. Grandmothers taught him to stitch when he was five. The Ojibwe and Oneida youngster started making potholders while a second grader in school and he walked around Milwaukee selling them.

“A lot of these became gifts,” he said. Laughing as he looked back at his youthful entrepreneurship, most of the money he made went into buying art supplies “to expand my interest in arts.’’

For more information about these Native entrepreneurs and their products, visit them at www.northlandvisions.com; www.spiritbaytradingcompany.com ; www.dklemon.com/home.html , and www.nativewildricecoalition.com/sources-for-hand-harvested-wild-rice.html (under listing for Minnesota).