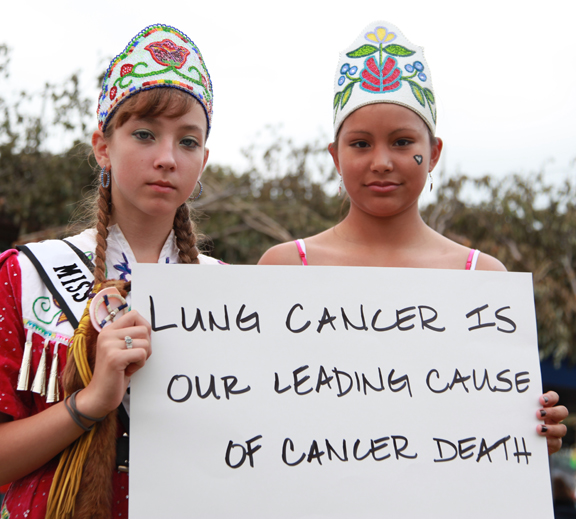 The American Indian Cancer Foundation (AICAF) is sponsoring the first annual Powwow for Hope to provide vital funding for cancer treatment and caregiver support in Native communities. The event is also an opportunity for community members to celebrate the lives of cancer survivors, honor the lives of cancer victims, and share resources and information about the disease.

"Everyone in our Native communities has a story about how cancer has touched them," said Kris Rhodes (Bad River Ojibwe), Executive Director of AICAF. "Cancer doesn’t just impact the individual – it hurts families and the community."

AICAF was founded in January 2011 in Minneapolis to combat the immense burden of cancer in Indian Country. Although Native communities have long been plagued with cancer, comprehensive research on its pervasiveness and impact has been all but nonexistent. The first national study of cancer among Native people was published in the American Cancer Society’s journal Cancer in September 2008.

To date, AICAF has focused its efforts on educating Native community members and health care workers who provide services to Native people. The organization has also focused on research to develop and share new knowledge on what works to fight cancer in Indian Country.

Powwow for Hope is different from these previous efforts because all the proceeds will be used to create an endowment fund to support members of the Native community who are receiving cancer treatment. The funding will help defray the costs of medical treatment and enable family members to stay with their loved ones during the process.

"Cancer survivors are an inspiration in so many ways," said Michael Dahl (Annishinaabe), an AICAF volunteer and the initiator of The Powwow for Hope. "They make life a reality."

Rhodes emphasized that the event will help alleviate the sense of helplessness many cancer patients and their loved ones feel. "The community is excited about the opportunity to give back," said Rhodes.

The inspiration behind the Powwow for Hope fundraiser was Dahl’s mother, Denise "Mashkowizii Gabowiik" Dahl (Annishinaabe). She passed away from cancer in 2008 and Dahl was looking for ways to cope with his loss. His sister signed them up to participate in the Relay for Life sponsored by the American Cancer Society in 2009.

Despite the fact that Dahl knew many people from his community who had been impacted by cancer, he and his sister were two of only about ten Native American people at the event.

"When you’re dealing with tragedy, you’re looking for familiarity," said Dahl. "I decided that I was going to Indianize this. I need this. My people need this."

Later that night, Dahl had a dream that he was sitting at a powwow with his mother. She was holding his hand and kept telling him how beautiful it was. She thanked him for making the powwow happen in her honor.

"It’s not just an idea, but a dream instigated by my mother’s memory and the memories of many, many others in my community," said Dahl.

Dahl met Joy Rivera (Seneca Nation Haudenosaunee People), a Community Health Care Worker and Colon Cancer Screening Navigator with AICAF, at a cancer education event in Minneapolis and began planning the Powwow for Hope with other AICAF staff members and volunteers in October of 2011.

Teams have already begun fundraising in their communities by throwing powwows, raffles, arts and crafts sales, food sales, and walks. According to Dahl, the most successful fundraising effort so far has been The $1 Challenge, in which team members go out in the community, their workplaces, and door-to-door to challenge everyone they see to donate $1 to help fight cancer in Indian Country.

The culmination of these fundraising efforts will be at the Powwow for Hope on April 28th from 10 am-10 pm at the Midtown YWCA in Minneapolis. All the teams will gather at the powwow and host different booths and events, competing for the top fundraiser award and prizes. Additionally, AICAF is sponsoring a silent auction featuring items such as a star blanket, a painting, a day at a spa, a family game night basket, and a set of ricing knockers. AICAF staff will also be manning booths with cancer prevention and treatment resources.

The Powwow for Hope is free and open to the public. All the dances will be intertribal and everyone will be invited to join in. Fundraising teams will continue to form until early April. To receive information about forming a team or volunteering at the event, contact Julia Littlewolf at 612-584-0428, or at: powwow@AICAF.org.

Community members can also get involved by attending the powwow and donating funds or items to the silent auction. To donate online, visit: www.americanindiancancer.org. All funds can be designated in honor of a friend or family member, to a specific type of cancer, or to a certain Native community.

AICAF plans to host the Powwow for Hope every year from now on. Due to the incredible response they have received from tribes nationwide and from the First Nations in Canada, Rhodes also hopes that the foundation can eventually create planning resources so that the Powwow for Hope can be replicated anywhere.

"This event is with, by, and for our people across the board," said Dahl. "I don’t want my people to feel like they have to deal with cancer all alone."