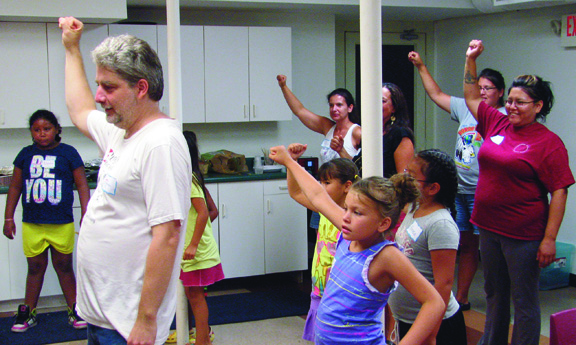 The American Indian Family Center (AIFC) in East St. Paul has partnered with the Minneapolis-based company Z Puppets Rosenschnoz to bring a series of workshops and a puppetry production to Native American families.

Through the course of the workshops, families create puppets, sing, dance, write songs, and learn yoga and mindfulness techniques that culminate in a live community performance of the award-winning Monkey Mind Pirates play.

Monkey Mind Pirates follows the journey of Captain Fitz and the participating families as the "Sailor Chorus" as they search for the "Legendary Waters of Calm." Along the way, they are besieged by "Monkey Mind Pirates," each of which represents a different stress-inducing emotion (distraction, depression, and anxiety). They must discover techniques to tame these monkeys in order to complete the quest.

Chris Griffith and Shari Aronson, the founders of Z Puppets Rosenschnoz, see the workshops and performance as a way to solidify personal connections through art, humor, and playfulness.

"That’s where community is formed, where bonds are created and where we learn best, in humor and laughter," said Griffith.

Janice LaFloe, the Director of Development and Marketing at AIFC, envisions the partnership as an opportunity to connect families to crucial stress management skills.

"This allows us to take the creative part of us as Native people and wrap it around some real skill sets that our families could benefit from," said LaFloe. "I see it as a healthy, creative alternative to addressing historical trauma." 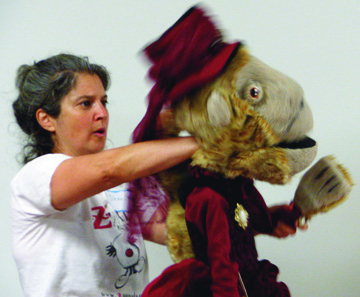 The Z Puppets staff began working with youth in grades K-6 with the Indian Youth Enrichment Program at the American Indian Magnet School in Saint Paul in July. These workshops focused on yoga, meditation techniques, and puppetry. The youth in this program then recruited their family members to join them for workshops at AIFC, which focus on singing, dancing, and songwriting in addition to yoga and meditation.

Families participate free of charge and all events include a catered dinner and yoga mats, a workbook, and a CD of the play’s music for each participant. AIFC will host five of these family workshops leading up to the community performance on August 14.

Griffith, a street performer, and Aronson, a playwright, founded Z Puppets Rosenschnoz in 1998. Since its inception, they have created 15 original productions and run hundreds of workshops, performing for thousands of audience members nationwide. They have been touring Monkey Mind Pirates for two years.

"This is our biggest work that we’ve done so far and this is what we’re most excited about," said Griffith of  Monkey Mind Pirates.

When selecting organizations to work with, Griffith and Aronson stress the importance of providing access to art programs to families from historically marginalized communities.

"We’re aware that lower income families have less access to both the arts and yoga, and at the same time higher levels of stress from  being in poverty," said Aronson. "There’s research that shows that both things like art and yoga work, but these people who may need it the most have the least access to it."

"It was our mission in creating this show to help kids and families deal with stress, but specifically with the Native population, I’m aware of the cultural stress and cultural trauma that exists within families beyond the individual level," he said. "Any tools we can give back to the community are really important."

The culminating performance of Monkey Mind Pirates will be held at Dayton’s Bluff Recreation Center at 800 Conway Street in Saint Paul. Doors open an hour before the performance at 6:30 pm, where attendants are invited to participate in a Free Family Happy Hour with arts and crafts and yoga activities. Suggested donations for attending the performance are $8 for adults and $6 for children, but canned goods will also be accepted for admission. All proceeds will go to fund programming at AIFC, and food items will be donated to the food shelf at the Saint Paul Division of Indian Work.

The workshops and production are financed by a $25,000 grant through Minnesota Arts & Cultural Heritage Funds.

For more information about volunteering to help with the final production at Dayton’s Bluff Recreation Center, or to bring a Z Puppets Rosenschnoz production to your community or organization, contact Griffith and Aronson at: info@zpuppets.org.