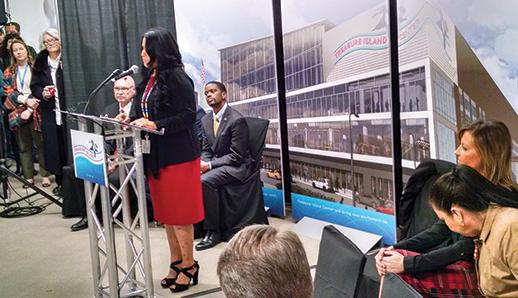 You can’t miss it. Smack dab in the middle of Downtown St. Paul, a square-block anchor building with bold signage now announces to the world it is Treasure Island Center, home to various businesses and practice facilities for the Minnesota Wild hockey team.

Prairie Island Indian Community (PIIC) leaders joined with St. Paul city and civic counterparts on Jan. 16 to officially open and rename the long established business site. PIIC purchased naming rights from city and business developers and now use the center to promote its Treasure Island Resort and Casino at nearby Welch.

“Mdewakanton. ‘People Born of the Waters.’ How appropriate that we are here today cutting the ribbon on Treasure Island Center – very near the waters we know as the Mississippi River,” said Shelley Buck, president of the Prairie Island Indian Community Tribal Council.

Partnering with St. Paul is a logical fit, PIIC and Treasure Island officials explained. The east metro area surrounding St. Paul is a major source of support for Treasure Island gaming and entertainment venues. And, what is now St. Paul was part of the Mdewakanton lands of Prairie Island ancestors before treaties ceded land to the U.S. government in the 1800s.

Buck reminded St. Paul residents and civic leaders of PIIC and its Treasure Island hospitality properties’ historic ties to the city. “Treasure Island is not simply a name of a building,” she said. “There is history here among us – our neighbors.”

There are ties with the Minnesota Wild. Hockey club president Matt Majka noted that fundraising events with Treasure Island and tribal support has provided about $1 million over the past 20 years towards the Wild’s programs for youth hockey in Minnesota.

There are also ties with the city itself. What is now called St. Paul was initially known as Pig’s Eye Landing, an English name given to a trader and bootlegger (Pierre Parrant) by soldiers from Fort Snelling, where the Minnesota River joins the Mississippi, and by Mdewakanton Dakota people in the area.

Pig’s Eye Parrant, as he was known, set up shop in 1838 when he built a cabin and operated his business from a large cave along the Mississippi. This started settlement around what was known as Fountain Cave to English speakers and as In-Yan-Ti-Pi in the Dakota language.

The Army chased him off two years later. Political correctness had nothing to do with it. It was his business, not his physical appearance or nickname that riled the Army. The name St. Paul was selected by Catholic priests who came up river from St. Louis.

Treasure Island Center has also changed names over the years. It started as a large Dayton’s Department Store more than 60 years ago. It later became a Marshall Field’s and eventually a Macy’s until 2013 while operating as large, center-city department stores. 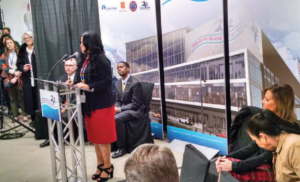 Several businesses had already moved into the building by mid-January although about half the building was still being remodeled for future tenants. Early arrivers included a Walgreen’s pharmacy, TRIA Orthopaedic Center, and Minnesota Housing Authority. The Minnesota Wild was moving in and held its first team practice on the top floor Tria Rink on Jan. 24.

Until PIIC secured naming rights, the building was temporarily known as Wabasha Center by Go Wild LLC, a joint venture for developers Hempel Companies and Capitol City Properties, a unit of the St. Paul Port Authority.

The Wabasha name was in reference to a major business street running past front entrances. That, too, has Mdewakanton ties, as all things named Wabasha in Minnesota are in honor of hereditary Dakota chiefs of that name.

St. Paul Mayor Melvin Carter III, and officials of the Port Authority, Hempel and Wild all spoke of the Treasure Island Center project bringing together what should be enduring partnerships among neighborly groups. In that vein, remodeling and reviving Treasure Island Center was viewed as doing for the core center of the city what CHS Field and the St. Paul Saints baseball team are doing for the city’s Lowertown Neighborhood, and what Excel Energy Center and the Wild have done for the west edge of the downtown area.

Buck noted in her remarks that the Prairie Island community has invested in the city and the region for decades. “We have contributed to governmental initiatives, donated to local nonprofits, have been a long-standing member of the St. Paul Chamber of Commerce, and will continue to contribute both philanthropically and economically to this city and the surrounding region for years to come,”

Buck’s remarks and a blessing and song by PIIC elder and spiritual leader Art Owen placed Treasure Island and Prairie Island’s people squarely in the center of downtown St. Paul’s economic resurgence. Mdewakanton ties to St. Paul’s past and its future objectives were highlighted throughout the official ceremony.

That had special meaning for one participant in the ribbon cutting ceremony – Mayor Carter, who was just in his second week in office.

“Experiencing the challenges caused by displacement and being uprooted from one’s community is central to my family’s history in St. Paul,” Carter said in a statement for The Circle.

“My grandfather, Melvin Carter Sr., owned more than a half-dozen properties in the historic Rondo Neighborhood of St. Paul that was destroyed to build the I-94 freeway,” he said. “The trauma of being forcibly removed and displaced from one’s community is also well understood by Indigenous people of this region.”

More than 600 African American families lost their homes, and several dozen businesses were closed, when the freeway was built through their neighborhood in the 1960s.

Looking forward, the mayor said Prairie Island tribal council’s partnership in the Treasure Island Center development and its investment in Downtown St. Paul are crucial to the continuous development and “vibrancy” of the city.

“It is an important reminder that we are all on Indigenous land,” Carter said. “I look forward to continuing to strengthen our city’s relationship with members of our Indigenous community as we move forward to build a city that both honors and works for all of us.”