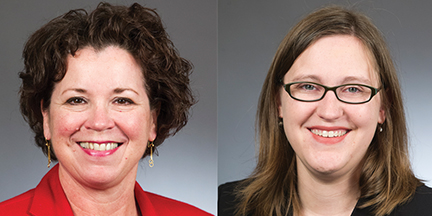 Families that have long been active in community affairs, and inspiration drawn from other take-charge local leaders, have paved the way for two new Native American women to get elected to the Minnesota Legislature.

Rep. Jamie Becker-Finn, an attorney who grew up at Cass Lake on the Leech Lake Band of Ojibwe reservation, won the District 42B seat in the Minnesota House of Representatives. She represents Little Canada, Vadnais Heights, Gem Lake and parts of the cities of Roseville and Shoreview in the northern suburbs of St. Paul.

Rep. Mary Kelly Kunesh-Podein, a library media specialist for Robbinsdale Area Schools, won a House District 41B seat and represents Columbia Heights, Hilltop, New Brighton and St. Anthony in the northern suburbs of Minneapolis and St. Paul. She descends from the Standing Rock Sioux Tribe in North Dakota but grew up in Sartell where her father was a St. Cloud city attorney, an assistant Stearns County attorney, and active legal consultant for Northern Minnesota Ojibwe tribes.

Those nearby and extended examples of family leadership influenced Kunesh-Podein, and she’s followed the same path. She has 21 years as a library specialist for schools in Minneapolis and Robbinsdale, and more recently she also became chair of New Brighton Parks, Recreation and Environmental Commission, and this past summer she started the first New Brighton Farmers Market.

This activism continues into the next generation. One daughter, Elianne Farhat, works on fair wages and workplace issues for the Center for Popular Democracy and a son, Elie Farhat, is an assistant to Hennepin County Commissioner Marion Greene.

For her part, Becker-Finn said, “My parents have always been involved in politics so I grew up looking up to people like (the late) Senator Paul Wellstone.”

“In recent years, I’ve seen politics at the state level become extremely partisan and it’s turned folks away from even wanting to be involved,” she added. I believe what Senator Wellstone believed – that politics, at its best, is about people. And about hope.”
Personal experiences clearly influence the two lawmakers’ agendas. Assistance for families and protection of the environment are examples.

Kunesh-Podein, who has a bachelor’s degree in elementary education from the University of St. Catherine and a master’s in information media from St. Cloud State University, was a single mom during a federal government shutdown that prevented her from getting a teaching license. “My pride took a hit when I went to use food stamps and MN Care, but I remembered my dad telling me that those safety nets are there to help us when we need it and I am so thankful for them,” she said.

That had a lasting impact. “I felt the anguish of discouragement, but I also learned the courage to pursue my dreams,” she said.

As a “life-long learner” from being a parent and an educator, she said she’s dedicated to support policies for quality education from pre-kindergarten to post-secondary. Native students, or instance, have low graduation rates in Minnesota and the disparities for Native and Black communities in the state are growing.

Environmental issues also attract her attention. Along with her work on Parks, Rec and Environment in New Brighton, her husband Tim Podein is an active sports fan and outsdoorsman, she said.

The first bill introduced by Becker-Finn, who was a Roseville Parks and Recreation commissioner, could be described as taking care of business for her district. It was a road and bridge bonding bill for a project. But another issue that holds her attention as both a Native and as a state representative is projection of water.

“My district has 14 lakes and a lot of people want those lakes to remain swimmable and fishable,” she said.

The problems with water in Flint, Mich. Is on the “minds of many,” she said. “I am fortunate to serve on the Environment and Natural Resources Committee and it has been clear from day one that we need strong voices keeping clean water at the forefront.”

Becker-Finn made headlines as a Native parent, it should be noted, before she actively started seeking a legislative seat at the State Capitol. She went after store managers who were selling stereotypical and insensitive clothing and costumes for Halloween in 2015. She was shopping for Halloween costumes; she and husband Gabe have two young children.

A particularly solid article on the controversy was provided by Michael Rietmulder in the Oct. 30, 2015 issue of City Pages. One store did remove a particularly offensive sexy costume, she said, but other plastic insults to Native culture and religion stayed on the shelves.

She was too busy campaigning at Halloween time this year to revisit the suburban stores. But friends told her all the offensive gear was back. “There is definitely a lot of work to be done, as you can see with the Washington Redskins and Cleveland ‘Indians’.”
Native people are everywhere, she said, including in the Minnesota House of Representatives. And, she added, “We don’t always look like the caricatures you see on ESPN.”