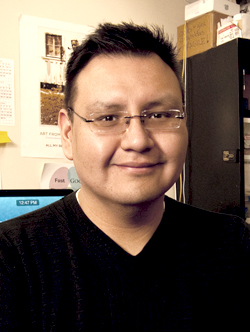 In this issue, we’ve explored the acts

of Ojibwe citizens who are exercising their treaty rights by

harvesting wild rice in off-reservation territory as well as the

impacts of other tribes asserting their authority in economic, land

One of the more outstanding speeches

managing editor of The Sicangu Eyapaha, was given by Rep.

name, Eagle Bear countered with, “Take out your wallet, look at

your ID, is that a South Dakota ID? When you receive a Social

Security check, do you cash it? Yes? Then you are not sovereign.”

It was one of the more bold statements

made about the state of tribal and individual sovereignty in America.

In two questions, Eagle Bear had reminded us all that we are

In that spirit of sovereignty, we take

paper of record for the Twin Cities and regional Native communities

for over 35 years. It is an independent body, free from tribal

government and private influences. In Western parlance, we consider a

newspaper and the journalists it employs members of the Fourth

The Estates of the Realm are a largely

Christian European concept that outline the place of authorities in

society as the clergy (first estate), nobility (second estate) and

commoners (third estate.) The Fourth Estate is a societal or

political force or institution whose influence is not consistently or

While in America – having no

nobility and separation between church and state – we have placed

our faith in the third estate. The place of journalists – while

controversial and subjective at times – is still considered a

responsibility by its more reputable members. In a sense, we are

sovereign but in service to the people. That is a reputation I have

worked hard to preserve in my time as managing editor, sometimes to

the consternation of others.

It’s been my pleasure and privilege to

serve this community in that capacity. However, when one has a

responsibility to such a community, one has to recognize when one’s

efforts are no longer effective, appreciated nor satisfying the

mission of the newspaper. My failure to anticipate a drop in

mother – observing the traditions of my tiospaye associated with

mourning – combined to paralyze my effectiveness at growing this

While I was busy staying away from

society to honor the passing of my mother, opportunities to network,

raise money and sell advertising slipped through my grasp. In Lakota

culture, we take care of the spirit of the recently dead, we put them

first in death just as we had while they lived. Even so, the

traditional period of mourning should have given way to the economic

realities of the world around me, but it did not.

The only real and consistent decision

observed, if for no other reason than that is what my parents did, as

did their parents. So while I honored my family, culture and

tradition, I was unable to honor my obligation to this newspaper and

The price of that choice has resulted

in the diminishing of revenue and the goodwill of community

investment. And so, my mistakes and faults before me, I am stepping

down at the end of the year. It is my hope that my successor is

equipped to anticipate changes, respond immediately and satisfy the

needs of the community and this news organization, however they may

anniversary of my mother’s death. While professional obligations did

time, being welcomed back into society, it does mark the formal end

of mourning. So in my remaining time at this newspaper, my primary

responsibility will be to rebuild trust and goodwill for the next

managing editor who will, undoubtedly, grow this organization to

serve this community with distinction and honor.