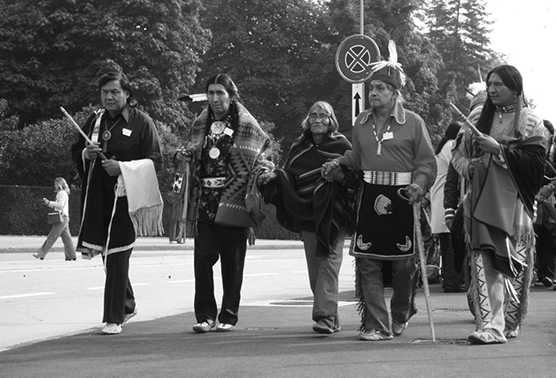 As I drive home from Fargo towards evening, there are end-less fields of farm equipment, sugar beets, potatoes and corn. The land is flat, the horizon endless. And then there is the mist. I drive into the mist.

The mist is the remaining wetlands. Sparse they are. When I get towards Gaawaabaabaanikaag, or my reservation, called White Earth for the clay found here, the mists begin. The muskeg begins, full of medicines, life and the filters of Mother Earth. Wetlands once covered almost 5 million acres of North Dakota, along with buffalo wallows, and soft spots of prairie and biodiversity. By the l980s North Dakota had drained almost half of the wet-lands, deemed useless by the industrialized agriculture. Into the mist, that’s how I know I am home.

As a young woman, I was involved in the first United Nations forum on Indigenous peoples. That was 1977, UN headquarters in Geneva. I was eighteen. I remembered fully that our rights to exist were not recognized. Indeed, I remember seeing pictures of Wayuu Native people from what’s known as Venezuela hanging from trees like deer, hunted to the ground. I remember the villages in Chiapas and the Amazon burned down to take the land of Native peoples for mining and oil enterprises, and I remember that nation state after nation state stood by, or participated in the theft and genocide.

Indigenous peoples were viewed as internal problems of nation states, essentially the property of the state. This is not unlike how the Bureau of Indian Affairs (trust responsibility) for Native people was originally in the Department of War, and is now in the US Department of Interior. Simply stated, I am not your natural resource, I belong to the Creator and to my people.

And I remembered great leaders. As a young woman I was present when the Tadadaho of the Iroquois Confederacy addressed the UN when Phillip Deere, the great spiritual leader of the Muskogee Creek, spoke. I remember David Monongyue and the great Hopi leaders, who had prophecized the coming of the House of Mica (the United Nations is a glass building), and the Iroquois who had come to the UN for thirty years, and said, why are the red people not inside?

It was an epic time and it is now. What remains of the world, the most alive and full of the strong power of our mother, is within our territories: the worlds’ remaining biodiversity, the remaining people who carry on their instructions of prayer and sustainability.

The World Bank estimates, “…Traditional Indigenous Territories encompass up to 22 percent of the world’s land surface and they coincide with areas that hold 80 percent of the planet’s biodiversity. Also, the greatest diversity of indigenous groups coincides with the world’s largest tropical forest wilderness areas in the Americas (including Amazon), Africa, and Asia…11 percent of world forest lands are legally owned by Indigenous Peoples and communities…” Simply stated, if you want to save the planet, we indigenous people must be saved as well.

The United Nations Declaration on the Rights of Indigenous People is not binding, but it represents an evolving standard set-ting tool. To put it simply, that is how inter-national governance and civil society work – we evolve the tools to balance our societies, adapt, and be wiser. Leadership in the implementation of UNDRIP is seen particularly in Latin America, where the Declaration is reflected in revisions to countries’ constitutions, including Ecuador, Bolivia, Costa Rica, El Salvador, Nicaragua, and Mexico. Although less explicit, UNDRIP has also influenced the constitutions of Kenya and Myanmar.

Bolivia’s incorporation stands out in its comprehensiveness by including Indigenous Peoples’ right to self-determination and self-government. Bolivia has also adopted the “Rights of Mother Earth” as an essential part of their constitution following the leadership of Evo Morales.

Perhaps the case of Standing Rock versus Energy Transfer Partners has brought center stage the lack of US remedy to the issues of exploitation. Indeed, the Special Rapporteur for the United Nations Human Rights Commission came to Standing Rock to take testimony as to the human rights violations caused by the US, Morton County, North Dakota and Tiger Swan., the private para military security firm which directed much of the so called unified command at Standing Rock.

The Standing Rock Tribe filed a com-plaint at the Inter-American Commission on Human Rights (IACHR) in December 2016. In that complaint, the Standing Rock Sioux Tribe, Cheyenne River Sioux Tribe, and Yankton Sioux Tribe, with Earthjustice and the American Indian Law Clinic-UC Boulder, submitted a Request for Precautionary Measures Pursuant to Article 25 of the IACHR Rules of Procedure Concerning Serious and Urgent Risks of Irreparable Harm Arising Out of Construction of the Dakota Access Pipeline to the IACHR.

They asked, in addition to an injunction on the pipeline, that the Court “…Establish clear rules requiring that indigenous people who may be affected by government decisions have the opportunity for full and meaningful prior informed consent within the meanings established in the UN Declaration on the Rights of Indigenous Peoples and the jurisprudence of the Inter-American Court and this Commission…”

The Trump Administration overstepped federal regulatory policy issuing the permits for the Dakota Access Pipeline. The federal courts have not remedied this and the state courts in North Dakota are filled with over 800 cases of water protectors, arrested while defending Mother Earth. The civil cases – where we get to ask how it is that Morton County, Tiger Swan and $30 mil-lion of money directed at repressing first amendment and Indigenous Rights – are just beginning. One case, a civil case regarding excessive force, will be heard in the 8th Circuit Court of Appeals on October 18th in St. Paul, Minn.

Clearly the violations of the rights of Indigenous peoples (ie: Indigenous nations to protect water, land, and future genera-tions) remain constant by the Trump Administration. Trump has no under-standing of UNDRIP. However, ignorance does not constitute a legal excuse, and cer-tainly since the US was the last nation to ratify UNDRIP, it would be surprising to find leadership in the US.

On the broader scale, legal implications of UNDRIP are found in a number of international cases. As Miriam Anne Frank writes in Cultural Survival Magazine, “…One of the first achievements was in the historic Cal v. Belize case, where Maya went to court over concessions granted for the exploitation of natural resources on their territories without their consent. In this case, the Chief Justice of the Supreme Court of Belize, Abdulai Conteh, upheld the Maya’s native title, recognizing customary law in their claims to traditional use and occupation, confirming that the title has legal protection under the Belize Constitution. More importantly, he explicitly stated that Belize must follow through on its obligations under the Declaration. He referred specifically to Article 26, Para 1: “‘Indigenous Peoples have the right to the lands, territories, and resources which they have traditionally owned, occupied, or otherwise used or acquired.’”

In Aotearoa (New Zealand) the Declaration was used in Wakat & Rore Staford v. Attorney General regarding the claim by the Maori that the (British) Crown owed fiduciary duties in regards to their failure to reserve the agreed upon 15,100 acres for their benefit. When sending the case back to the High Court for determination, Presiding Chief Justice Elias CJ specifically quoted Article 40, “Indigenous Peoples have the right to access to and prompt decision through just and fair procedures for the resolution of conflicts and disputes with States or other parties, as well as to effective remedies for all infringements of their individual and collective rights. Such a decision shall give due consideration to the customs, traditions, rules and legal systems of the Indigenous Peoples concerned and international human rights,”

In Kichwa Indigenous People of Sarayaku v. Ecuador, the Inter-American Court of Human Rights found that Ecuador had violated both international and domestic law, including the Sarayaku’s right to communal property and cultural identity, and for failure to obtain their Free, Prior and Informed Consent (FPIC). This is in relation to the use of Ecuador’s armed forces to support the State Petroleum Company’s destruction of the environment and sacred sites of the Sarayaku. The Declaration is cited throughout this court case and the focus on FPIC will serve for other cases of development-induced violations….”

It is forty years since I sat with those great leaders at the United Nations. Much hard work has been done by thousands of Indigenous peoples who have traveled far, left their homelands, and “warriored up” to protect our Nations. The leadership of the international Indigenous movement is strong, much of it is young, and it has learned from all the work done before.

Here in Minnesota, the United Nations Declaration on the Rights of Indigenous Peoples will play out in two major battles over our territories – the battles over Line 3 and the battles over the mining of our great territories of the North. Indeed, the idea of “consultation” by the state of Minnesota was marred by the resignation of Danielle Oxendine Molliver, the Tribal Liaison of the Department of Commerce. Molliver resigned because of “the failure of the state of Minnesota to fulfill its obligations of good faith and fair dealing with the tribe…with the Line 3 project.”

Oxendine Molliver told The Intercept that the department had not adequately responded to the concerns of tribal members and had marginalized her after Enbridge claimed she was being overly sympathetic to indigenous pipeline opponents.

The state has offered “consultation” but that is not the same as “Free Prior and Informed Consent” that which is required under the international standard set by UNDRIP. Minnesota should join other jurisdictions in setting an example of a new millennium of legal relations with Indigenous nations.

For myself, I return to the mist. Always to the mist; for there all the medicines the Creator has bestowed upon us continue to live. Inaakiingimin, our land. And while we celebrate and nourish international standards, that which shall be protected through this work, is here in the mist.

Concert brings together multiple music genres in defense of water