You can’t make this stuff up. At the end of the fossil fuel era, the plan is to transfer the liability to Native people. And it’s not going to work. Dressed up as “equity positions”, or “reconciliation”, across the continent, corporations and governments are trying to pawn off bad projects on Native people.

The most recent case was the attempt to stick the Navajo Nation with a 50 year old coal generating plant – Navajo Generating Station. That’s after BHP Billiton, the largest mining corporation in the world dumped a 50 year old coal strip mine, with all sorts of environmental and health liabilities, on the tribe. Always good to get rid of liabilities on some poor people you’ve taken advantage of for fifty years or so. It didn’t work, the Navajo Nation rejected the offer.

Now here’s a new one – a really good one in Canada. It turns out that no one really wants a tar sands pipeline. Well, except some pipeline companies, the Koch brothers, Syncrude and Prime Minister Justin Trudeau.

Here’s the skinny: The Trans Mountain Kinder Morgan project would “twin” another pipeline making this a 700 mile pipeline with a 800,000 barrel a day capacity. That pipeline is currently Canada’s only way to get oil to Chinese markets. That pipeline was originally purchased for $4.5 billion in August of 2018 from Kinder Morgan, who faced stiff opposition in the courts and in the streets. Trudeau purchased that pipeline, for the people of Canada, and the next day the Court of British Columbia ruled that all permits were null and void on the pipeline, as Indigenous people had not been consulted and had to give consent. 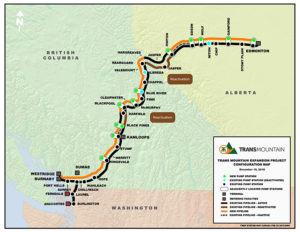 Risky Business
Fast forward to January of 2019, when the value of the pipeline, now dubbed ‘TMX’ (I call it Trudeau West) has dropped about a $700 million in value. A pipeline without approvals is a risky thing, and getting riskier by the day. Interest payments on a pipeline project are also pretty hefty. Robyn Allan, an independent economist critical of an expanded Trans Mountain pipeline, says financial statements show the existing pipeline suffered a $58 million loss in the first four months that the government owned it. Economists disagree on the interest payments on the pipeline debt ­– it’s somewhere between $149 and $249 million annually, and that’s a chunk of change. [www.mining.com/ canadas-trans-mountain-pipeline-on-track-to-lose-c175m-in-2019-economist]

That’s a lot of money. No time better to send that debt over to the First Nations. After all, most of the Canadian First Nations have poverty rates four times the national average, a lack of potable water, and inadequate infrastructure. It makes perfect sense that a First Nation, or coalition of First nations, should assume Canada’s debt and liability on a mega project which will wreak environmental and economic havoc. [www.theglobeandmail.com/ canada/article-ottawa-says-its-on-track-to-end-drinking-water-advisories-on-
reserves]

Enter Reconciliation Pipeline
It’s clever for sure, in the political spin. “Let’s make it the Reconciliation pipeline. Through majority Indigenous ownership, it can improve Indigenous lives throughout the West. How? By returning profits made from shipping resources to market to the traditional owners of the land from which those resources came,” their website explains.

“Project Reconciliation wants Indigenous peoples to use capital markets to take a majority ownership stake in Trans Mountain. It also wants to create a Sovereign Wealth Fund to create intergenerational wealth to improve Indigenous lives across the West by investing in infrastructure and renewable energy projects.”

That’s one bid for the risky pipeline. Two more “competing” First nations coalitions allegedly seek to buy the pipeline. The ‘Iron Coalition’ from Alberta has invited 47 First Nations and about 60 Métis organizations in the province to sign up for the effort, which was endorsed by the Alberta-based Assembly of Treaty Chiefs last fall. And then there’s a third – the ‘Western Indigenous Pipeline Group’, comprised of First Nations already along the infrastructure’s route, impacted by the present 300,000 barrel a day tarsands pipeline, to be “ twinned” should a miracle occur in financing. That’s three coalitions all preparing a bidding war for a pipeline project which faces massive opposition. Rueben George, (Tsleil-wauluth First Nation) leader in the opposition to the pipeline, calls this new development “a new smallpox blanket.” Economically, he’s probably right.

Big Money on the Line
The offers are big, and the numbers a bit perplexing. Project Reconciliation plans a $6.8-billion bid for a 51 per cent stake in the pipeline. The other two Indigenous initiatives are also bidding for an equity stake. Just to make sure that more money is pilfered off First Nations, Project Reconciliation plans to raise $7.6 billion in bonds. That’s more debt and more people making money off the First Nations.

My math is not the best. But let’s just note that the pipeline was purchased for $4.5 billion by Canada less than a year ago. (That gave a 637% return to Kinder Morgan who dumped a liability). Then the resale value of the pipeline dropped in January. And as the Toronto Globe and Mail notes, “Expanding the pipeline, as Kinder Morgan had initially proposed doing before abandoning the project, has been forecast to cost roughly $9 billion in addition to the purchase price of the existing pipeline and associated assets. That meant the total cost to taxpayers would be roughly $14 billion.”

Now some First Nations are looking to buy a 5l% stake for $6.8 billion. On a pipeline with no known final price tag. After all, the existing pipeline is decrepit and the new one doesn’t exist. Nice work Trudeau. Let me ask who is going to make the interest payments for these First Nations? Those are going to be at least $20 million a month.

“We need to get to a place where Indigenous peoples in Canada are in control of their own destiny, making their own decisions about their future,” said Prime Minister Justin Trudeau.
That’s how Trudeau is justifying this, and it won’t work. Indigenous people are best in control of our destiny when we control our land and water. This pipeline project is an exorbitant small pox blanket, really. The Trudeau West Pipeline (formerly known as Trans Mountain) will add about 162,536 million metric tons of carbon to the air annually. That’s what 800,000 barrels a day of tar sands oil gets you. That carbon is supposed to stay in the ground, not the air; a basic biology class will tell you that. The cost of removing the carbon from the air is about $l000 a metric ton. That liability is for someone to pay, most likely the pipeline owner. Also there is the cost and liability of spills, and costs to our First Nations and democracies for the brutality of militarization, criminalization and repression which will have to occur to put in these pipelines.

There is no way that the “Sovereign Wealth and Reconciliation Fund”, dreamed of by the First Nations, will have any money. Take it from me, by the time you all are done paying the interest and your financing, you’ll be deep into intergenerational debt servitude.
“If Canada is truly committed to reconciliation, it is time to walk away from this risky project,” Eugene Kung, Attorney for West Coast Environmental Law Firm suggested. “Canada already overpaid for this risky project, and now its value is even lower – it’s time to cut our losses and move forward on a different pathway for Canada’s clean energy future.”

After all, when the Navajo Nation rejected purchase of the aging Navajo Generating Station in April, they put up the 27 megawatt Kayenta Solar Project.