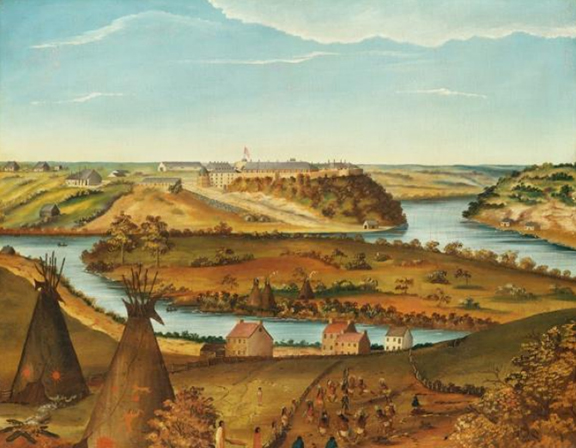 Starting Memorial Day weekend, two Minnesota Historical Society (MNHS) tours focusing on Dakota history at the site of fort Snelling and Bdote will begin. Bdote is Dakota for the place where two waters (Mississippi and Minnesota rivers) come together.

The Bdote/Dakota Homeland walking tour explores the landscape just outside the fort and the story of the land long before fort creation. A second guided tour will focus on the U.S.-Dakota War of 1862, and will cover the Fort’s role in the six-week war that forever changed the lives of Dakota in Minnesota. The topics will rotate with one of the days being devoted to Bdote, and the next day’s tours devoted to the 1862 War. Each tour will take 35 to 40 minutes.

The tours are part of a larger effort by MNHS to introduce more eras of history to visitors in addition to U.S. military history, which has long been the fort’s focus. The new programs are developed in preparation for Fort Snelling’s bicentennial in 2020.

What it means in essence is that the historical stage will expand to include more important players, said Kevin Maijala, director of experience development at the Minnesota Historical Society. For decades the programming focus at the fort has been U.S. military history even though Fort Snelling is the site of significant historical development for African Americans, and was always a sacred site to the Dakota at the river confluence.

In recent years, MNHS has moved away from a narrow historical perspective to a broader perspective that better includes the voices of the Dakota and African Americans. For example, during the 150th anniversary of the U.S.-Dakota War of 1862, programs were developed such as an art exhibit, photo exhibit, books, a museum display, and an oral history project, all with the help of Dakota. That’s true of these tours, as well; a few of the Dakota advisors from 2012 also serve as advisors on the tour and other American Indian-related topics.

Currently the Native American Initiatives department at MNHS is developing a permanent exhibit that will open in fall 2019 and feature the history of the Ojibwe and Dakota, as well as the influence of the Ho-Chunk.

Before then, however, you can get a taste of Dakota history occurring on the sacred land that also served as a site for the horrors of the 1862 war, undoubtedly the bloodiest chapter in Minnesota history. Most people never learned these historical lessons in the sixth grade when state history is usually taught, Maijala said. A small portion of those gaps could be filled with a walk this summer. Other topics at the fort include an expanded story of Dred and Harriet Scott and their struggle for freedom from slavery.

Admission tickets to the Historic Fort Snelling are $12 for adults, and $10 for seniors, vets and college students. Children age 5-17 are admitted for $6; children age 4 and under attend for free. MNHS members attend free of charge.

Vets and active military personnel may attend free of charge on Memorial Day. For more information, call 612-726-1171, or go to www.mnhs.org/fortsnelling. There is no additional charge for tours.