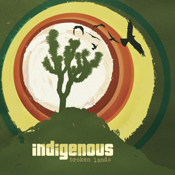 Is knowing you’re an egotistical, arrogant, self-centered, bike ridin’, blues lovin, obsessive compulsive mad man self-deprecation or self-awareness? I am condemned to a sun lit search for legendary,  stopping off at the Spyhouse for a cup of dark roast, the latest Indigenous CD Broken Lands loaded, the bike tuned-up, my heart aching for the freedom of wind and weather.

The trac “Eyes Of A Child”, a medium tempo blues shuffle with an

interesting chord modulation, is one of my favorites on the CD because

of the sentiment, and reminds me of something Stevie.  It’s a

to practice in my own living. “Don’t you wish you could see thru the

eyes of a child.”

In the song “Place I Know”, Mato sings, “walkin’ down the street, no

shoes on their feet, sometimes they’ve got nothin’ to eat, in this

place I know.”  Could be any reservation in North America, could be

life in any third world country on the planet. The Vanguard promo

material says, “One of the most compelling (songs) is ‘Place I Know,’ a

riff-rocker that decries the poverty and isolation of Reservation

“I love the way all of these songs came out, but ‘Place I Know’ is one

of the closest to me,” Nanji says. “It’s important to bear witness

that make you sad.”

female harmony vocals fatten up the flesh of something reminiscent of

experimenting, pushing the envelope and represents thinking outside the

and you don’t have to sound like dirt, whiskey and cigars in order to

have soul. When he sings “I can’t pretend to be the one for you” he’s

singing about integrity in a failing relationship.

jelousy in a romantic relationship. This is a well constructed song in

a form that resembles what has been termed Southern rock. My favorite

music in this world is the southern style of rockin’ a blues song. “I

just can’t hide the way that I feel.” It’s about wearing your feelings

song reminiscent of something Guitar Slim might have done that features

the room necessary for great playing. Mato sings, “Let it rain or let

it shine, all I want to do is spend my time with you.” Very cool and

licks with rush hour traffic, I am riding hard imbued with flesh and

when that happens, I go for a bike ride, bobbing and weaving through

traffic, looking at life through the eyes of a child, and running red

In The News, Indigenous In Music CD Review