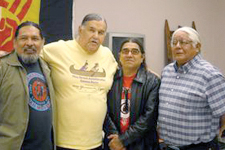 The American Indian Movement (AIM) gathered in June in Minneapolis to celebrate its 42nd year and to reflect on victories and the challenges still ahead. AIM founder Clyde H. Bellecourt pulled himself around, after undergoing six hours of surgery just days before the conference began. Visibly tired and weakened by the ordeal of combined kidney and gallbladder surgery, he nonetheless led discussions on AIM history and accomplishments to a group of 100 attendees from all over the U.S. and Canada.
A keynote address by Chief Terrence Nelson from Roseau River, Manitoba pointed the way to future AIM involvement in economic reforms and nation building. He said that Roseau River is part of the Pembina Band of Anishinaabe people who in their several bands live in several U.S. states and provinces of Canada. The issues of Anishinaabe people have most involved land, sovereignty, and resources, he said. Yet in 1903 land surrender at Roseau ripped thousands of acres away from the nation.
Nelson said the faulty process the crown used in taking the land. Many years later the Canadian Parliament modified the scope of application of the land management regime in the Indian Act. In 1996, 13 First Nations from British Columbia, Alberta, Saskatchewan, Manitoba and Ontario entered into a Framework Agreement on Land Management with the Minister of Indian Affairs.
Roseau was among those and it selected lands near Winnipeg, but not within the city limits. The process of selecting land is not yet complete but the economic advantage the nation now holds is vastly different from the struggle to farm the acreage of Anishinaabe lands held in 1903.
Nelson’s message was clear and forceful. AIM needs to enter into the development of wealth through economic projects and international trade. The future of AIM will be given to helping Native people help themselves out of poverty and dependence on public sources for assistance. It may take decades, but the vision needs to be adopted now, he said.
He touched on treaty rights and sovereignty, concluding with the statement that, “we had sovereignty before the treaties, we have sovereignty during the time of these treaties, and we will have sovereignty after the treaties.”
Other presentations at the conference included discussions of the AIM trademark, refinement of the guiding principles, spiritual leader teachings, a youth panel, an education panel and plans for the new Heart of the Earth Interpretive Center in Dinkytown – to open in 2013.
Bellecourt presented a history of AIM and its many activities over the decades. Millions of dollars flow through AIM founded nonprofit organizations each year, he said. He was joined by Jimbo Simmons, from San Francisco AIM, who spoke about work with other cultural groups, the work of the late Vernon Bellecourt, and travel to Libya to bring AIM’s message to the university system of that country.