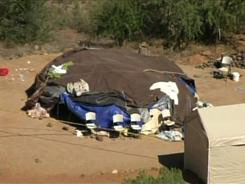 As Keeper of our Sacred White Buffalo Calf Pipe Bundle, I am concerned for the two deaths and illnesses of the many people who participated in a sweat lodge in Sedona, Ariz. that brought our sacred rite under fire in the news. I would like to clarify that this lodge, and many others, are not our ceremonial way of life because of the way they are being conducted. My prayers go out to the families and loved ones for their loss.

Our ceremonies are about life and healing. From the time this ancient ceremonial rite was given to our people, never has death been a part of our inikaga (life within) when conducted properly. Today, the rite is interpreted as a sweat lodge. It is much more than that. The term does not fit our real meaning of purification.

(people) were given seven sacred rites of healing by a Spirit Woman,

with the sacred Canupa (pipe) to our people, when our ancestors were

suffering from a difficult time. It was also brought for the future to

help us for much more difficult times to come. They were brought to

help us stay connected to who we are as a traditional cultural people.

The values of conduct are very strict in any of these ceremonies,

because we work with spirit. The Creator, Wakan Tanka, told us that if

we stay humble and sincere, we will keep that connection with the inyan

oyate (the stone people), who we call the Grandfathers, to be able to

heal ourselves and loved ones. We have a gift of prayer and healing and

another. The inikaga is used in all of the seven sacred rites to

prepare and finish the ceremonies, along with the sacred eagle feather.

The feather represents the sacred knowledge of our ancestors.

What has happened in the news with the makeshift sauna called the ‘sweat lodge’ is not our ceremonial way of life.

are put through a ceremony to be painted, to recognize that you have

purification. They should also be able to understand our sacred

language, to be able to understand the messages from the Grandfathers,

because they are ancient, they are our spirit ancestors. They walk and

teach the values of our culture in being humble, wise, caring and

What has happened in the news with the makeshift sauna called the “sweat lodge” is not our ceremonial way of life.

When you do ceremony, you can not have money on your mind. We deal with

that circle of ceremony. The heart and mind must be connected. When you

involve money, it changes the energy of healing. The person wants to

get what they paid for. The Spirit Grandfathers will not be there. Our

way of life is now being exploited. You do more damage than good. No

mention of monetary energy should exist in healing, not even with a can

of love donations. When that energy exists, they will not even come.

Only after the ceremony, between the person that is being healed and

the intercessor who has helped connect with the Great Spirit, can the

energy of money be given out of appreciation. That exchange of energy

is from the heart; it is private and does not involve the Grandfathers.

is acceptable. They can give the intercessor whatever they feel their

In our prophecy, the White Buffalo Calf Woman told us she would return

and stand upon the earth when we are having a hard time. In 1994, this

began to happen with the birth of the white buffalo. Not only their

nation, but many animal nations began to show their sacred color, which

is white. She predicted that at this time there would be many changes

upon Grandmother Earth. There would be things that we never experienced

or heard of before: Climate changes, earth changes, diseases,

disrespect for life and they would be shocking. There would  also be

Keeper if the oyate do not straighten up. The assaults upon Grandmother

Earth are horrendous, the assaults toward one another was not in our

culture, the assaults against our people have been termed as genocide,

and now we are experiencing spiritual genocide.

of 1978, our elders began talking to me about the abuses they have seen

in our ceremonial way of life, which was once very strict.

It is forbidden to film or photograph any of our ceremonies.

After many years of witnessing their warnings, we held a meeting to

address the lack of protocol in our ceremonies. After reaching an

the proper protocols, a statement was made in March 2003. Every effort

cultural people, because these ways are for our future and all life

upon  Grandmother Earth (Mitakuye Oyasin, all my relations), so that

they may have good health. Because these atrocities are being mocked

and practiced all over the world, we even made a film called “Spirits

intercessors for good health and well-being. It is up to that

intercessor. That is a privilege for all people that we gift for being

respect and appreciate what we share. The First Nations intercessor has

At this time, I would like to ask all nations upon Grandmother Earth to

please respect our sacred ceremonial way of life and stop the

In a Sacred Hoop of Life, where there is no ending and no beginning, namahu yo (hear my words).