Many Natives have tasted Native squash and enjoyed staghorn sumac, along with the tart/sweet delicious taste of chokecherries, but most people outside of Native communities have not had that pleasure. Thanks to two Native chefs and four Twin-cities professional chefs, nearly 100 guests of the American Indian College Fund who braved the cold weather and snow the evening of February 7 to attend the Twin Cities EATSS (Epicurean Award to Support Scholars) event were able to taste these delicious treats. The event highlighted the nutritious and delicious benefits of traditional Native American foods while also benefitting the American Indian College Fund, which provides access to higher education and more for Native students.

The event, promoted by Native American chef Sean Sherman of The Sioux Chef in Minneapolis and hosted by Ben Jacobs of Tocabe, an American Indian Eatery, in Denver, Colorado, tasked four Twin Cities area chefs to prepare create and share signature dishes to appeal to modern palates while harnessing the healthful and nutritious power of these local indigenous ingredients. Jacobs was stranded in Denver due to weather, and Sherman hosted solo the night of the event.

Sherman, born on the Pine Ridge Reservation in South Dakota, has been cooking across the U.S. and world for the last 30 years. His culinary focus has been revitalizing and creating awareness of indigenous foods systems in a modern culinary context. In 2014, he opened The Sioux Chef business as a caterer and food educator to the Minneapolis and Saint Paul area. In 2015 in partnership with the Little Earth Community of United Tribes in Minneapolis, he helped to design and open the Tatanka food truck, which features pre-contact foods of the Dakota and Minnesota territories. Chef Sean and his vision of modern indigenous foods have been featured in numerous articles and radio shows, along with dinners at the James Beard House in Manhattan and Milan, Italy. Sherman also teaches and shares his knowledge at Yale University, the Culinary Institute of America, the United Nations, and more.

Jacobs’ Tocabe restaurant enterprise has a food truck and is working on opening a third location – qualifying it to be the country’s largest Native American restaurant chain. Tocabe, An American Eatery expands on Jacobs’ Osage family’s recipes to create a new and unique take on American Indian cuisine. Jacobs works to support Native food professionals and communities by using Native-made ingredients whenever possible. Tocabe has been recognized by media outlets such as the Food Network and publications such as Food & Wine, The New York Times, The Atlantic, and many others.

Participating chefs included: Anne Andrus, Co-Owner and Chef of Honey & Rye Bakery; Beth Fisher, Executive Chef of French Meadow Café and Bakery; Thomas Boemer, Co-Owner and Chef of Twist Davis Group; and Joseph Holmes, Executive Chef of Red Stag Supperclub. All of them dished up flavors that are destined to become classics, and which, taken together, provided a full meal. 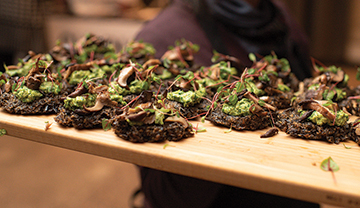 Joe Holmes started attendees off with flat bread with herbs, native squash, smoked trout, and chokecherry compote. Before the event Holmes said, “This will be my first time working with chokecherries and Native squash but being able to use ingredients that are indigenous to the region is always inspiring. As a chef, developing recipes with new ingredients is a challenge I eagerly welcome and playing with new flavors and textures fuels my creativity. The fact that these ingredients, being native to the region, are sustainably grown adds a sense of purpose to my work.”

Anne Andrus’s Native Squash Pie Bar finished off the meal for dessert. It included a shortbread crust and was topped with a spiced squash filling, crowned with a dollop of chokecherry whip cream, and a dusting of sumac powder.

Anne said, “I have experience cooking and baking with squash, yet when I received the native heirloom squash for this event, it almost felt new to me! The variety was so lovely and very rich in color, texture, and taste; a reminder to pause and enjoy the beauty that exists naturally in indigenous foods grown right here in Minnesota. The chokecherries were something that I hadn’t worked with before and I couldn’t help but focus on the fact that each one was so carefully harvested at the peak of their season, again, in our own backyard. Such an honor and pleasure to have this experience.” 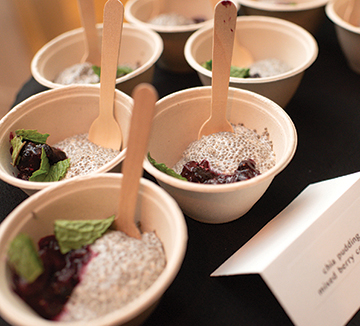 Guests also enjoyed the thrill of meeting Kevin McDermott, the long snapper for the Minnesota Vikings NFL team. He addressed the group to introduce the MyCauseMyCleats initiative in which NFL players can promote their favorite charity by wearing custom cleats. McDermott chose the American Indian College Fund and offered up his custom cleats from the Minnesota Vikings vs. the Miami Dolphins game in 2018 for bidding.

McDermott shared he chose the College Fund as his featured charity because his family, based in South Dakota for generations, has long-supported Indigenous causes, and passed that respect and passion on to him. “All Americans, no matter their heritage, can do more to support indigenous organizations like the College Fund, which do not get the awareness or funds they deserve. Higher education changes lives. It has the power to transform families and communities. And it is a luxury not everyone can afford,” McDermott said.