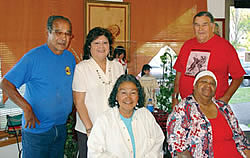 Recent changes at Elders Lodge (an independent living community in Saint Paul that is supposed to provide affordable, service-enriched housing for low-income adults age 62 and older) include new staff and an expanded Board of Directors.

The positive changes came as a result of concerns over neglect and mismanagement and were celebrated with a Spring Feast.

Among the concerns: residents felt unsafe because non-residents had

keys, there were strangers drinking in the halls, and Wilder Foundation

staff (who manage Elders Lodge) mediated disputes based on stories

rather than evidence because there were no cameras. Residents also

from her Wilder Foundation position after an October 2007 complaint

with the St. Paul Department of Human Rights, was incompetent and

emotionally abusive to some elders. (She couldn’t be reached for

comment, and Wilder Foundation does not discuss personnel issues.)

“She was a controller. It was her way or no way,” said an elder who

wished to remain anonymous. “One time she ordered a woman to stay in

her room for months.”

That previous manager also brought paperwork from Wilder Foundation to

the Board members. At the time, many of them were residents and

neighbors without board experience. “She would be in a rush and give us

papers,” said another elder who asked to remain anonymous. “She told

people to sign papers when we didn’t know what they were.”

In 2007, some elders grew concerned when the Board Chair was also the

brother of that manager’s boyfriend. The conflict of interest appears

to have added to the intimidation and lapses in oversight.

department does not discuss closed cases. However, a Pre-Determination

Settlement Agreement from his office established initial criteria for

Elders Lodge, a public housing project that brings together four

1) Elders Lodge Corporation (ELC), a nonprofit governed by the Board of Directors, which owns the land and building;

2) the U.S. Department of Housing and Urban Development (HUD), which

funds the building as Section 202 affordable housing for low-income

elderly. Tenants pay 30% of their income, and HUD provides rental

assistance and reserves for improvements and repairs;

3) the Amherst H. Wilder Foundation, which manages the site. HUD

requires an experienced management agent for all its projects, so the

Board has maintained a contract with the Foundation since the Lodge

4) and a Resident Council to represent the concerns of tenants. Its

existence and right to privacy are protected not only by HUD

regulations, but also by ELC Bylaws.

Since the complaint, the Board, Wilder Foundation, and Resident Council

have made an effort to develop a more responsive, working relationship.

The settlement agreement between the Department of Human Rights and

Wilder Foundation contained a provision for an expanded Board with an

option for future board training. New Board members include Norma

stipulated that Wilder Foundation work with the Board to provide more

and a sweat lodge.

“We want to have cultural events at least twice a month,” said

Bellecourt. “If loved ones are in the hospital or an elder is in

mourning, we want to support them.”

Wilder Foundation was also expected to repair the intercom and install

were allocated; to update all emergency contacts annually; and to write

a job description for the newly vacant Housing Manager position and

advertise it in Native American media.

The Board has already overseen the installation of cameras and a

Wilder, said much of the work was paid for by Wilder Foundation as a

With the positive momentum and new board members, the Resident Council

hopes to be a more integrated partner. They believe they have a unique

perspective, and the original Elders Lodge mission was to create a home

where elders could share their wisdom and spiritual traditions with the

Grace Smith, who served as a catalyst for change, hopes for further

improvement. “I’m tired of the elders suffering,” she said. “They have

little power or formal education, but people have to respect them and

their Native American beliefs. We’re moving in a better direction, but

it takes a while.”

One obstacle to more improvements is the ELC debt. Although it is

manageable and Renville says the Board will eliminate it, ongoing debt

has lingered between ELC and Wilder Foundation. The debt has multiple

sources. It began in 1997 when the ELC Board split from EarthStar, the

sponsor organization that did the initial fundraising to create Elders

Lodge. As construction proceeded on the $2.9 million project, the two

Boards sued each other over EarthStar finances, ELC Board membership,

and money from bingo at Pot O’ Gold Casino.

In the meantime, Wilder Foundation was signed to provide services and

worked several months without payment because of the lawsuits. So ELC

owed money from the first contract.

that to drop, but the expense of maintaining the building remains the

same. HUD has asked Wilder Foundation and the Board to correct this

with better marketing and outreach.

Another source of debt is the lack of fundraising. Wilder Foundation

does not apply for grants on behalf of Elders Lodge. The decision to

seek grants must come from the Board, but ELC needs initial funding and

supervision to move ahead because grants require monitoring and

Renville promises the Board will develop a vision and strategic plan

that include new revenue streams. “It takes time. We need trainings and

surveys,” said Renville. “We need solid roots so the tree can bloom.”

Both Renville and Glass said the expanded Board represents a strong

cross-section of the community and will be attentive to these details.

Due to past experience, some elders worry Wilder Foundation won’t make

Elders Lodge a top priority. There have been late reports to HUD,

But overall, the elders appreciate the improvements and are grateful

for the new staff.

Elders are particularly pleased with the housing manager, Susan

LeClaire (Rosebud Lakota). She helped organize the Spring Feast for the

annual meeting in May, which began with drummers from Anishinabe

Academy and a blessing by Jerome Otter Robe.

Before the feast, Renville (Board Chair) welcomed everyone, and Glass

(Board Treasurer) presented the financial review for fiscal year 2007.

Another welcome change was the hiring of a new site responder, Cory

Matlock (Blackfoot and Cherokee) who lives at Elders Lodge and provides

that wakes are being held at Elders Lodge again. Bodies were not

always brought for mourning ceremonies, but the Board has directed

Wilder Foundation to allow for this practice. “Wilder is here to help

said. “So we want to honor the different Native and tribal cultures.”

The Board also arranged for a recent Midewiwin water drum

ceremony. Additional signs of renewal include the money and seeds

elders received to plant gardens, and LeClaire updated the lobby and

(Hunkpati Dakota and Caddo). “We all share, we help each other. We want

to create a cooperative way of living. This is what we want our future

to visit, offer donations, provide activities, or host events at the

lodge. They invite Native American groups to consider the elders.

“Many elders need transportation to activities. They do not have cars

or they need equipped vans,” Renville said. “We need to remember our

elders as we plan events.”

sometimes struggle with the business and finances, they are often more

interested in the tenants and their families. They usually get more

and unity to their home. They also hope recent changes lead to more

consistent Board and community involvement.

“We still have a long way to go, but we’re grateful for Susan and

Cory,” said Smith. “It gives me strength to see the elders talking and

active. They have had enough neglect.”

More than financial aid for Natives and Indigenous students at Augsburg