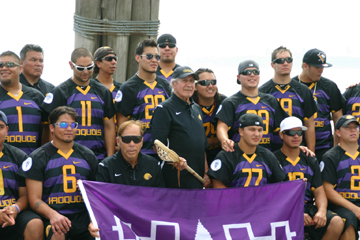 The fourth-ranked team’s refusal to travel on another nation’s passports sidelines it from a championship, but nets a teachable moment on Native sovereignty. In the doldrums of summer, a news story involving the travel obstacles of a world-class Native lacrosse team introduced the wider public to the Haudenosaunee Confederacy – inventors of the game – and to their tradition of traveling internationally on their own nation’s passports.
The Iroquois Nationals, a lacrosse team made up of 23 players representing each member nation of the Haudenosaunee, also known as the Iroquois confederacy, were barred from traveling to the world championships in Great Britain on their Haudenosaunee passports, despite an offer of a one-time travel waiver from U.S. Secretary of State Hillary Clinton. After British officials refused to issue visas to the Nationals, ranked fourth in the world, more than 2,000 news reports told the story of the team that resolutely refused to travel on U.S. or Canadian passports.
The Haudenosaunee passports, some partially handwritten, do not include new security features, including computer chips, which are expected in the post-9/11 era. But the team had traveled internationally without incident until now, which made the British and Canadian refusal so close to the tournament surprising. 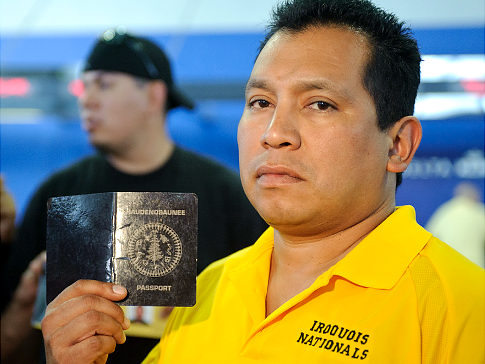 For the Iroquois national team, traveling on a competing nation’s passport is unthinkable. “You are asking us to denounce our citizenship for a game,” said Percy Abrams, the Nationals’ executive director. “When you come back from the game, guess what? We have denounced our citizenship. Is that what they would do?”
Passports, flags and identity cards are historically important symbols of the functioning governments of Indian nations, said Tim Johnson, associate director for museum programs at the Smithsonian’s National Museum of the American Indian. Since last year the museum has collected more than 200 flags from Indian nations across the United States and Canada, which are hung in the Potomac Atrium during the month of November.
“What’s difficult for the average American to understand, and what kids don’t get in their education,” Johnson said, “is that these documents are each a symbol of functioning American Indian governments that meet regularly and govern all the time.”
The museum had planned to show the Iroquois Nationals’ televised games from the 2010 World Lacrosse Champion-ships in Manchester, England, on screens in its Mitsitam Cafe. But on July 15 when they were scheduled to face off with England, the Nationals were in New York City, still awaiting permission to enter Great Britain. On National Public Radio, S.L. Price of Sports Illustrated said, “To not have the Iroquois at the world championship is something that I feel would delegitimize the world championships.”
The history of the Haudenosaunee traveling on their passports – and facing opposition from Great Britain, and Canada as a member of the British Commonwealth – is a long one, explained Johnson.
The Haudenosaunee Confederacy, spanning land in both present-day New York and Ontario, is a formal government established a thousand years ago. As such, it is the oldest continually operating democracy in North America, states Oren Lyons, Faith Keeper, Turtle Clan of the Onondaga Nation, on the team’s website. (Lyons, 80, was himself an All-American goalkeeper who played on the 1957 national championship Syracuse University lacrosse team with Jim Brown.)
The Haudenosaunee hold some of the earliest treaties with the U.S. and earlier colonial powers. A 1613 agreement of peace was entered into by the Haudenosaunee with the Dutch, and a wampum belt was woven with two parallel lines to document this agreement of non-interference. It’s a policy document founded on principles of sovereignty, Johnson said, that children among the Haudenosaunee are taught to this day.
“From a historic standpoint the Haudenosaunee have never relinquished their sovereignty,” said Johnson, who is Mohawk. “They have never stated they are anything other than themselves. There exists a consistent chronology of Iroquois leadership making repeated assertions of sovereignty.”
In 1921, Cayuga Chief Deskaheh presented a Haudenosaunee passport to travel to Great Britain to seek aid against Canadian aggressions. He sought to speak to King George V because the treaty by which his people had their rights guaranteed was signed by George III. He was refused a meeting, and returned home, according to the 1978 book, “A Basic Call to Consciousness,” edited by the newspaper Akwesasne Notes.
In 1923, Deskaheh traveled to Geneva on his Haudenosaunee passport in the hope of speaking to the League of Nations about the violation of rights of Indian nations. But while the city of Geneva accepted him, the League of Nations refused to hear him.
In 1924, the U.S. passed a law making all American Indians citizens of the U.S., and the Royal Canadian Mounted Police invaded the Six Nations to overthrow its traditional government. The Haudenosaunee notified both the U.S. and Canada that they would not accept citizenship in any other nation besides the Haudenosaunee.
In 1977, Oren Lyons traveled on a Haudenosaunee passport to Geneva, this time to address the non-governmental organizations at the United Nations. And Haudenosaunee leaders have traveled on these passports for the 30 years since, Johnson said.
The Iroquois Nationals program was founded in 1983 as a league that would organize and support the playing of lacrosse among Six Nations youth. Lacrosse, considered by the Haudenosaunee to be given to them by the Creator, is estimated to be at least 900 years old, one of the oldest games to originate in North America.
The Iroquois Nationals were admitted to the International Lacrosse Federation, the governing body of international lacrosse, in 1990. The Nationals placed fourth in the 1998, 2002 and 2006 World Lacrosse Championships, traveling internationally on Haudenosaunee passports even after the 9/11 terrorist attacks made passports and identity cards more highly scrutinized.
But why would Great Britain, which gave the world “Chariots of Fire,” an Academy-Award-winning movie based on the life stories of 1924 Olympians Eric Liddell and Harold Abrahams – one of whom competed for his Christian faith and the other to fight anti-Semitism – fail to grasp the Iroquois Nationals’ quest to compete?
Like these athletes of old, the Iroquois team stands for more than just sport, Abrams said.
“The Iroquois Nationals serve as a declaration of our status as a sovereign nation that exists on the North American continent, which we call the Great Turtle Island,” Abrams said. “We compete nation against nations.”