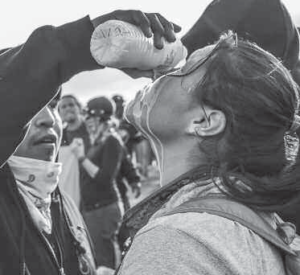 ST. PAUL, MN – Members of the Prairie Island Indian Community filed a lawsuit against the U.S. Department of Interior in November following the federal government’s recent refusal to acknowledge the Mdewakanton Sioux Indians of Minnesota.

2) Restoration of possession of the 12 square miles of public lands in Minnesota set apart by the secretary of the interior in 1865 for the Mdewakanton Sioux Indians of Minnesota; and

3) Federal land assignment system for the Mdewakanton Sioux Indians of Minnesota at Prairie Island and elsewhere.

Located near the Black Hills, Bear Butte is one of many sites sacred to the Lakota people. In the past, Native people have tried to protect the site from having biker bars built as it base and other intrusive developments.

The Rosebud Sioux Tribe, Southern Cheyenne and Arapaho Tribe of Oklahoma, and the Northern Cheyenne Tribe of Montana worked to outbid 21 others bidders to purchase the land for nearly $1.1 million.

There are no plans to develop the land and the purchase would prevent the construction of any biker bars at the base and near sacred site.

BISMARCK, ND – Politicians in North Dakota are punishing tribes and their supporters for resisting the Dakota Access Pipeline. The North Dakota Legislative Management Committee canceled the 2017 tribal leader address to the state Legislature. Republicans said safety concerns at the State Capitol were the reason.

The tribal leader address takes place every two years, at the start of each legislative session.

Chairman Richard McCloud of the Turtle Mountain Band of Chippewa Indians said, “I’ve heard rumors that it’s going to be a difficult session this year specifically for Indian Country because of what’s going on in Standing Rock, that all the tribes would be paying the price.”

Chairwoman Myra Pearson of the Spirit Lake Nation was due to deliver the 2017 address. She told The Herald that relations have deteriorated to the point that she was recently refused entry to the State Capitol amid a Dakota Access protest.

“I was asked to leave. I was removed from there. I’ve never been back there,” Pearson told the paper. “I don’t even go to Bismarck for meetings anymore.”