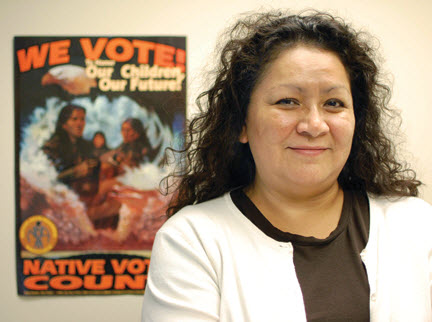 Civic participation in Indian county appears to be on the rise. In Bemidji, there are Native American candidates running for the state Senate and House of Representatives. A Native American is running for Bemidji city council and another is seeking a seat on the county board.
Among the candidates is Nicole Beaulieu, a 23-year-old member of the Leech Lake Band of Ojibwe. She’s challenging state Rep. John Persell, DFL-Bemidji in House District 4A.
“There’s a huge gap from the poor people and the people up here that have all the cash and all the money and all the clout, political clout,” Beaulieu said. “And that really needs to be changed.”
Beaulieu has teamed up with Red Lake Band member Greg Paquin, who is running against State Sen. Mary Olson, DFL-Bemidji, in Senate District 4. The two challengers share some common interests. They support using affirmative action policies to create more jobs for Native Americans. They rail against what they call “institutional racism.”

Native Americans have historically been among the least likely groups to participate in politics. They’ve only had the right to vote in the United States since 1924. Historically, Native Americans have aligned themselves with the Democratic Party. On the Red Lake Reservation, for example, close to 90 percent of voters cast ballots for DFL candidates.
But Beaulieu and Paquin are challenging DFL incumbents. When they failed to win the party’s endorsement at its local convention, they decided to form their own party. They call it Warriors for Justice.
Both the House and Senate districts include parts of the Red Lake or Leech Lake reservations. Beaulieu said the DFL takes Native American voters for granted. “They take our votes and they forget us after Election Day,” she said. … “That’s why we started this Warriors for Justice. Because we can take this Native American vote and everybody who feels neglected from the DFL party, and we can put it towards a candidate and a party that’s going to actually represent the hardworking people.”
It doesn’t appear Beaulieu and Paquin are drawing large support from the Native American community. And DFL supporters don’t seem worried about a challenge from the fledgling new party.
Michael Meuers, former chairman of the Beltrami County DFL, thinks the party’s stronghold in Indian Country is pretty much in tact. Meuers said Native Americans are deeply involved with the DFL party and have held top party leadership posts. He said it’s clear the Indian community is becoming more active in politics.
“The Beltrami County DFL gets nine delegates to the state convention, and a majority were Indian this year, which I’ve never seen before,” Meuers said. “They’re active, they’re showing up, they’re casting their votes and they’re getting very politically sophisticated.”
Meuers said the trend started back in the late 1990s, when local Indian reservations recognized they had some potential political power in their voting block. In 1996, a strong turnout on the Red Lake Reservation helped elect the first Indian county commissioner in Minnesota. That seat is still held by an Indian, largely because of the Native vote.
Since then, voters elected an Indian as county sheriff. They elected an Indian to the school board. In Cass Lake, they elected that city’s first Indian mayor. The key to the newfound political clout in Indian Country has been a very deliberate effort to get tribal members to the polls, said Sally Fineday, executive director of the Native Vote Alliance of Minnesota. The non-profit organization aims to empower Native Americans through civic engagement.
Fineday is also running for a seat on the Beltrami County board. She said reservations in northern Minnesota have discovered they are significant swing voters.
“We’re beginning to understand that, you know what? If we actually do this, holy cow, we actually have people that are coming to us and they want to know what are our opinions about our community,” she said. “We are definitely increasing Native Americans’ interest, and we’re definitely engaging Native American communities in rural areas to become more actively involved.”
The Native Vote Alliance of Minnesota works with most Indian reservations in the state, helping them organize voter registration drives, get out the vote rallies and non-partisan door-to-door campaigns.
Nationally, the National Congress of American Indians is pursuing similar goals. There’s also a partisan group called the Indigenous Democratic Network, commonly known as INSN’s List (indnslist.org). Kalyn Free is president of the Oklahoma-based organization, which got its start in 2005 and sponsors annual camps to teach Native American candidates how to win elections and raise funds.
Free said the network aims to increase the number of Indians running for and winning elected offices at the local, state and national level. The organization primarily supports Democratic candidates
“Since we started, we have helped elect 45 Indians to state and local office across the country,” Free said. “We have a 70 percent win rate and, although we’re never satisfied, we’re very pleased with what we’ve done in the last election cycle. This election cycle we have a little over 50 tribal members that we are monitoring across the country.”
Free thinks Indian Country is in the midst of a political awakening as voter participation and candidate interest increases. She credits President Barrack Obama for helping spark more political interest within Indian communities.
In 2008, then-candidate Obama campaigned heavily for the Indian vote and visited several Indian reservations. His administration has place tribal members in key positions and has been open to hearing from tribal leaders about Indian concerns, according to Free. “I think that is very inspiring to Indian Country, to say, ‘okay, we can rise to the highest levels by flexing our political muscle,’” Free said. “But we still need, we still have so far to go. I think there’s 37 states in the country that don’t have a single tribal member serving in the state Senate or the state House. Wisconsin is one of those. Minnesota is one of those.”
There are roughly 35,000 eligible Indian voters in Minnesota. But there are few statistics for how many of them actually show up at the polls. Several Native organizations are working to compile those numbers.