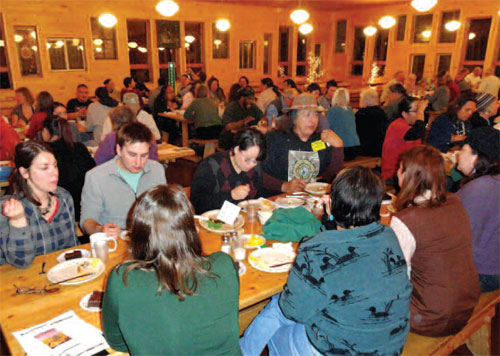 Indigenous farmers and gardeners from the region and beyond gathered at the 9th Annual Great Lakes Indigenous Farming Conference in March to share knowledge, stories, and of course, their seeds.
More than 100 native people, organic farmers, students, and community members participated in the conference hosted by the White Earth Land Recovery Project held on the White Earth Reservation in Northern Minnesota.
"I had a Hopi Squash run up a tree last year," Frank Kutka, USDA Sustainable Agriculture representative told a small group during one of the workshops held at the conference. Describing the squash's prolific vines he said, "Sometimes that third sister doesn't hang back, she just moves ahead."
Many farmers like Frank told their stories, sharing not only cultivation but history. For fourteen years, Caroline Chartrand, a Metis woman who traveled from Winnipeg to the conference, been looking for heritage seeds of the Metis people of Canada. It is believed that in the 1800s the Metis grew some 120 distinct seed varieties in the Red River area.
Of those, Chartrand said, "We ended up finding about twenty so far. We found a few of them through the Canadian Seed Bank. We found some more through Seeds of Diversity Canada, the Canadian Seed Exchange, and the US Seed Saver's Exchange."
The Canadian seed story is sobering: Three quarters of all the seeds that existed before the 20th century are extinct. And, out of the remaining quarter, only l0% are available commercially from Canadian seed companies. Over 64% of the commercially held seeds are offered by only one company, which means that if the variety is dropped the seeds may be lost. The rest are held by backyard gardeners and families.
A recent article by a prominent Canadian writer suggested that agriculture in Canada began with the settlement of Europeans. Chartrand had to ask her, " What about all that agriculture before then?" 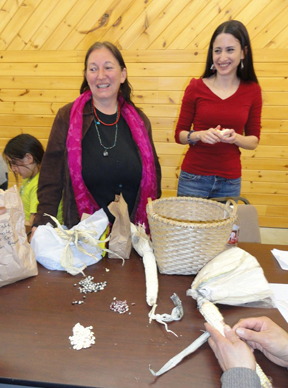 Chartrand is a committed grower in the effort to recover northern Ojibwe corn varieties, which once grew l00 miles north of Winnipeg Canada. The most northern grown corn in the world. "That's some adaptable corn," said one of the participants. Betsy McDougall of Turtle Mountain commented, "We Ojibwes, Metis and Crees must have been really good farmers."
"Those seeds are the old ways. They gave our ancestors life for all those years. I'm totally for preserving the old ways," said Frank Alegria, Sr. As the son of migrant farm workers, Alegria has been gardening since he could walk and farming on the Menominee reservation in Wisconsin since he was sixteen. Now an elder, he continues to grow out native varieties, including an 850-year-old squash variety found in an archaeological dig near the Wisconsin border.
Deb Echohawk, Keeper of the Seeds for the Pawnee Nation of Oklahoma, told the story of the sacred corn seeds of the Pawnees. Varieties thought to be lost forever are now finally recovering for her people. By combining efforts with the descendants of settlers who live in the traditional Pawnee homelands in Nebraska, the Pawnee identified keepers of the seeds, including Echohawk.
Indigenous farmers from the Winnebago reservation in Nebraska shared their story of genetically modified organisms (GMOs) encroaching on their fields, threatening to alter and potentially sterilize open-pollinated corn. While native corn varieties are more rich in protein and much more resilient to climate change, they are not immune to GMO contamination. The advice shared amongst farmers was to eat from the edges and save seed from the middle where it is least likely to be affected by cross pollination.
Despite the challenges to maintaining native varieties, organizations such as Seed Savers Exchange have triumphed in maintaining a diverse seed catalog. John Torgrimson, Executive Director of Seed Savers Exchange, talked about the organizations' humble beginning in 1975, start by a small group of committed individuals in Decorah, Iowa. Over 35 years later, they now preserve and grow out over 25,000 varieties of unique vegetables, fruits, grasses, and even a heritage cow breed at their 890 acre Heritage Farm.
Likewise, the White Earth Land Recovery Project is working with a number of tribal members and local farmers to grow out five or six corn varieties adapted for this region. The North Dakota State University also contributes to this project. The first variety is a Bear Island Flint from nearby Leech Lake Reservation which has grown well in the region for the past five years. White, pink, and black varieties are also being grown out. One of the greatest challenges today for heritage corn growers is competing with raccoons and deer. A farmer at the conference chuckled as he mentioned seeing the animals strut past the more abundant GMO corn to feast on the native variety.
All participants that the conference were invited to join a working group that gathered several times throughout the weekend to envision a regional seed library and to map out a plan for co-creating the library. At the table were tribal members from White Earth, Red Lake, Leech Lake, Bad River, Menominee, Standing Rock, as well as the Winnebago of Nebraska and many other reservations.
Also involved in the discussion was the keeper of seeds for the Pawnee tribe, and the executive directors of Seed Savers Exchange and Seeds of Diversity (Canada). Many others joined the discussion including a Midwest coordinator for USDA's Sustainable Agriculture Research and Education Program, local allied growers, representatives from University of Minnesota, and various tribal colleges.
To learn more about the Great Lakes Seed Library or the Northern Indigenous Seed Sovereignty group, email: northern-indigenous-seed-sovereignty@googlegroups.com.