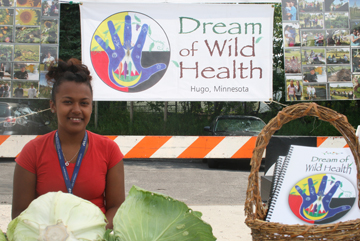 Two new farmers markets serving the Twin Cities American Indian Community have sprung up in recent weeks. These unassuming produce stands, comprised of just one or two tables each, would be easy to miss. It would be a mistake, however, to equate the humility of these burgeoning enterprises with their potential impact. These markets are, in fact, the final link in a grand, multi-generational vision that has sought to restore the once prominent notion of food as spirit-nurturing medicine.
Much of the produce offered at the Unci Maka (Grandmother Earth) Indian Farmer’s Markets has been grown by Native farmers from heirloom seeds preserved by Potawatomi elder Cora Baker.
Baker, who passed away in 2000, was born in Michigan, raised a family in Wisconsin, and lived her later years in Nebraska. She preserved Native seeds everywhere she went. Many people gifted their corn, bean, and squash seeds to the woman who became known as the Keeper of the Seeds. She eventually collected over 90 varieties of Native seed.
Five months before her passing Baker wrote a letter to Dream of Wild Health, a ten-acre farm in Hugo, Minnesota dedicated to the revival of traditional farming.
“I prayed and prayed that someone would take this gardening up again. I am very pleased to learn about your project. I feel that the Great Creator has answered my humble prayers. With the help of my great grand-daughter and grandson, we set out to help you. I wish that someday the children will come to realize the importance of the garden,” Baker wrote.
Today, Native American youth, known as “Garden Warriors” spend three days a week at Dream of Wild Health, performing all of the duties required in growing organic food – from planting, to harvesting, to bringing produce to market and selling it to the community at the Unci Maka Indian Farmer’s Markets.
On a recent Thursday morning along St. Paul’s Payne Avenue (one of two places where the youth sell their vegetables) 18-year-old Tatiana Williams (Lakota) tends the Unci Maka stand. In her third year as a Garden Warrior, Williams says selling vegetables to the public represents a completion of her education as a Native gardener.
“I’ve learned how to produce healthy foods and how to make them taste great. I’ve learned about my culture, how to use tobacco, how to grow and dry it, and how to pray,” Williams said.
Tatiana and the 64 others that have participated as Garden Warriors since 2005 have also learned other practical life skills at Dream of Wild Health.
“They receive a pay check for their participation. So we have a bank representative come to the farm and teach them about financial literacy. They open accounts so they have somewhere to cash their checks and manage their money,” says Diane Wilson, the farm’s operations director.
Wilson says the Garden Warriors are chosen from throughout the Native community. “We get kids from Little Earth, throughout St. Paul, lower-income neighborhoods, foster homes – some have very hard stories. We help them prevent diabetes and obesity, by learning to change their relationship to food, by learning how to plant, harvest, cook, and sell food.”
At the second Unci Maka market sight in Minneapolis, the Garden Warriors are joined by student farmers from Nawayee Center School. The Native-focused public school at 2421 Bloomington Avenue South took a vacant lot a few years ago and converted it into a bountiful garden.
Center School students have also published a cookbook with their favorite recipes which is sold for $2 at the market. Recipes include: “Chilled Wild Rice Cranberry Salad,” and “Ta’Lana’s Ultimate Banana Split,” named for the student who invented the sweet concoction.
Nawayee Center School’s director Joe Rice says it took a leap of faith to invest precious educational resources in the garden project, but that the risk has definitely paid-off.
“When I see these kids taking care of our garden, growing these wonderful foods, and out selling those foods, acting like adults in the way they interact with customers, it gives me a lot of hope for the future,” said Rice.