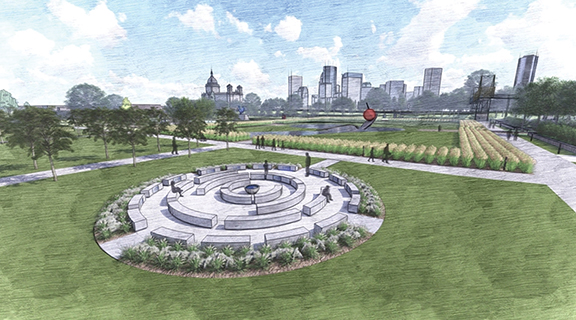 For a time in 2017, the northwest corner of the Minneapolis Sculpture Garden was the scene of protest and controversy. Then it stood empty and waiting. In October, it will become a place of respite, gathering, learning and healing.

A new work by Dakota artist Angela Two Stars, “Okciyapi (Help Each Other),” will invite people to sit, stroll, meet and engage with the Dakota language. It will be sited where artist Sam Durant’s “Scaffold” once stood.

A free public park, the Sculpture Garden is a partnership between the Minneapolis Park & Recreation Board and the Walker Art Center. The Walker curates and cares for the art. The appearance of “Scaffold” in May 2017 led to a public outcry, widespread condemnation, national headlines, a delay in reopening the Sculpture Garden after a multimillion-dollar renovation, the resignation later that year of the Walker’s executive director, Olga Viso, and, arguably, the practice today of introducing arts events with land acknowledgments.

Durant’s sculpture referenced several gallows used in U.S. government executions, including one in Mankato, Minnesota, where the largest mass execution in our nation’s history took place: the hangings of 38 Dakota men on Dec. 26, 1862. To Native people, its presence was intolerable and traumatic. To many others, it was tone-deaf and offensive. The sculpture was dismantled and removed, and its place in the Sculpture Garden was grassed over.

In January 2019, the Walker launched an Indigenous Public Art Commission with a call to artists, seeking proposals for a new public artwork for the Sculpture Garden or elsewhere on the Walker campus. More than 50 national and international submissions were reviewed by the Walker curatorial staff and an Indigenous Public Art Selection Committee, a group of Native curators, knowledge keepers, artists and arts professionals. Two Stars’ proposal was chosen. The plan called for installation in the fall of 2020, but the pandemic intervened.

Two Stars is a member of the Sisseton Wahpeton Oyate and director of All My Relations Gallery in Minneapolis. Her work as a visual artist has been shown at the Sioux Art Museum in Rapid City, South Dakota, the Watermark Art Center in Bemidji, and All My Relations, among other spaces. In 2019, Two Stars collaborated with Mona Smith and Sandy Spieler on the public installation of Dakota artwork along the southeast shore of Bde Maka Ska. This will be her first work at the Walker.

“Okciyapi (Help Each Other)” will be a sculptural form of pre-cast engraved concrete, enameled metal panels, script and audio Dakota language and medicinal plants native to Minnesota. A water vessel in the center will remind visitors that the name “Minnesota” comes from the Dakota phrase “Mni Sota Makoce,” or “the land where the water reflects the clouds.” As you move through the piece, you’ll be able to hear stories told by Dakota speakers on your phone.

From above, “Okciyapi (Help Each Other)” will look almost like a maze, or a labyrinth in a Gothic cathedral.

About the location of the piece within the garden, Two Stars said, “I specifically chose this site with the awareness that there was a need for healing, for both the community and the land itself. As part of the installation process, my family led a ground cleansing ceremony at the site, to help all of us to move forward in positivity and celebration.”

Walker Executive Director Mary Ceruti said that Two Stars’ sculpture “makes poetic connections between land, water, and language and creates a welcoming site of reflection. … The work adds an important Indigenous voice to the diverse group of artists from around the globe whose work is presented there.”

The public unveiling will take place on Saturday, Oct. 9.