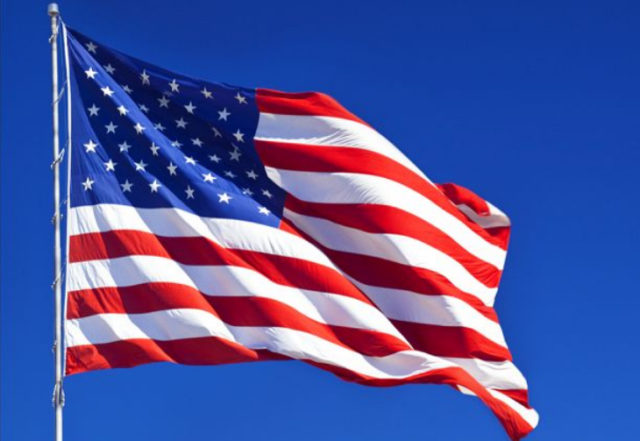 Teresita Diaz, 17, a junior at Park Rapids Area High School in northern Minnesota, wants you to know she’s not disrespecting the flag when she sits down and quietly faces it while others recite the Pledge of Allegiance, perhaps without thinking about the words they’re saying.

“I started thinking more about the words and what it means, and and I realized I don’t really agree with parts of the pledge and I don’t want to stand up for something that is not true,” she tells the Park Rapids Enterprise today. She grew up on the White Earth Reservation, where they don’t say the Pledge of Allegiance at school, so when she moved to Park Rapids, she stood with other kids too before she thought about what she was saying.

“‘One nation under God’ wasn’t even in the original pledge,” she said. “Not everyone in the United States has that belief. It’s like when they came across the ocean and made us believe in Christianity.

I’m not saying you’re wrong if you believe in God, but I don’t think it’s right to put that in there because not everyone shares that belief. There are atheists and there are different religions.”

The second part she “100-percent does not agree with at all” is “liberty and justice for all.” “Through the years, America has gotten way better giving women and African Americans rights and letting Native Americans be citizens, but there’s still a lot that needs to be changed.

I believe that if there was justice for all then there wouldn’t be stuff going on like, Native Americans fighting to not have a pipeline because it violates one of their treaties, or people protesting about African Americans being shot by police officers over putting their hand by their pocket.

If there was justice for all, people wouldn’t be putting down immigrants just because they came from someplace else. It’s not right.”

Unsurprisingly, she was criticized for disrespecting the flag. “The flag’s really important in our Native American culture,” Diaz tells the Enterprise. “We have it at every powwow raised higher than any other flag and we have songs set aside specifically for the flag that everyone stands for. Sitting down for the pledge isn’t saying I don’t stand for the flag. I stand for the flag, just not for what the Pledge of Allegiance says. “If you ask every Native American student who is here if they know someone who’s in the military, I guarantee they are going to say their uncle or aunt or grandpa were.”

It was a culture shock when she moved to the area because of its segregation, she said. “They grew up doing the pledge and knowing you’re supposed to stand so they think that’s all that’s right, so when they see someone else sit down they get really angry, but they don’t even understand why. Half the people who got mad don’t even know why they’re standing or what they are standing for.

They could have an Ojibwe or Hispanic culture class here. We need something to help people learn more about others. A lot of people don’t know about Native Americans. When we come here, nobody talks to us. They don’t know anything about our culture because they don’t ask and nobody teaches them.

We come and we’re like the outsiders and it’s like going to a small reservation school my whole life everybody knows how you feel and then you come here and it’s complete culture shock because there are so many people and you’re basically alone.”

Her school is trying to change that, the Enterprise says. A Native American education class has been created, and Native American speakers are invited. And two powwows were held in mid- March.

“One of the things about Native Americans that’s really nice is like when you go to powwows if you’re not of the Native American race, no one’s going to look at you funny like you can’t be here because everybody is accepting,” she said.

“Anyone can go out and dance. You don’t even have to have an outfit. Two years ago, I brought my friend who was white and I let her wear my old regalia so she could go out and dance, and everybody thought it was nice that she was interested in our culture.”