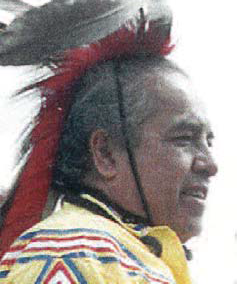 David was born December 3, 1941 in Pipestone, MN to David J. and Emmarica (Wabasha) Larsen. He served in the US Navy as a radar operator from 1960- 1964. David was a strong passionate man who loved and dedicated his life to his Dakota community and to Indigenous people worldwide. His passion took many forms. He was an educator of Dakota History and Culture at the University of Minnesota in Minneapolis and Minnesota State University Mankato. He taught and mentored Indian Students at Redwood Valley High School and most recently at Columbia Heights Schools.

David was elected to the Lower Sioux Tribal Council and served three terms as Chairman. He was instrumental in bringing the first real revenue to Indian communities by initiating Indian gaming in the state of Minnesota. His commitment was unending. He served as spiritual advisor for Native men and women at MN Correctional Facilities, and at the MN Veterans Hospital in St. Cloud. Dave was well known for his scholarship and continued efforts to share the true history of the Dakota people. He was regularly called upon by schools, churches, historical societies, and universities to share his knowledge. A traditional dancer, he will be remembered by his powwow family. When he wasn’t dancing, his broad-cast journalism voice could be heard emceeing at powwows across Minnesota.

The family he leaves to cherish his laughter, humility and great smile include wife Valerie; son Scott; daughters: Teri (Brian), Becky (Nate), and Barbie; stepson Greg (Karla); 24 grandchildren; 7 great grandchildren; brothers: Bob (LaVeda), & Curt (Cathie); sister Lana; and many other relatives and cherished friends. He is preceded in death by many relatives and friends.