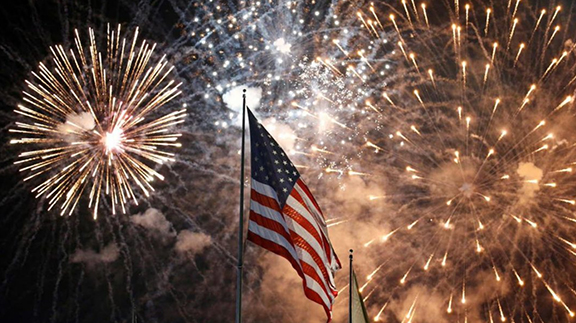 “There is no flag large enough to cover the shame of killing innocent people.”
– Howard Zinn

I’m not the best on dates, so that Fourth of July can really creep up on me. This year marks my granddaughter Animikiinz’s third birthday, born on the Fourth of July. She gives me a good reason to celebrate the fourth. She is just a bit older than the little girl who drowned with her father trying to reach this country; the land of the free, the home of the brave.

Medals of honor were awarded to soldiers who committed the massacre at Wounded Knee. That’s a sore point. The Remove the Stain bill in Congress seeks to strip the medals allotted to 20 soldiers after that fateful December 30 in l890. That bill begins to address the stain of American patriotism, and was introduced by Representatives Deb Haaland (Dem.) from N.M., and co-sponsor Paul Cook, of California.

Some things just don’t change
Manderson, the village upstream from the Creek, flooded seriously in the torrential storms. The flood contaminated that creek with sewage run off. The sewer and infrastructure needs for the village, let alone Pine Ridge, are pretty large; from broken water pipes, to pothole roads. Those should be paid for by treaty agreements with the Lakota, in a country which should keep agreements. Treaties are patriotic.

The Mni Wiconi water project, 5,000 miles of underground pipes intended to serve a 12,500-square-mile area that encompasses one-sixth of South Dakota is not complete, and water quality is not good on Pine Ridge, nor pretty much any reservation in South Dakota.

Ironically, the Lakota are looking down the barrel of a $8 billion pipeline which will make money for oil companies, and yet, they don’t have pipes for their village. It’s that basic.

Homecoming
In gigiiwe. I come home from the Dakotas, passing through till my safe spot, Becker County. That’s the county where Native incarceration and homicide rates are lower than the adjoining counties, Mahnomen and Beltrami. Opioids, however, prevail. On May l5, my tribe (White Earth Ojibwe) filed suit against Opioid manufacturers, noting that the epidemic rages and destroys our communities. According to testimony presented by Samuel Moose, the Fond du Lac Health Director at the Senate Hearings on the Opioid Epidemic in Indian country, “In my home state of Minnesota, the Department of Human Services reported that the age-adjusted death rate due to drug poisoning is four times higher among AI/ANs [American Indians/Alaskan Natives] compared to whites. Further, despite representing roughly 1.1% of the population for the state, AI/ANs accounted for 15.8% of those who entered treatment for opioid use disorder.”

The Indian Health Service delivered a lot of opioids to my community, way more than we actually needed. Those opioids were prescribed by the Federal government, under that American flag. That’s the same epidemic which brings the central American refugees to the shores by the droves – the War on Drugs.

And then I remember what it is to be a patriot. It turns out that I am a patriot to a land, not to a flag. That’s the basics of that. I love this land, she’s the only land I know. I love the water, the wild rice, and I love to live where the wild things are. I will defend it against all enemies, foreign and domestic. Omaa Akiing. The land to which the people belong. That’s my patriotism.

Three years ago, my patriotism was challenged when $38 million worth of MRAPs (Mine-Resistant Ambush Protected) and military equipment came towards us, injuring many Water Protectors. Water Protector Sophia Willensky should have received a Medal of Honor, instead she faced federal charges, despite her arm being shot by riot police. Water Protectors are some of the most patriotic people you will ever now. I’m going to stick with my patriotism.

Remember that Indigenous man and his daughter, drowning in front of us? He descended from people who were here long before that American Flag. He too loved this land.
Now, just to be clear on what patriotism means to me, I annually attend the PRCA Rodeo in Park Rapids. Not because I love to see that “old glory’ but because I love this land, and I love the people of this land. Most of the people at that rodeo live on this land and drink the same water that I do. I remain patriotic and hopeful.