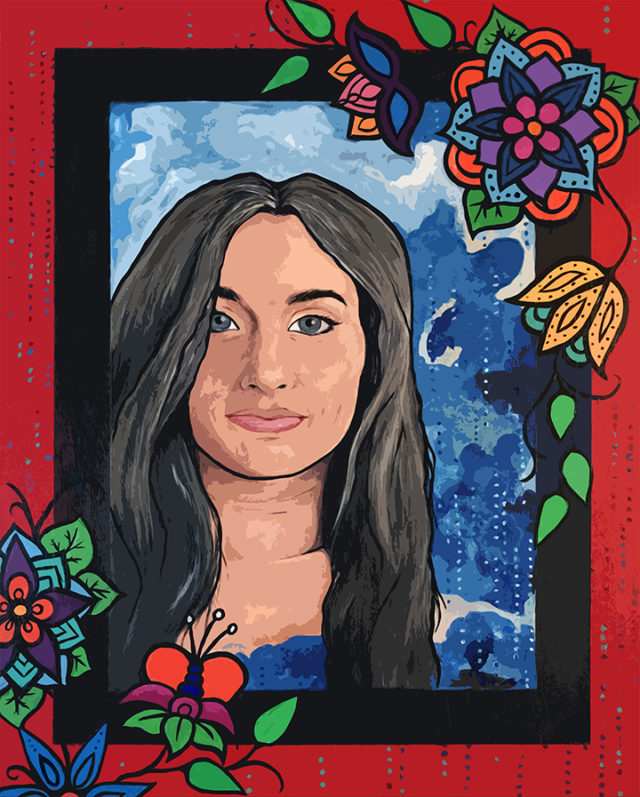 The exhibit “Bring Her Home: Stolen Daughters of Turtle Island” may be the most startling, energizing and troubling collection of art-work you ever see. Eighteen American Indian artists from across the U.S. participated in the show at the Minneapolis All My Relations Gallery that casts a bright light on the continuing epidemic of missing and murdered indigenous women.

The impact of this exhibit hits you in the gut and stays there, eliciting rage, awareness, and hope, while affirming the strength and beauty of Indian women. You may be a person who has never attended an art show, but if you are American Indian, chances are good that you know a woman who has been the target of violence. Go to this. The artists speak from the heart, and what they say will follow you long after your visit. 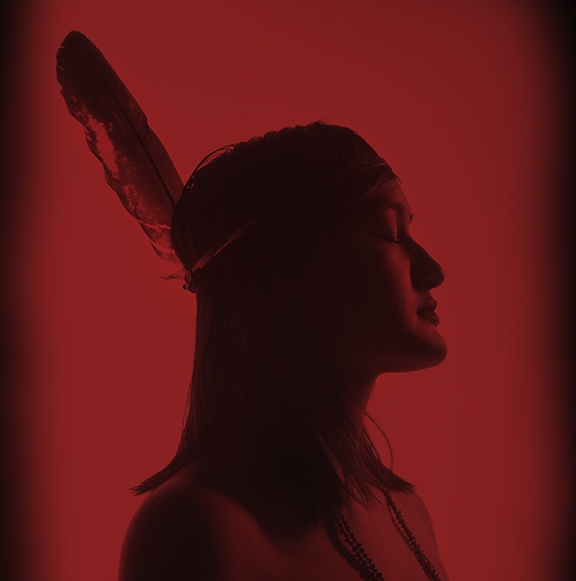 Curator Angela Two Stars (Sisseton Wahpeton Oyate) said the exhibit’s opening night in February proved to be emotional for many visitors. Two Stars has a personal connection to violence against Indian women: her grandmother disappeared and was found murdered when Two Stars was nine. The exhibit reminded Two Stars of her family’s desperate efforts to find her grandmother.

Two Stars said that “Bring Her Home” helps create conversations on the subject of missing and murdered Indian women, and it gives families a way to know they are not alone in their grief, they are not isolated, and that others know this heartache. Also, the exhibit is a reminder that if you are aware of violence against a woman, do not remain silent.

As you enter the exhibit, you’ll notice a large pedestal with a small wax image of a nude woman. The pedestal is surrounded by a circle heaped with strips of red cloth. A basket of cloth strips is at the exhibit entrance: visitors are encouraged to place a cloth strip in the circle in memory of a woman who was murdered. 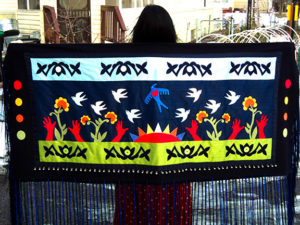 Other contributions to the exhibit also create a powerful punch. Lori Green’s mixed media mosaic shows a sun rising over Lake Superior as an Indian woman watches from trees close to the shoreline. The descriptive background for the piece states that Greene was raped at 16 and blindfolded. When she saw the lake and sun for the first time since being kidnapped, she knew she would survive. The mosaic is entitled “The Escape.”

An ink drawing by James Autio, Ojibwe from Wisconsin’s Lac Courte Orelles Reservation, shows a man outside in winter, walking along rail tracks. The picture illustrates the futility and heartbreak of family members searching for their missing relatives.

Most of the above may sound like a lot of victimization, but it’s not that. The message from this exhibit shouts that acceptance or indifference to violence is intolerable. It shouts that women are life forces: strong, beautiful, life-giving, brilliant. No human being anywhere should be the target for cruelty, violence to any degree, or death. The stories that leap from these works of art may bring tears, but don’t let the exhibit’s impact stop there. Often violence is shrouded in silence and it escalates. Stand up and say something about what you know. It could save a life.

“Bring Her Home” was organized by AMR Gallery in partnership with the Minnesota Indian Women’s Resource Center. The exhibit runs through April 20, 2018.