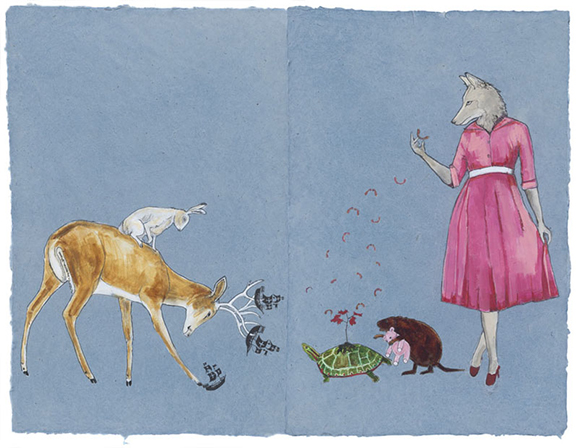 The thing about Julie Buffalohead’s newest exhibit of art at the Bockley Gallery is this. You can second guess her till the cows come home on what raccoon is doing in the water pail or why duck stands on one leg at the kitchen table under a fond (or suspicious) gaze of fox. It’s easy to overthink what may or may not be a detail.

But that’s the point. Buffalohead wants the viewer to interpret the images and meaning based on what is true to the viewer. No glossary of terms is offered. Instead, you the witness, perhaps aware of current events in the local world of art, pick up on the clever juxtaposition of images that whisper or shout and sometimes just tease. 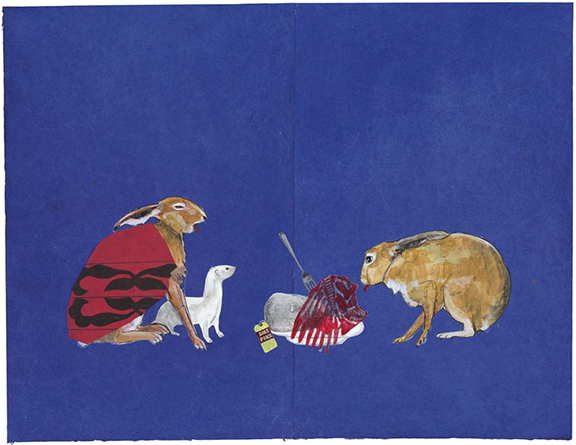 Buffalohead is an enrolled member of the Ponca Tribe of Oklahoma. She earned a B.A. from the Minneapolis College of Art and Design and a MFA from Cornell University. The St. Paul artist is well known for her whimsical use of trickster coyotes and rabbits, and of deer. These days she’s just as likely to clobber you over the head with an interpretation of the very controversial “Scaffold” sculpture that was removed from the Sculpture Garden of the Walker Art Center in July. Some Dakota strongly objected to a gallows sculpture by artist Sam Durant which served as a painful reminder of the December, 1862 hanging of 38 Dakota men who fought in the U.S.-Dakota War.

In an interview, Buffalohead said that if the Walker had consulted with the Dakota before agreeing to show Durant’s sculpture, many people would have been spared pain. She addresses the sculpture in “Garden,” which shows some Walker iconic images as well as a woman contemplating a cherry on a spoon near a noosed rabbit and a coyote with eyes downcast holding a rooster.

I know what some of you are thinking. What is that about? Buffalohead’s work pulls you in and makes you think. Like the best of any art, you leave the room slightly changed and a little on edge. 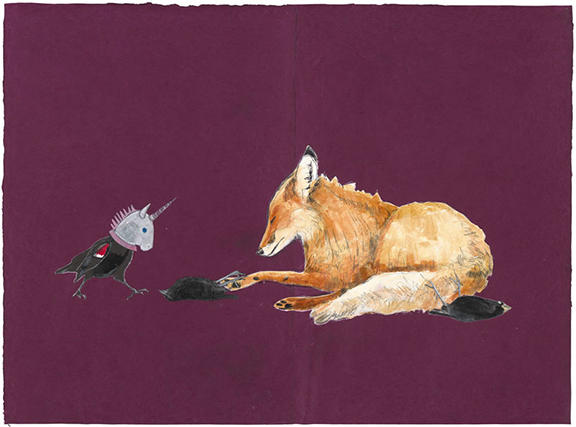 One of my favorite works shows a deer enclosed in a white picket pen with a pesticide sign on the lower right, garden clippers on the left, and ravens flying away. The only small greenery is inside the pen. Another favorite: coyote on a lawn chair wearing a dress and appearing indifferent. Otter has an eye on coyote, the owls appear distracted by something off picture, and a toy boat rests against the water pail.

What does it mean? Whatever you want to take away.

To see the interview in this issue with Julie Buffalohead, see: https://thecirclenews.org/the-arts/interview-with-artist-julie-buffalohead/

Venture into the Kenwood neighborhood for this exhibit if you can. The “Julie Buffalohead” Exhibition is on display through Dec. 23 at Bockley Gallery, 2123 W. 21st Street, Minneapolis. www.bockleygallery.com.