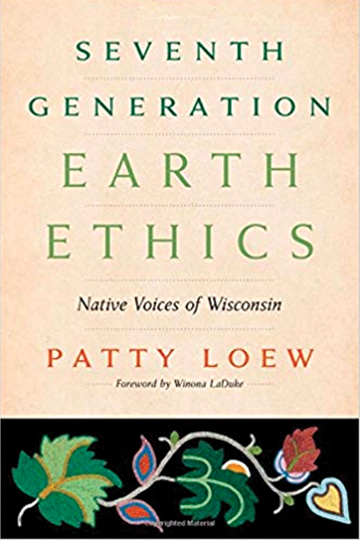 In “Seventh Generation Earth Ethics” Loew profiles thirteen indigenous environmental protectors who have spent their lives gathering and passing on Earth knowledge and taking activist stands against corporate exploitation of the land.

Bad River elder, Joe Rose has spent a lifetime of teaching and activism against corporate mining and toxic dumping around reservations in Wisconsin. Educated at the St. Mary’s Catholic school at Bad River, Rose struggled to undo the constraints of Catholicism. But the schooling Rose treasures most came outside of the classroom. His grandfather invested a great deal of time teaching Rose the Ojibwe language, how to participate in ceremonies and practice culture. Netting fish on Lake Superior, duck hunting and wild ricing drew Rose into a deeper appreciation of the natural world. It wasn’t long before Rose began to understand how fragile and vulnerable the land was to non-Natives looking to rape the Earth of her natural resources.

From standing in support of spear fishing in ceded Indian territory of the 1980s to the recent end of the proposed Penokee Hills’ mine, which would have destroyed the Bad River sloughs, Rose has been in the forefront of environmental protection of Indian lands.
Loew has spent a career as a broadcast journalist and educator. Through the years she has documented the history of the eleven tribes in Wisconsin. And she has developed intimate relationships with elders, environmental protectors and community leaders. Her relationships have given her access to what is known as “hidden transcripts.” While non-Native researchers expect to walk into a tribal community and pass out surveys, Loew has known that Native research beings with relationship. And all of this is built on trust.

At the turn of the century Indians were dying at rates higher than white people. When Tuberculosis (TB) ravaged the country, Indians died more than five times the rate of their white counterparts. The lack of roads meant little access to hospitals and country doctors. TB sanatoriums were out of the questions for most Indians. And this is where the Thunder women’s medicine came in.

“For other respiratory illnesses such as bronchitis and asthma, Jenny and Mary Thunder would have collected the inner bark from certain trees and infused them in tea for their patients. They would have used the resin to create liniments for rheumatism and other inflammations and the gum from plant blisters to treat insect bites and open sores and in plasters for burns,” writes Loew.

As white settlement grew, woods were replaced by farms. It was difficult to gather medicines and in fact, some farmers destroyed some vital plants purposefully just to keep the Indians away. Today, many of these medicinal plants are difficult to find and this includes wild berries.

Frances Van Zile was born in the living room of her parents in 1952 on the Mole Lake Ojibwe Reservation. Those were tough times for Indians back then. Frances’ father worked at a saw mill and made a living hunting and fishing to provide for his family. Because Ojibwe harvesting rights that were a part of treaties made with the U.S. government were not honored, getting harassed and/or arrested by game wardens was common for Indians trying to carve out a subsistence living.

Van Zile eventually left the poverty stricken reservation of Mole Lake and relocated to Chicago. The American Indian Center became not only a home away from home, but also a place of discourse with other Indians. As the Red Power movement rolled on, Van Zile began to understand the importance of political and cultural activism. When she returned to the reservation it was not long before the Exxon corporation announced plans to mine one of the world’s richest copper and zinc deposits near the reservation. With the opposition of Van Zile and tribes and statewide environmental organizations pressure led to Exxon abandoning its mine plans.

Loew notes that Van Zile believes it was the tobacco offerings, pipe ceremonies and sweat lodges conducted during the mine fight that gave the Mole Lake people the spiritual strength they needed to stop Exxon.

“Seventh Generation Earth Ethics” is an extremely relevant book in this era of environmental concerns by non-Natives. The worldwide protest of thousands at the Standing Rock Sioux Reservation against an oil pipeline revealed that throughout the Earth people are concerned about corporate land raping, all backed by Donald Trump. For any and all people upset about this kind of exploitation, Loew’s book is an encouragement in the war to save the planet.

In her forward to “Seventh Generation Earth Ethics,” famed White Earth Ojibwe activist, Winona LaDuke echoes this global call to protect Mother Earth. “The land calls us. It calls us home. And it makes us the people our ancestors wish us to be.”