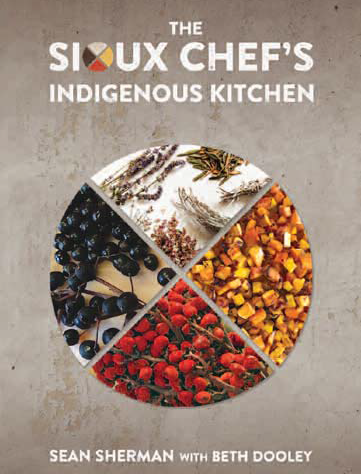 So you think fry bread is a long standing traditional American Indian cuisine? Nope. Sean Sherman, an Oglala Lakota chef with a mission to show people how to use and enjoy truly traditional food, asked his mom if she grew up with fry bread. Sean was raised on the Pine Ridge Reservation in South Dakota.

Sean’s mother told him that she remembered fry bread consumption starting in the 1960s. It became common in American Indian households as a way to use the federal government commodity food that included shortening and flour.

“If fry bread started in the 60s, it doesn’t go back that far,” he said in a phone inter-view. “There’s no reason that fry bread should be the go-to staple for every tribe in North America. It tastes good and people have had to survive off it, but it’s not healthy. We should be at a point now where we break that mold and bring better food to the table.”

Sean has just published a cook book entitled “The Sioux Chef’s Indigenous Kitchen” which will be available for sale in October. Much of that better and genuinely traditional food is highlighted in the cookbook recipes. For those readers who grew up on Minnesota reservations and ate lots of rabbit and venison, the book is a treasure trove.

Its recipes include ingredients that were a mainstay of Natives who lived here hundreds of years ago. Some of those ingredients are a challenge to find, such as sumac, juniper berries or rabbit. Sean offers some substitutions in the recipes, but the point this chef makes is simple. Go with your instinct. Taste as you go, trust your judgment, and know that the recipes were writ-ten more as an outline than a rule book.

“Clean food from your own region is so good for your body,” he said, adding that if he could change the world in one swoop, he would make everyone fully aware of plants as food and medicine, and how they were used by Native ancestors to maintain health.

Much of that knowledge has been lost, and that is the challenge before Sean and the growing number of Native chefs who work to return yesteryear’s food to a 21st Century table. Sean cooks with fresh ingredients from a local co-op and uses a lot of seasonal ingredients. Missing from his table are European staples like wheat flour, dairy products, sugar, and domestic pork and beef. The recipes usually contain only four or five ingredients; the two I chose to make took little time and were delicious.

If you buy this book, give attention to the introduction where you will learn about Sean’s journey from a reservation boyhood to his 27-year career as a chef, caterer and food educator in Minnesota, South Dakota and Montana. As a child, Sean attended powwows, Sun Dances, family gatherings and school events interspersed with hunting game birds, mending fences, and riding in the open back of pickup trucks. The writing is so vivid and compelling that you will wish the introduction was 100 pages longer.

Then make a grocery list and make a few calls to find the sumac or chokecherries. You may find the cedar sprigs in your own back yard. By dinner time you’ll be eating a traditional meal not unlike those consumed by your great-great-great-grandparents.

Sean and co-author Beth Dooley will appear at a book signing from 6-9 p.m. on Oct. 18 at the Aster Café River Room, 125 S.E. Main Street, Minneapolis. Samples made from recipes in the cookbook will be served. Books will be available for purchase.

Additionally, Sean will give 30-minute cooking demonstrations from 12:30 to 2:30 p.m. on Oct. 21 at the Mill City Museum. The museum is located at 704 S. 2nd St., Minneapolis. The cost to attend is included in your museum ticket ($12 adults, $10 seniors, veterans/active military, college students, $6 ages 5-17, free for those age 4 and under and for Minnesota Historical Society members.)

It’s not enough that the ingredients from Sherman’s new cookbook create delicious, memorable food. They also introduce remarkable aromas to the kitchen that last like a natural air freshener for at least a day.

That delightful fact became apparent with the use of freshly chopped sage which brought a delicate flavor to both the bean cakes and the wild rice pilaf. Until now, the only sage I’ve cooked with was dried and from a jar. Fresh sage is far superior. For both recipes, the shallot added a milder flavor than the yellow onions I usually use, and the smoked salt added an unexpected pop.

When shopping for the bean cake recipe, I couldn’t find juniper, sumac or corn flour and used regular flour (sorry, Sean) and extra shallot and sage. Apparently corn flour is displayed in Hispanic food sections of the grocery store, not in the baking aisles. In a phone interview and in his book, Sean said that recipes are more like outlines waiting to become your own creation. If you don’t have an ingredient, substitute it for an ingredient that is closely related in flavor and texture. Or don’t. Do something completely different. This chef advocates for an adventurous spirit when you step into the kitchen.

When making the bean cakes, do not follow my example and use a blender to mix the dough unless you want to work with a sad, sloppy mess. Use a food processor, as Sean says. (And corn flour might work better as well!) I transferred the sticky mass to a mixing bowl and used a pastry cutter to successfully blend the dough. Also, I used the egg in only half of the dough. The eggless half turned out crispier.

For the wild rice pilaf, try to use wild rice harvested and finished on one of Minnesota’s northern wild rice lakes. It is far better than the mass produced variety from the grocery store. You’ll find information online for Native wild rice producers from all or most of the state’s reservations. The wild rice I used from the Fond du Lac Reservation cooked up fluffy, flavorful and with just the right texture.

In preparing the recipe, I used eight ounces of baby bella mushrooms, and eight ounces of shitake mushrooms. The instructions didn’t require that the mushrooms be chopped, but I cut the largest ones into chunks. The vegetable stock evaporated and/or soaked into the rice almost immediately. I used pine nuts in lieu of chest-nuts. The recipe was easy to prepare, and the results were spectacular.

Serve these as a first course on wild greens, or make them into tiny patties for finger food. They make wonderful appetizers and snacks.

Preheat the oven to 250°F. In a food processor fitted with a steel blade, pulse together all of the ingredients to make a rough dough. Using moistened hands, form the mixture into patties about ½ inch thick. Dust the patties with the flour and set aside.

Film a skillet with the oil, and set over medium heat. Working in batches, fry the patties until golden brown on each side, about 5 to 7 minutes per side. Transfer to a baking sheet and put in the oven to keep warm.
(From “The Sioux Chef’s Indigenous Kitchen” by Sean Shermann with Beth Dooley.)

Wild rice is a flavorful and remarkably satisfying food. The mushrooms add a dark, meaty flavor and texture, while the chestnuts are creamy (and high in protein). This meatless dish will appeal to omnivore and vegetarian alike. Cooked wild rice will keep several weeks in the refrigerator and for at least a year when frozen in a plastic freezer bag.
In a large skillet, heat the oil over medium-high heat and add the mushrooms, sage, and onion. Cook, stirring, until the mushrooms are nicely browned and the onion is soft, about 5 minutes. Stir in the stock, wild rice, and cranberries and cook until the liquid is nearly evaporated. Stir in the roasted chestnuts. Season with maple syrup and smoked salt to taste.

*To roast and peel chestnuts, use the sharp point of a small knife to score an X on the flat side of the chestnut and place on a baking sheet. Roast in a 350°F oven until the skins begin to peel back. The length of roasting time will depend on the freshness and size of the chestnuts and range from about 10 to 25 minutes. Remove, and when cool enough to handle, peel.

(From “The Sioux Chef’s Indigenous Kitchen” by Sean Shermann with Beth Dooley.)