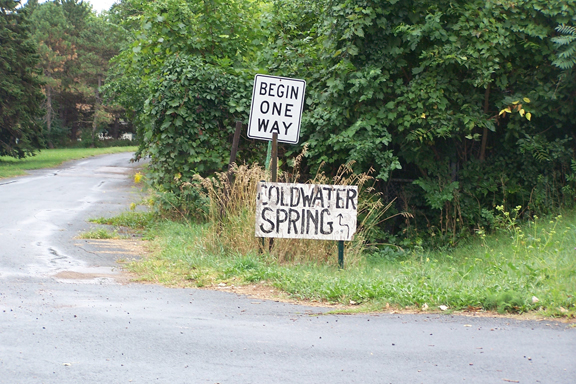 Coldwater Spring, an important spiritual, cultural, and historical place to many Dakota, continues to be the site of controversy surrounding Indigenous treaty rights, federal land management, and the assertion and acknowledgment of the strong Native American presence in the region.

On August 30, 2012, the park service issued the Superintendent’s Compendium, which functions as "the summary of park specific rules." Among other things, the Compendium "provides a list of activities requiring either a special use permit or reservation, and elaborates on public use and resource protection regulations pertaining specifically to the administration of the park."

According to the Compendium, conducting a ceremony requires a permit from the superintendent. People found in violation of the Compendium’s regulations can be fined up to $5,000 and imprisoned for up to six months. Additionally, the Park Service is not issuing any permits until Spring of 2013.

Many people in the Dakota Native community are upset about the restrictions and fines that have been place upon gaining access to the spring, which is located near the intersection of the Mississippi and Minnesota rivers northwest of Fort Snelling in an area the Dakota call Mdote or Bdote (The Joining of the Waters).

According to a speech given by Shakopee elder and spiritual leader Reverend Gary Cavender in 1999, "in our Creation myth we the Dakota, the Seven Fires of the Dakota, came from the belt of Orion… and arrived at the convolution of the Minnesota and Mississippi Rivers, so in some respects it is our Eden."

Cavender also explains that Coldwater Spring is believed to be the home of Unktehi, the God of the Waters. Because of the sacredness of the site, many Dakota visit the spring to offer prayers, hold ceremonies, and collect water.

"For those of us who value the site today, I think it’s about reconnecting and reestablishing a spiritual relationship with these beings and with our homeland," said Waziyatawin, Dakota activist, published author, and the Indigenous Peoples Research Chair in the Indigenous Governance Program at the University of Victoria in British Columbia.

In addition to the spiritual importance of the area, the site holds historical significance in establishing government-to-government relationships between the U.S. and Dakota tribes. In 1805, two out of seven Dakota tribal leaders signed a treaty ceding 100,000 acres of land to the federal government in what is now the northern half of Minnesota. Article 3 of this treaty states that "The United States promise on their part to permit the Sioux to pass, repass, hunt or make other uses of the said districts, as they have formerly done, without any other exception."

"For us, it’s not just a matter of religious rights and access to sacred sites, but it’s encompassed in land that was ceded in the 1805 treaty and that treaty should still be in effect," said Waziyatawin. "Even though that site is encompassed within those treaty parameters, we continue to be denied access."

Officials from the National Park Service (NPS), which currently manages the area, said that each group that uses the property must be considered equally and that they can’t acknowledge Native American rights specifically.

"Anything we do for one group, we would have to do for every group," said John Anfinson, Chief of Resource Management for the Mississippi National River and Recreation Area (MNRRA) branch of NPS. "One of the guides we get in the National Park Service is be careful of setting precedents that you’re going to set for everyone."

Bruce White, an anthropologist, historian and co-author of "Mni Sota Makoce: The Land of the Dakota" has conducted research on Fort Snelling, Native American history in Minnesota, and treaty rights issues since the early 1990s. He says that this view is emblematic of NPS’s approach to managing the site.

"There are certain treaty rights that specify Dakota interest in anything within the Fort Snelling area," he said. "That was mentioned in the information that I provided to the Park Service, but they said that it was speculative, that they had no interest in considering it, and that we’d have to bring a lawsuit."

The Coldwater Spring area has a long history of oversight by a variety of federal entities. From 1820 until the 1920s, the property was managed by the U.S. Army, which used the water from the spring to supply Fort Snelling and military camps in the region. In 1951, the Bureau of Mines took over, building several facilities near Coldwater Spring and conducting research on the property until the Bureau itself was shut down in 1996. For the next 14 years, the Coldwater Spring area was managed by the U.S. Fish and Wildlife Service, although they did not actively use or maintain the property.

In 2004, the Department of the Interior began the process of determining the future of the area. This process included deciding whether to develop or restore the land and choosing an entity to manage the site.

"This was a good opportunity for the federal government, for the state of Minnesota, to begin a new relationship with Dakota people," said Waziyatawin. "This would have been an opportunity for an act of reparative justice in which the land was cleaned up and returned to Dakota people."

According to Paul Labovitz, Superintendent of the MNRRA branch of NPS, four federally recognized tribes came forward requesting to manage the site, but were turned away for not consolidating their interests as a single entity.

"There was not a consensus amongst multiple tribes and everyone seemed okay with the National Park Service managing the site," said Labovitz.

However, Waziyatawin says that this was a ploy to deny tribes the ability to manage the site. "They had multiple offers from Indigenous communities but turned them away under the guise that they weren’t in agreement and they didn’t know which was authentic under the context," she said.  "Any Dakota community would be better than the Park Service."

Despite the interest of tribes, official management of the site was conferred to NPS in 2010. At this time, they began a $2.2 million restoration project in the area, demolishing most of the old mining buildings and leveling 13 acres of trees, replacing them with native plants that will one day comprise a prairie. Park officials assert that they have helped Dakota people gain access to the site throughout the restoration process.

"There wasn’t anybody who showed up that we couldn’t figure out a way to get them where they needed to be," said Labovitz.

However, Waziyatawin visited the area in August of 2012 with a group of Dakota youth and the contractor on site denied them access to the spring to collect water and offer prayers.

"He didn’t even acknowledge that as Dakota people, we should have access to that site all the time," said Waziyatawin.

Although not officially stated in the Compendium, park officials said that groups of 25 people or less do not need a permit to carry out a ceremony in the park between the hours of 6am and 10pm.

"We’ve looked at compendiums around the country to see what other parks require, and in some cases they’ll say a first amendment activity of 25 or less doesn’t need a permit, and that’s kind of where we’ve gone to," said Anfinson.

Since this specification is not listed in compendium, White can foresee issues with how the policies are implemented.

Park officials say they will continue to review and revise the Compendium in months to come, but will not seek out Dakota input on the issue deliberately.

Because of  her experiences trying to negotiate and communicate with federal organizations on the Coldwater Spring issue, Waziyatawin does not believe that positive results for Dakota people will come through government channels.

"I think what this whole process has shown is the futility of trying to work within the system," she said. "We’ve realized over and over again that when it comes to dealing with government entities, we don’t have any rights."

White feels that the Coldwater Spring issue highlights the necessity for all Minnesotans to have respect for the traditions and rights of Indigenous people.

"Minnesota’s a Dakota place, and within Minnesota, we’re surrounded by individual places that have incredible importance," he said. "As non-Native Minnesotans, people have an obligation to respect the people who were here before and their traditions and understanding of the place."