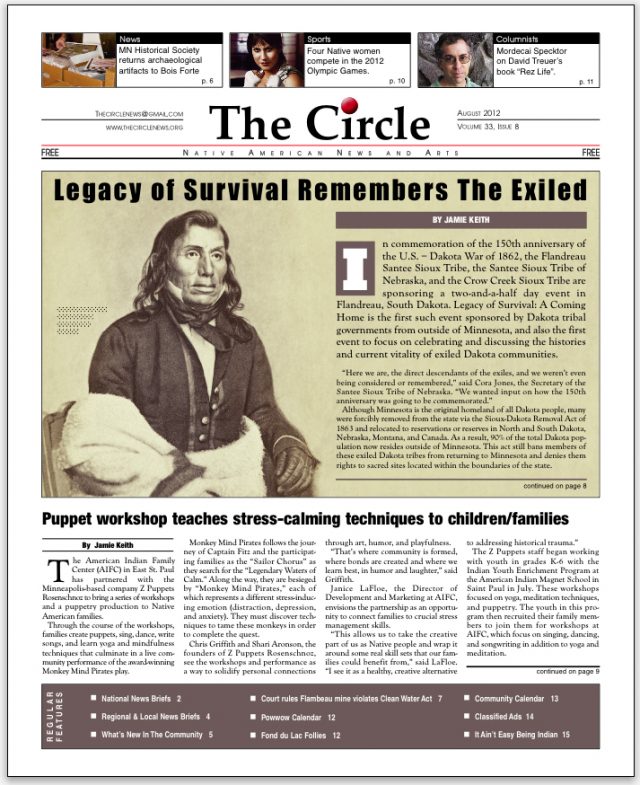 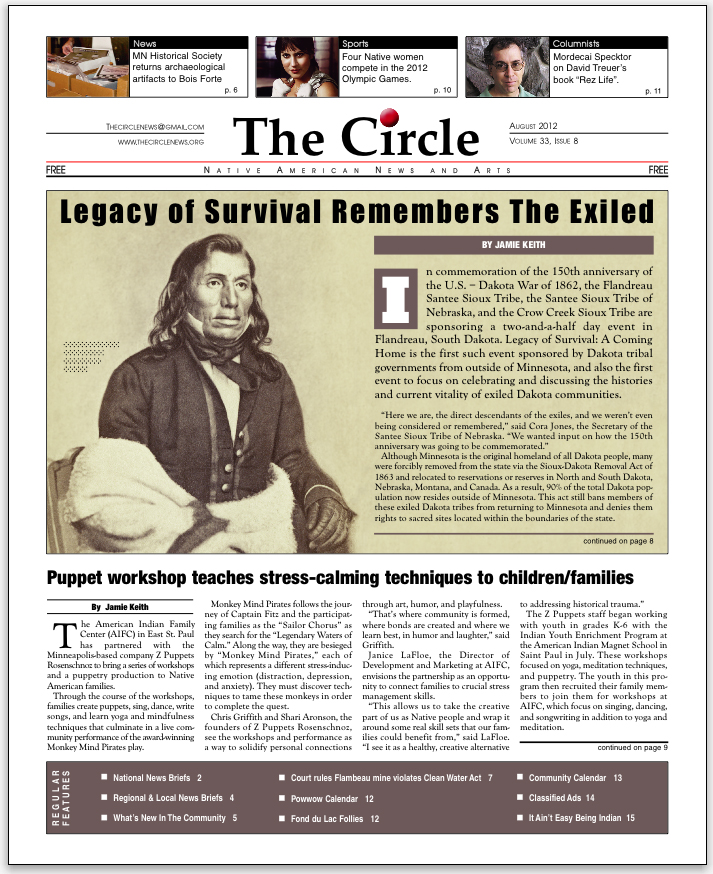 In commemoration of the 150th anniversary of the U.S. – Dakota War of 1862, the Flandreau Santee Sioux Tribe, the Santee Sioux Tribe of Nebraska, and the Crow Creek Sioux Tribe are sponsoring a two-and-a-half day event in Flandreau, South Dakota. Legacy of Survival: A Coming Home is the first such event sponsored by Dakota tribal governments from outside of Minnesota, and also the first event to focus on celebrating and discussing the histories and current vitality of exiled Dakota communities.

"Here we are, the direct descendants of the exiles, and we weren’t even being considered or remembered," said Cora Jones, the Secretary of the Santee Sioux Tribe of Nebraska. "We wanted input on how the 150th anniversary was going to be commemorated."

Although Minnesota is the original homeland of all Dakota people, many were forcibly removed from the state via the Sioux-Dakota Removal Act of 1863 and relocated to reservations or reserves in North and South Dakota, Nebraska, Montana, and Canada. As a result, 90% of the total Dakota population now resides outside of Minnesota. This act still bans members of these exiled Dakota tribes from returning to Minnesota and denies them rights to sacred sites located within the boundaries of the state.

One of the main goals of the event is to make the general population aware that this act is still on the books and currently impacting tribes. Although the call to amend the act is largely symbolic and would not result in any land or money being transferred to exiled tribes, it would open the door to more tribes being involved with cultural preservation and resource management in Minnesota.

"This is the first step in meaningful government to government consultation and relationship-building with regards to sacred sites," said Franky Jackson (Sisseton Wapton Dakota Oyate), Cultural Research Consultant and one of the main organizers of the event. "Until that is addressed, a lot of the tribes who currently reside out of Minnesota will never really feel that true reconciliation has taken place."

Another byproduct of the exile of Dakota people from Minnesota is that many of the tribes have lost contact with one another.

"The goal here is to reintroduce ourselves so we know our history and our journey," said Melvin Houston, spokesperson for Minnesota affairs for the Santee Sioux Nation of Nebraska and another key organizer of the event. 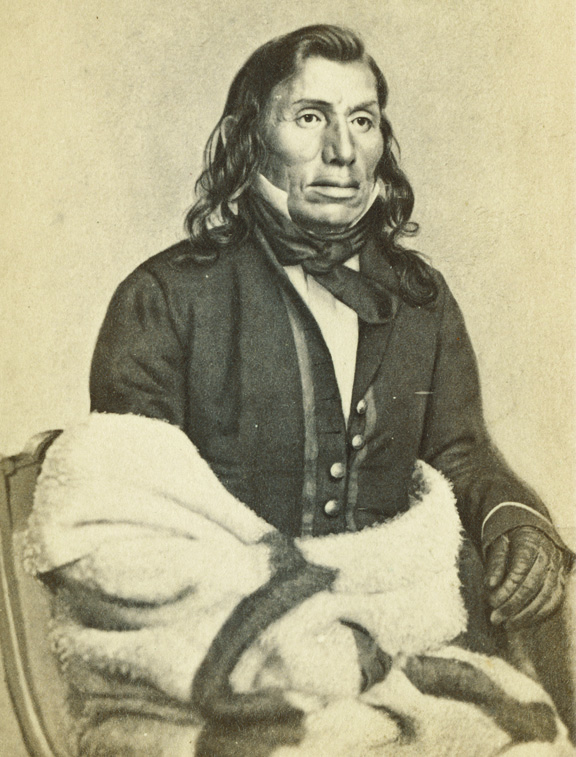 While many events held in honor of the U.S.-Dakota War of 1862 have highlighted the history leading up to and directly following the war, very few have focused on more recent history and contemporary Dakota life.

"Within the community and within the non-Indian community it’s easy to fixate on 1862 specifically and focus in on that date almost singularly," said Sasha Houston Brown (Santee Sioux Tribe of Nebraska), American Indian Advisor at Minneapolis Community Technical College. "We look back at all of the darkness, but we should also be looking at our own stories of survival and celebrating that."

The event will begin the evening of August 15, with a welcoming feast and Dakota film screening. On August 16, there will be a variety of presenters, speakers, performances, and youth activities. Special highlights include Dakota language activities, a genealogy workshop, a youth art, poetry, and spoken word workshop, lacrosse and archery clinics, and a musical performance by local artist Jackie Bird. Dakota activist, author, poet, and musician John Trudell will speak about contemporary issues impacting the tribes. On August 17, the attendants will walk and relay from Flandreau to the Pipestone Quarry, a sacred Dakota site in the southwestern corner of Minnesota. There, a group of elderly women will bring the Southern Council fire across the Minnesota border, symbolizing the return of the exiled Dakota people to Minnesota.

"For those people who are in tune with traditional cultural ways, that is a symbolic gesture of the Dakota returning home," said Jackson.

Many of these organizers and other supporters of the event feel that it has special significance for both Native and non-Native residents of Minnesota.

"Most Minnesotans have no idea about what happened here and what Minnesota was prior to colonization, statehood, and removal," said Brown.

She feels the information presented by the event has the potential to spark dialog and education in the urban Dakota communities of the Twin Cities.

"I really hope we continue to talk about this so our urban Dakota youth have the opportunity to learn about their own heritage and their own tribal legacies in this region," said Brown.

Jackson echoes this sentiment and recognizes the event as an opportunity to unify all Dakota people and educate the public at large about the past and current cultures of Native people in the region.

"I think this event will spark awareness for history and bring everyone together in a good way so we can start a healing process that will reach outside of the state lines and  speak to all Dakota, wherever they’re residing," he said.

For more information about the event, contact J.B. Weston by phone at the Flandreau Santee Sioux Tribe Historical Preservation Office at 605-997-3891 or visit: 1862legacy.weebly.com/index.html.