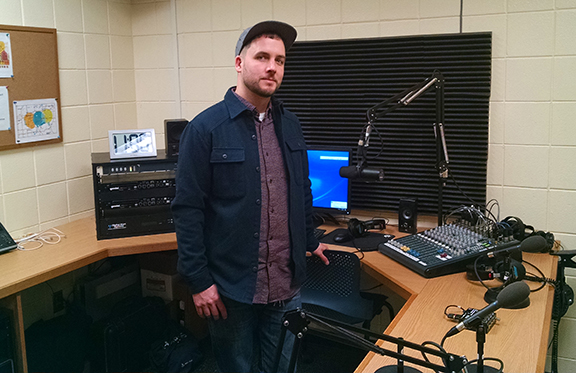 A low-powered FM radio station seven years in the making has taken to the air in south Minneapolis.

While small in size compared with clear channel radio, it is bringing Native Americans and other ethnic group news, information and cultural entertainment to a potential market of 300,000 listeners.

Brendan Kelly, KRSM station manager, said the station works with leaders and volunteers within the Phillips Neighborhood to design programming for groups that are mostly ignored by mainstream media.

The nonprofit Pillsbury United Communities that has worked to support underserved populations in Minneapolis for the past 138 years launched station planning in 2010 through its Southside Media Project.

Leaders from the Waite House office, Main Street Project, Hope Community and the Little Earth of United Tribes were among the early planners. Along the way, Kelly said, the Southside Media Project also interacted with the Minneapolis American Indian Center, Native American Community Development Institute (NACDI) and groups along Franklin Avenue that encourage economic development and investment in the community.
Ownership of the broadcasting license is held by PUC, NACDI, Hope Community and Voice for Racial Justice.

Programming is aimed at serving the diverse communities of south Minneapolis, he said, and programming for Native Americans was included right from the start.

For instance, on Tuesdays from 11 a.m. to noon the station broadcasts The Eagle, which contains Ojibwe language, culture and history information provided by the Leech Lake Band of Ojibwe’s station KOJB at Cass Lake. That program is rebroadcast on Saturdays from noon to 1 p.m.

The Minneapolis station picks up the national call in radio show Native America Calling on Tuesdays, Thursdays and Fridays from noon to 1 p.m. And on Thursdays from 11 a.m. to noon it broadcasts American Indian Living, with Dr. David DeRose, focusing on health and wellness issues in Indian Country.

Both those programs are syndicated by Anchorage, Alaska-based Native Voices One (NV1) that has 175 affiliate stations across states with sizeable Native populations and with reservation-owned stations.

Again linked with NV1, KRSM broadcasts a weekly compilation of national Native news, cultural and sports news and commentary called Native Voices One from 1 to 2 p.m. on Fridays.

Under development is a local Indian health and wellness program with Dr. Deatrick LaPointe, the “Take-Care Show,” and a show with Ashley Fairbanks called “115 Blocks” that will be a roundup of organizational and current event news. That name comes from Minneapolis being 53 blocks long to the north and 62 blocks long to the south.

A local, Native foods program is being planned with Chef Austin Bartold (Lac Courte Oreilles), manager at Gatherings Café in the Minneapolis American Indian Center, Kelly added. Additional local programming with relevant news and information for the Native American community in the Twin Cities will likely come from “partner” community radio stations in the metro area.

Low Power FM stations (LPFM) stations across the country had a rough start despite strong community support. Several bills regulating how the Federal Communications Commission (FCC) could grant licenses were passed by Congress after the initial act became law in 2000.

Pillsbury United Communities’ community media project worked with several communities across the Twin Cities, including the Waite House groups in the Phillips Neighborhood, to get three such stations started in the metro area.

WFNU (94.1 FM) broadcasts from the Frogtown Neighborhood in St. Paul. It is believed to be the most ethnically diverse community in the metro area. That station is partly owned by a Hmong arts group.

The Dayton’s Bluff Community Council owns and operates the new WEQY-FM, 104.7, on St. Paul’s East Side.

All three metro radio stations encourage volunteers to work in all phases of operations. Kelly said this is partly because of the community nature of the stations and also because the supportive groups want volunteers to learn radio operations, develop talents and become more civically engaged in their neighborhoods.

Kelly started work as a community volunteer planning for KRSM from the beginning. He was later hired when it became evident planning needed full time attention. That also put him in close working relations with Francisco Segovia, director of PUC programs at Waite House until his retirement in December.

Meghan Muffett, community relations director for Pillsbury United Communities-Waite House, said Segovia is a living example of who community nonprofit radio is designed to serve. A native of El Salvador who has held several major city and community positions in Minneapolis, Segovia spoke of people “connecting through the waves.”

One of Segovia’s comments, Muffett said, was, “Through the waves you are home, even though you are on the other side of the world.”

Given the ethnic diversity of the Phillips Neighborhood, such connections can be especially important.

Muffett said demographic research on the neighborhood populations PUC-Waite House served in 2016 found that 46 percent were of Hispanic/Chicano/Latino background, 23 percent were lumped as “African / Black / African-American,” 14 percent were American Indian and Alaska Native, 10 percent were white, 6 percent were “other”, and 2 percent were listed as Asian, Native Hawaiian or other Pacific islanders.

None of these groups command much attention from mainstream broadcast stations, Kelly said. After KRSM went on the air, he drove all around south Minneapolis and into the northern reaches of the city to check radio reception far from Phillips Neighborhood.
“I was surprised,” he said. “It reached farther than what the FCC predicted would likely be the range.”

More information on KRSM FM and its program schedule is available at www.krsmradio.org/ourshows.

Information about Pillsbury United Communities, which is one of the oldest continuing community service organizations in the nation, is available at
www.pillsburyunited.org;

and a list of PUC programs at Waite House in the Phillips Neighborhood is available online at www.puc-mn.org/waite-house.