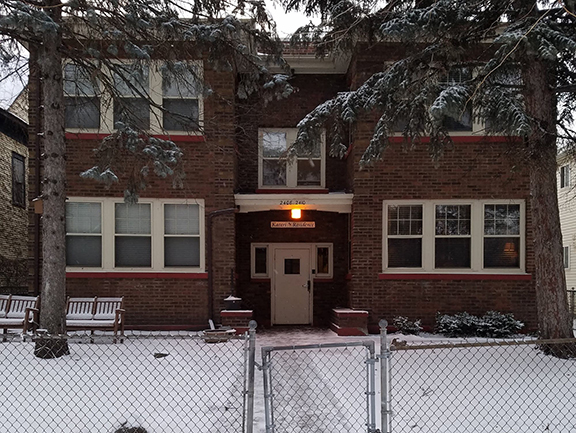 The Minnesota Indian Women’s Resource Center (MIWRC) is scrambling to raise funds to either take over the Kateri Residence in the Phillips Neighborhood of Minneapolis or move the Kateri program to a new site that MIWRC would operate.

Since 1972, Kateri has helped Native American women recover from addictions –and their children – with transitional housing, counselling and therapy, and bringing mothers and their children back together as a family unit. It also helps women reenter the work force and find housing after leaving the program’s apartment building at 2408 4th Avenue South.

St. Stephen’s Human Services, a social ministry arm of the Church of St. Stephen, 2211 Clinton Ave. S, Minneapolis, announced in early December that it would not be accepting new residents at Kateri and would close the house at the end of the current fiscal year in June, 2018.

There were 12 women and four children housed at Kateri Residence at the end of December, a staff member said.

Major repairs are needed to reroof and upgrade the apartment building. And St. Stephen’s Human Services has been losing money annually for several years as it continued its support of the halfway house and counselling services for Native women and families.

Kateri and St. Stephen’s Human Services are not Native or tribal entities despite its 45-year-history of serving Native people, said Patina Park, executive director of MIWRC.

As a result, they do not have access to programs, government funding and tribal connections that the Women’s Resource Center programs have. That is why MIWRC is exploring how it might take over the program.

“This is too important. This is more than a service for Indian women and families. These are our people,” Park said.

What’s more, St. Steven’s Human Services is primarily involved with homelessness issues in and around Minneapolis. That work will continue. It is telling people through its website that families in need of shelter should contact the Hennepin County Family Shelter Team (612-348-9410) and for similar assistance to contact the St. Stephen’s street outreach, emergency shelter and housing programs at www.ststephensmpls.org/need-help.

Park said St. Stephen’s Human Services, a nonprofit founded by the Whittier Neighborhood Catholic church, has indicated it will decide what to do with the property in four to six weeks. “We will probably know by mid-February what they will do and what we need to do,” she said.

About $411,000 would be needed for a roof and repairs, she said. Then, additional support for programs will be necessary. As a result, St. Stephen could convey the property to MIWRC or sell it to developers. If it goes the latter route, Park said MIWRC would try to absorb the Kateri program and operate it from a yet-unknown site.

Additional financial support will be needed to offset the operating losses that the Minneapolis church group has been experiencing, she said. Given MIWRC’s ties to tribes and programs, however, Park said she is optimistic that proper funding will be found.

St. Stephen’s explains its work with Kateri and housing as an outgrowth of work in the 1960s when members of the Minneapolis church began programs for the poor and homeless initially staffed by parish volunteers. Later, a national recession and cuts in federal funding to local governments in the 1980s, and the “deinstitutionalization of mental health facilities without providing alternatives,” caused problems with housing and related services to escalate, the church said.

Kateri Residence was just one response by church groups and non-profit organizations dealing with broader problems of housing, alcohol and drug additions, and getting families reunited. But it is especially unique in that it focused on helping Native American women and their children.

Among its programs, it provides housing for Native Women while offering recovery support, case management and advocacy, healthcare with on-site nurse, parenting classes, family reunification assistance, life skills that include getting GED education completion and financial management support, help in securing housing and employment, and all of this is done with sensitivity or Native culture. The latter include morning meditation with smudging and burning of sage, talking circles, community feasts, exploring spirituality, mentor ship by elders and alumni, and access to ceremonies and powwows.

Other drug and alcohol addictions are deeply entrenched in Indian communities and oftentimes addicted people will move from reservation communities to the Twin Cities. For some of those reasons, Park said, MIWRC and the Fond du Lac Band of Lake Superior Chippewa are partners in a sobriety and training program in Minneapolis that is compatible with Kateri objectives.

That work closely tracks with Kateri and is focused on educating and empowering Native American women and their families.

Information about Kateri Residence and St. Stephen’s Human Services is at: https://ststephensmpls.org/programs/housing/kateri-residence.