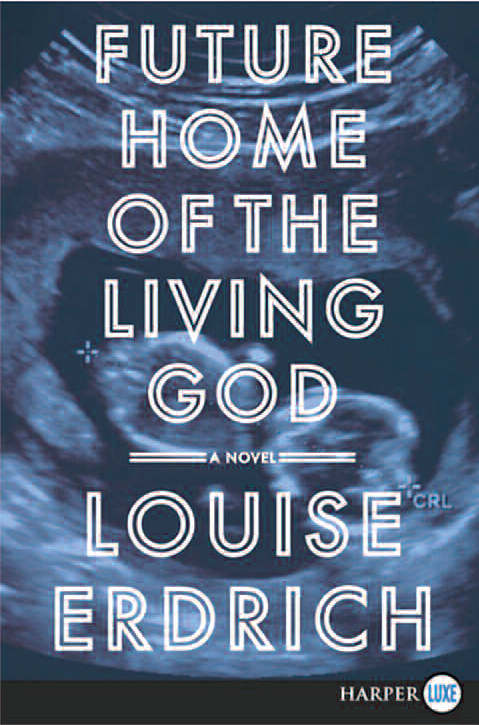 If all the basic elements of a good book emerge as you read – character development, suspense, conflict, plot intrigue, a sympathetic protagonist then how can you leave it scratching your head, asking what happened here?

Question 2: Must one always yearn for a tidy, happy face tale or is it better to briefly inhabit dark places even if they’re only a few paragraphs in length?

Finally, where does Louise Erdrich get this stuff, this simmering pot of brilliant, beautiful words and complex ideas existing within a story of pure evil and cruelty, and maybe a hint of hope at the end? Maybe not.

In case you haven’t figured this out, “Future Home of the Living God” is not for everyone. Reading a book set in a future where evolution is literally reversed and humans are doomed to returning to sludge can make your head spin. Nestled within this nightmare is a sweet account of family loyalty and fearlessness in the protection of youth and infants, and efforts by people with conscience to do the right thing.

In the end, however, what might make you squirm most is the way the story stands up to authoritarianism, misogyny, religious fundamentalism and indifference to the environment. It stands up through illumination, focusing light on the best and worse parts of human nature. In countless ways, the narrative feels contemporary rather than futuristic.

Whew.
But I’m getting ahead of myself.

The story is narrated by Cedar Hawk Songmaker who is four months pregnant and the adopted daughter of “Minneapolis liberals” who adore her and fear for her. Cedar is Ojibwe, 26, bright and often impulsive. She undergoes an ultrasound that reveals that unlike most pregnancies of that time, her baby is normal and healthy and likely to survive. At that point in human devolution, nearly all infants are abnormal and lack male genitals.

The ultrasound finding transforms Cedar into a target by a government that is forcibly incarcerating pregnant women. In this world, the punishment for having an abortion is capital punishment.

To escape the g-men, Cedar drives to a reservation in northern Minnesota to meet members of her birth family for the first time. She connects with her mother and grandmother and it’s in this section of the book that we recognize Erdrich’s familiarity with some characteristics of intergenerational reservation life. (In one scene later in the book, Cedar repeatedly walks a hospital corridor, “looking for a hole in the day.” Familiar, maybe?)

Her birth family shelters her, yet no pregnant woman can easily hide a ballooning uterus. Spies lurk everywhere in the form of disguised drones.

As danger from the outside world intensifies, Cedar grows larger and more awkward. Characters skip through the narrative, resulting in an unforgettable scene in a St. Paul cave and constant reminders throughout that people are not who they appear to be. The book often reads like a thriller that I couldn’t wait to return to.

Simultaneously, this thriller contains Erdrich’s trademark gorgeous use of English. Whereas most of us would write that the sun set, she writes: “The sun goes down, fiercely, casting radiance from the west into the eastern sky, where it edges the clouds with a blaze of gold lace.” She describes a ghostly black bridge across the Mississippi River, a river that “glistens like an oiled muscle.”

Her protagonist, the ever-growing Cedar, comes across as remarkably insightful with very deep thoughts on existence, spirituality, divinity, evolution, reproduction, Indian sovereignty and love. At the same time, you want to reach into the page and shake some sense into her as she takes goofy risks. Cedar!Don’t blow it! How many people have helped bring you this far? Think before you act!

All of the above takes us to this. Should you read the book? I vote yes, even if you don’t like quasi-science fiction. The book challenges assumptions and leaves you in a different place from where you started. You’ll read and re-read parts, grow to care about some characters, and rapidly read on to see how it ends.

Louise Erdrich, a Turtle Mountain Band of Chippewa enrollee, has written 16 novels including National Book Award winner “The Round House.” She lives in Minneapolis.