Victor Walter (Bois Forte Ojibwe) used to cut hair for a living. While giving a haircut six years ago, Walter had a client who expressed dismay over the lack of available foster homes for children in Minnesota. He asked if Walter would ever consider being a foster parent.

Back at home, Walter and his husband, Jeff Sarro, let the idea sink in. They considered what it would mean to invite a foster child into their lives. Then they took the next steps. After becoming licensed with Hennepin County, the couple received a call asking them to foster two Native boys ages 8 and 12 years old.

“We met [these] two really wonderful little boys. They were sweet and shy, but really personable,” Walter said. “We asked them, ‘Would you like to come live with us?’ and they said, ‘Yes.’”

Walter summed up the experience of fostering in one phrase: “It’s a lot of struggles, and a lot of fun, […] but being a foster parent has meant the world to us.”

In the ensuing years, the Walter-Sarro household grew to hold more children, including the sibling of the two boys. “We just felt that it was really important to keep them together and keep as much of the family structure,” Walter said.

He also expressed clear support of the children’s mother and sought to maintain contact between her and the boys: “My goal was to have them go back to her because she loves them dearly. A lot of people get this view that the biological families don’t care for the kids, but they do. They love them, and I think reunification should be the main goal.”

For Walter, providing a Native home to Native youth in the foster care system is an imperative. “We are losing our culture at an alarming rate, with each elder that dies, with each child that falls by the wayside,” he said. “It is going to be just a matter of time.” 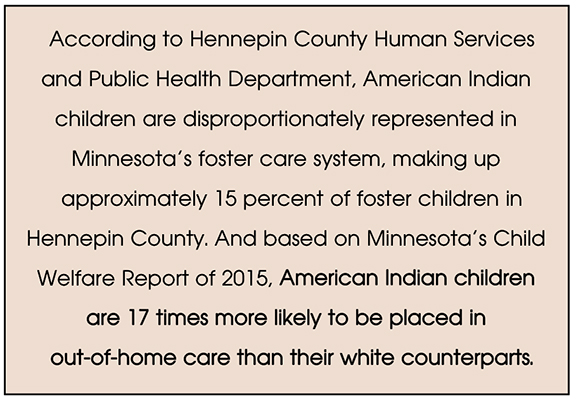 The Indian Child Welfare Act (ICWA), enacted in 1978 by Congress, requires the state to place Native children with family or kin as often as possible. But only about half of Native children in foster care in Minnesota find Native homes, according to the Minnesota Department of Human Services. Hennepin County points to the severe shortage of Native foster homes as part of this problem.

Nicholas “Cetanzi” Metcalf (Rosebud Sioux) currently works as a supervisor in Hennepin County’s Indian Child Welfare Unit. According to Metcalf, there is a concerted effort by staff to keep children connected with families and tribes.

“We are very active in [maintaining] kinship,” he said. “Connecting kids with their tribe as well as their families and scheduling visits on a regular visits, as appropriate, is very much part of our case plan.”

But Metcalf is emphatic about the need to address the shortage of Native foster homes. “We really struggle because we don’t have a lot of ICWA homes,” he said. “We need more Native homes. Our community is struggling, and we need homes to help.”

From Metcalf’s perspective, Native families bring cultural perspective, lived experience and traditions, and the ability to teach children “how to navigate the world as a Native person.”

Walter also believes that maintaining a connection to culture and ceremony from a young age is paramount to fighting cultural erasure. “I understand that non-Native families can be really supportive to the needs of Native children,” Walter said, “but I also don’t think they understand the urgency of making sure that these kids are safe and able to grow, and to keep their culture in their hearts.”

He ensures that the children in his care stay involved in activities that center Native community-building whenever possible. Each child that the couple have opened their home to brings varying knowledge of his or her culture.

“It’s really a difficult task to figure out what they know and how you can support it,” he explained. “Whether it’s going to powwows, putting out a spirit plate at meals, smudging, or sweat lodges,” Walter said, “you really have to find out what the kids are used to and at least support that. If you can, surpass it.”

Building a bridge between Hennepin County and Native communities

“When you see six-year-olds, they are kids to you. You don’t think they are going to understand the complexities of what is happening [to them],” she said. “But when you are going through a situation like [foster care], you are a lot older mentally than a typical six-year-old.”

In particular, she wished she had been assured her mother was kept safe. As a child, she did not understand why she could not see her mother. “Even though I remember being in unsafe situations with her, she is still my mother. When I wasn’t with her, I knew she was still unsafe,” Grika said. “No child should ever have to worry about that.”

At 10 years old, Grika was adopted by her third foster home in Hennepin County. “I was fortunate enough that my adopted mom is White Earth Ojibwe,” she said. “I was surrounded with my culture still.”

Grika didn’t foresee the long-term effects of living in a culturally relevant household while young. But having also been fostered in a non-Native home, she now sees the significance of being placed in a home aligning with her heritage. Looking back at her last foster home, which would later become her adopted family, Grika noted a shift in her overall health.

“I realized the difference in my mood and my mental and emotional well-being,” she said. “I felt like I belonged somewhere and instead of feeling shame for who I was, I could understand why I was different from other kids.”

If she could go back now, she wished she would have been placed in a culturally relevant environment sooner rather than later.

Grika employs this experience to advocate for American Indian youth and families as they navigate the foster care system. Having worked for the Minneapolis American Indian Center’s ICWA Program, and then ICWA Law Center, she comes prepared to her new role at Ain Dah Yung Center as the Nokomis Circle Liaison. This position emerged to better address the disproportionate number of American Indian families entering the child protection system.

According to Hennepin County Human Services and Public Health Department, American Indian children are disproportionately represented in Minnesota’s foster care system, making up approximately 15 percent of foster children in Hennepin County. And based on Minnesota’s Child Welfare Report of 2015, American Indian children are 17 times more likely to be placed in out-of-home care than their white counterparts.

Grika seeks to be the bridge between American Indian families who are at risk or involved in child protection and social workers working with the county. “[This] puts me in a really unique position,” she noted. “I use my personal experience, especially when it comes to advocacy for ICWA, to help people better understand the importance of it and why it is there.”

Central to Grika’s job is working with the county to realize the mutual goal of upholding ICWA, and recruiting and sustaining culturally relevant foster care homes.

“Collaborating with someone who has that same goal makes you so much stronger at succeeding at that goal,” she said. “I realize having those allies and that team makes a huge difference.”

The importance of understanding Native history

To increase foster homes where Native youth can find cultural belonging and community, both Metcalf and Grika believe all players interacting with those youth need to have a competent understanding of the historical trauma carried by Native communities, including the impacts of boarding schools, forced relocation, and assimilation.

“We are dealing with lots of historical trauma in Native communities,” Metcalf said. “[When] you mix it in with poverty and mix it in with addiction, we have our work cut out for us.”
Grika concurred. “I like to emphasize the importance of knowing that history and what families endured.”

Sheri Riemers (White Earth Ojibwe), who has over 35 years of experience working with American Indian communities and the foster care system, affirmed this opinion. Having directed the Indian Child Welfare Program at the Minneapolis American Indian Center for over 14 years, she now works as the Government Relations Director at Ain Dah Yung Center.

“We definitely need to boost the number of foster homes,” Riemers said. “But it’s also vitally important to have well-trained foster homes in the Native community.”

Key to the well-being of foster youth is providing foster families with the tools and resources to be trained and prepared through strength-based services.

To Riemers, the responsibility falls on people working within the foster care system, who can carry bias or misconceptions of the American Indian community and other communities of color. She advocates for thorough training of ICWA values as well as knowledge of the generational trauma and the policies disproportionately impacting Native communities to this day.

Hennepin County concentrates efforts to recruit Native American foster families, and also works with community-based foster care agencies. However, staff have learned that the most effective recruiting tool is word of mouth, just as Victor Walter was encouraged and challenged many years ago.

Native advocates point to barriers such as licensing requirements and restrictions that can limit the number of Native foster homes.

The hurdle to increase the population of culturally relevant foster care homes starts by meeting communities where they are.

“When trying to place Native youth with family or kin, I know one of the biggest barriers is that they don’t have any family in the city or they don’t pass a background check,” Grika said. “It makes it very challenging to find culturally relevant homes.”

The county is bound by federal and state laws, standards and regulations that set qualifications for foster parents, including but not limited to results of criminal and social services background checks. If local relatives aren’t an option, the county may need to place children with other relatives who live farther away, or eventually may need to consider other options that comply with the Indian Child Welfare Act.

Korina Barry (Leech Lake Ojibwe) previously worked for Hennepin County as a licensed senior social worker and is dedicated to American Indian youth in the foster care system. She currently serves as outreach director at the Center for Advanced Studies in Child Welfare (CASCW)

Barry observed a marked difference in foster children placed in safe Native foster homes. She, too, points to the merits of having well-trained and culturally relevant choices.

“There was more comfort [and] there was more understanding for Native children and youth and for biological parents, too,” she explained. “We can’t assume that all Native families have the same involvement or connection with community, but more often than not, they are connected to community resources and culture.”

Victor Walter is not fostering to adopt, and he was quick to admit that saying goodbye was not easy. Just two months ago, two siblings he was fostering left his home for “families who can care for our relatives.”

“You think you’re strong enough, but it’s really difficult when a child leaves,” Walter said as tears pooled in the corners of his eyes. “You really grow to love and respect them. They became a part of our family.”

To Metcalf, who is both an adoptive and foster parent, caring for foster children comes with its challenges, too.

“Sometimes it can be hard given the trauma the kids have endured,” he said, “so it [requires] a lot of patience and guidance for kids to get back on track.”

But, ultimately, the proud parent of two Native young men described the experience as “incredibly rewarding.”

To learn more about foster care in Hennepin County, and to find an information meeting, visit the website at: www.hennepin.us/adoption.

This article was sponsored by Hennepin County Foster Care.