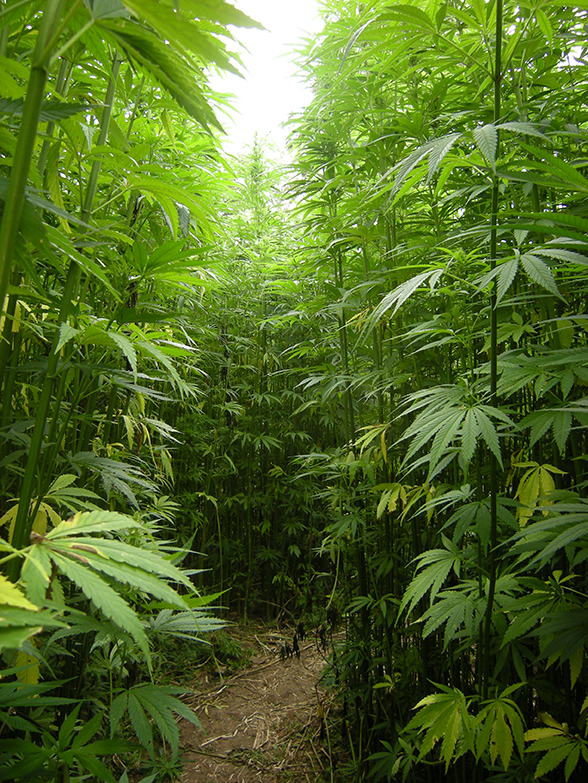 Tribal hemp growers have planted the seeds of a new economy and an innovative and holistic approach to many challenges in our territories. This spring, gathering first on the White Earth reservation and then in Colorado, tribal “hempsters” have joined an international renaissance of the plant which once clothed much of Europe and North America.

The new leaders in Tribal hemp are young – from Meskwaki, Lakota, Menominee, Mandan, Hidatsa, Colville and other nations – and are taking a place at the table of the $­­700 million US hemp industry. It’s an industry which literally can transform much of the material, food and energy world. As hemp returns as a viable part of food, clothing, housing, medicine and fuel systems, tribal hemp leaders are keen on being a part of the industry and transforming communities.

Wandering through the NoCo Hemp Expo in Loveland, Colorado in April, one can find anything imaginable made of hemp. You can slather it on, shampoo with it, eat it in chocolate or pesto sauce, fuel your car with it, or wear it.

An estimated crowd of 10,000 curious enthusiasts crowded into the convention center, and amongst them were Native people. The trade show was not about bongs and tie dyes…. but featured harvesting and processing equipment and the latest innovations in farming, as well as regulatory analysis. The industry has certainly arrived in good time.

Muriel Young Bear, member of the Meskwaki Tribe in Tama, Iowa is a second year attendee. A University of Kansas Business graduate student, she has been attending hemp related conferences, networking with industry leaders, visiting Colorado operations and working within tribal economic development to become a resource for Native nations.

“I was inspired by Hemp while looking for alternatives to fossil fuels, timber, plastics and cotton products. Initially, I started this journey after seeing the unsustainable business practices our tribal communities are dealing with, and I am determined to find an alternative. Hemp is the way to do that.” said Young Bear.

“Education was the one piece we are missing in Indian Country,” she said. Young Bear started a social media campaign and is providing education sessions to her tribe, water protector camps, and Iowa senators.

Dustin Finley has been working with the Colville tribe in an industrial hemp project. This past year, the tribe grew 60 acres of hemp in Washington state, the largest grow by any tribe. “I want to make our communities one again.” said Finley. Like Young Bear, he sees hemp as a way to rebuild a local tribal economy and bring people home.

“I want a place for people to come back home. Bring your knowledge back to your people rather than just leave it,” Finley said, referring to the “Brain Drain” and diaspora many reservations face. “I have two young sons… and I’m scared of what’s out there. Hemp can change the world.”

Muriel Young Bear, Dustin Finley, Rosebud White Plume, Marcus Grignon and Waylon Pretends Eagle are leading forces in the launch of the Intertribal Hemp Association, a new organization intended to educate Native communities about hemp and work to create collaborations for the future of the tribal hemp industry. For Young Bear and others, hemp is about healing and social change, not money.

“I began this journey about three years ago,” she explains. A student at Haskell University, she was reading books with Indigenous scholars Michael Yellowbird and taking food sovereignty internships with Dr. Dan Wildcat on decolonizing food systems. That’s when she found hemp. Hemp it turns out, is an excellent source of nutrition and amino acids, as well as a plant known to have l0,000 uses.

Waylon Pretends Eagle is from Mandaree, on the Ft. Berthold reservation in North Dakota. That reservation is in the midst of a fracking boom. Oil royalties are paid out to some families on the reservation and tribal coffers are filled with oil money. At the same time, ground water, plants and animals are suffering from the fracking.

Pretends Eagle’s family is one example of many, “My family actually benefits financially from fracking. I’d like to push us all forward.”

He also sees hemp as part of his own healing. “I just want to heal myself by growing good medicine. I have some trauma from my childhood and this is what I need.”

Hemp is known to have the ability to bioremediate some toxins (helping in clean up) and sequester carbon; both huge parts of the environmental challenges on the reservation. Hemp is seen by Waylon and others as a key in healing not only people, but Mother Earth.
The medical benefits of hemp comes, in part, from the cannabinoids contained within the plant. Those healing properties are documented in a wide variety of health conditions. Cannabinoids, and the better known cannibidiol or CBD, is one of over 100 Cannabinoids found in Cannabis Sativa L. It is a major constituent of the plant, second to tetrahydrocannabinol (THC).

Compared with THC, Cannabidiol is not psychoactive in healthy individuals, and is considered to have a wider scope of medical applications than THC, including but not limited to: epilepsy, multiple sclerosis spasms, anxiety disorders, bipolar disorder, schizophrenia, nausea, convulsion and inflammation, as well as inhibiting cancer cell growth.

Marcus Grignon, from the Menominee Tribe, is the Campaign Manager for Hempstead Project Heart. Founded by musician, poet and actor John Trudell (Santee Sioux) and Willie Nelson in 2012 to raise awareness on the benefits of hemp for people and the planet, Trudell offered his help and support for Grignon to continue the hemp work after his death.

Grignon continues to advocate to his tribe, the Menominee, to grow hemp once again. The first Menominee hemp crop was seized by the DEA in the fall of 2015. In late 2017, Wisconsin legalized industrial hemp, and the Menominee, Oneida and the St. Croix Band of Ojibwe plan to grow this year.

Meanwhile, pharmaceutical companies continue to develop cannabinoid-based drugs. In the U.S., GW Pharmaceuticals has received Orphan Drug Designation from the FDA for its CBD based drug, Epidiolex. It’s a possible treatment for a variety of degenerative (and other) illnesses including Tuberous Sclerosis Complex and Infantile Spasms, each of which are severe infantile-onset, drug-resistant epilepsy syndromes. Big pharma stands to profit well. Sales of Epidiolex are slated to begin in 2018 or 2019, and are projected by Hemp Business Journal to reach $120 million by 2020. If the Hemp Business Journal forecasts for Epidiolex prove accurate, sales of the drug will represent nearly 7% of total hemp industry sales by 2020 – an estimated $1.8 billion market.

While Trudell passed away two years ago (not in time to see the full hemp renaissance) his legacy is flourishing. Another leader of the Old Guard in hemp is Alex White Plume from Manderson and Wounded Knee Creek in South Dakota. White Plume’s battle to grow hemp on the Pine Ridge Reservation tells the epic story of the 2000 to 2016 battle of tribes to move ahead in the hemp industry. Although Pine Ridge and the Navajo Nation had passed ordinances to grow industrial hemp, tribal crops continued to be seized and the federal court barred the White Plume family from planting hemp. But in March of 2016, Federal Judge Jeffrey Viken lifted the injunction that had stopped White Plume from growing hemp on his land. Alex produced his new hemp crop in 2017.

Rosebud White Plume, Alex’s daughter, has taken up much of the hemp work for the family, and like the other young people in the second generation of this hemp renaissance, looks forward to a much brighter future. Thanks to the hemp revolutionaries of the last decades.

Nikki Vandenberg, from a tribal consulting firm, reflected on the gathering, “A lot of people compare this with the gaming industry, but the energy I feel is here is nothing like that.”
Tribes see not only money to change an economy, like gambling, but health and environmental benefits. Wealth, after all, is not just money, it is health and well being.

“This is a way to get people off of opioids,” said Lavonne Peck, former Tribal Chairwoman of La Jolla Reservation. “It’s the future; hemp is what the world needs. Hemp is the way.”
Indeed, more counselors are looking towards hemp as a part of a holistic treatment for addictions and trauma.

Wearing an entirely hemp outfit, Dionne Holmquist, founder of Hemp Quest Ventures, talked about being inspired by Alex White Plume. With a long career as a counselor, she says, “I wanted to do holistic healing, not treatment. That’s what I learned as an addiction counselor. We were just treating people and not healing them.”

Her experience motivated her to do more and eventually led to her current role leading multiple efforts in the hemp industry. Her company is based in Colorado but she will work with tribes to move their efforts forward.

For those concerned about any new regulations which would limit tribal and other national hemp markets, most industry and legal analysts are not worried. “That train has left the station,” Don Wedll, in his third year of growing hemp, says. “You can buy CBDs at Walmart.”

To further cement Wedll’s sentiment, S.2667 (Hemp Farming Act of 2018) was recently introduced by senior Senator Mitch McConnell from Kentucky. It was quickly given a second reading by the senate and is expected to pass in the Senate.

Hemp Business Journal estimates the total retail value of all hemp products sold in the U.S. to be at least $688 million for 2016. The data demonstrates the hemp industry is growing quickly and according to Sean Murphy, the Founder and Publisher of the Journal, sales are projected to be nearly $2 billion by 2020, led by hemp food, body care, and CBD-based products.

It is one of the fastest growing plants, and was one of the first plants to be spun into usable fiber 10,000 years ago. This spring, a planting in Native communities brings more promise. With it a new collaboration is growing in Indigenous nations. Some tribes will grow, others will enact regulatory authority, and more tribes will come to the table in what promises to be an economy that can change many facets of our lives. The plant is here to stay.

With tribes like the Anishinaabe, Crow, Oneida, Odawa, Menominee, Navajo and Omaha interested in industrial hemp, it is clear that the renaissance of hemp is now.

Concert brings together multiple music genres in defense of water