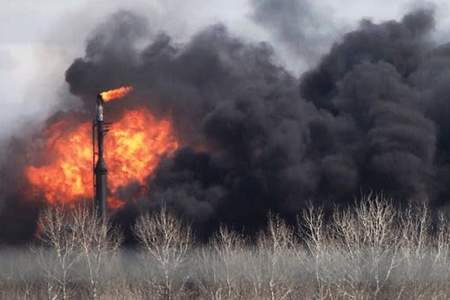 The Husky Oil Refinery’s catastrophic spill and fire in Superior, Wisc. on April 26th points to the problem of oil and water. With immense gratitude for the firefighters who extinguished the tar sands oil fire, we are alive. They were able to stop the fire before it spread to the tank of hydrogen fluoride, 200 feet away. That would have been a major catastrophe. According to the Star Tribune, a “dense cold killing cloud” would have put l80,000 people at risk. We got a break, we all should be grateful.

The situation we are in is dangerous and getting more so. The oil which gushed and burned was delivered by Enbridge, through their present lines to the Husky Refinery. Enbridge and Husky are both Canadian corporations, who have an immense impact on the future of our region. The impact from this accident on Gichi Gummi (Lake Superior) and our health is not clear, nor will it be this year as lingering contamination is unknown. All we know is that we are lucky, and that it’s time to clean up, not make more of a mess.

Essentially, that’s what Administrative Law Judge Anne O’Reilly said in the April 23 decision on the proposed Line 3. Noting that climate change is increasing, Enbridge’s liability is limited, and the old pipeline would be abandoned leaving the mess for Minnesota landowners and tribes, the Administrative Law Judge believes that Enbridge needs a non-leaking pipeline, but did not recommend approving the so called “preferred route” and opening a new corridor.

Instead, the judge ruled that the permit, if granted, should be in the present corridor. The Judge noted that she could not order sovereign tribes to grant an easement. This is a problem for Enbridge, as a quarter of the line crosses Leech Lake, Red Lake and Fond du Lac reservations, and more crosses treaty territory.

As Judge O’Reilly notes, “To give Applicant the right to place and, thereafter, maintain Existing Line 3 (and five other pipelines) on the Leech Lake and Fond du Lac Reservations, both Tribes had to voluntarily execute a grant of easement for right-of-way to Applicant. An evaluation of those easement agreements – and the current sentiment among tribes about pipelines running through tribal property – shed light on why Applicant has chosen to pursue a new route for Existing Line 3 outside of the Mainline corridor. It also brings into question whether Applicant will be required to remove Existing Line 3 from the Reservations if the Commission allows the line to be abandoned in-place, as proposed. Moreover, it begs the question of what will happen in 2029 when the existing easements for these six pipelines in the Mainline corridor expire…”

The Leech Lake government has been adamant about the opposition to the routing of the pipeline in the old corridor; and Red Lake has asked the company to remove pipes illegally trespassing on tribal trust land. This leaves Enbridge in a legal and policy conundrum. Enbridge has proceeded with extreme confidence and placed all corporate eggs in one basket – a new route.

That route, called the “preferred route”, cuts south of Park Rapids, Outing, the White Fish Lake chain, and the heart of Sandy Lake territory. They have done no major assessment of another route. Although the company says that most landowners support the line, the company does not disclose that many easements are granted across the tax forfeiture land in some of the poorest counties in the state.

Spring has finally come. Winter, the longest I can remember in my history, lingered and lingered. In Ojibwe traditions the time of the Wiindigo came, Gaa Biboonike (the Winter Maker) finally has been sent to rest by Ziigwan, (Spring).

Climate change related disasters caused the US $l90 billion last year, from the collapse of Puerto Rican infrastructure to the California wildfires. This year we hit 440 PPM Co2, the largest amount of carbon in our atmosphere in history. Enbridge’s proposed Line 3 would add 220 million more metric tons of C02 to the environment annually. As well, it turns out that Enbridge, although the third largest corporation in Canada, is not liable for a catastrophic spill here, whether in Hubbard County or the heart of Wild Rice territory. That’s what Judge O’Reilly found in her 450 plus page decision, recommending against issuing Enbridge a permit for a new route.

Although Enbridge is the third largest corporation in Canada, O’Reilly found that the corporation, through a series of limited liability subsidiaries, is protected from liability for a spill of catastrophic magnitude.

In short, O’Reilly finds that liability would remain with the people and land of Minnesota, not the big Canadian corporation.

That’s a bit of a problem in her mind, and along with the recognition of the ecologically sensitive corridor, the broader issues of energy economics, survival of Anishinaabe people, and deep concerns about “abandonment”, which span many pages of the report. The Judge did not recommend the new corridor.

For Superior Mayor Jim Paine, the catastrophe of an Enbridge Oil explosion at the Husky Refinery was probably enough to jar his city and all of us into a dose of reality of not only that oil and water do not mix, but that we are in a dangerous time.

The dangers of this time were also recognized by the Minnesota Court of Appeals in a landmark case of two women charged with turning the valves at Enbridge’s Clearbrook facility and stopping the flow of oil. On April 23, hours before the Administrative Law Judge decision, the Minnesota Court of Appeals recognized the unusual “necessity defense” case for the Water Protectors. Emily Johnston and Annette Klapstein shut of valves on October 11, 2016 as a part of a national coordinated effort by Climate Direct Action activists who shut down five pipelines carrying tar sands oil from Canada. Tar Sands oil is considered the dirtiest oil in the world.

This is a moment in history. State agencies like the Department of Health, Commerce, the Administrative Law Judge, tribal governments and at least the 68,000 people have testified against Enbridge’s Line 3 proposal. As Annette Klapstein and Emily Johnston courageously face felony charges for stopping the tar sands pipeline, it is indeed a time of necessary and courageous action.

Water Protectors prepare to camp on the line in the l855 treaty territory. Over half the line is on public lands, where anyone can camp for up to two weeks at a time. Summer is the season of excellent camping in Minnesota, and for many of us “necessary action”. In the meantime, Spring is here, full of promise after a brutal winter. Let us pray for our Gichi Gummi and those who live on her shores in Superior. And, let us be grateful for the water and life bestowed upon us.