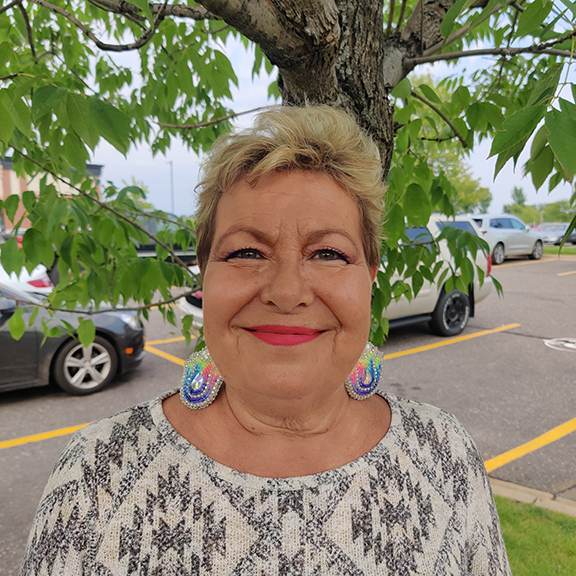 I handed tobacco to Mary Beth Elhardt, a Cherokee woman who is an elder, mentor, and educator. “Thank you for letting me interview you,” I said.

“Whatever I say, just make me sound cool,” Elhardt says, taking the tobacco with her left hand. “I’ll put this to good use.”

We walked into the kitchen and took a seat. Elhardt grabs a chair across from me and starts eating from a bowl of Cheez-Its. “So. What’s this interview about, anyway?” She had agreed to do the interview with me before she even knew what it was about. That’s just the kind of woman she is – always looking to help her people.

“I’m doing a piece on Indian Education, and I thought who better to interview than someone who’s been in the business for as long as you have,” I replied.

Elhardt has been an Indian Education advisor for Minnesota’s Anoka-Hennepin ISD-11 school district for the past eighteen years, working with Native American students on both academics and culture.

Indian Education began in Anoka-Hennepin in 1973, a year after the Indian Education Act passed, which recognized that Native American students have unique academic, language, and cultural needs and began the process of providing necessary support to better serve Native students. Elhardt has been an advisor for almost half of the program’s existence.

“I was working over at Champlin Park as a special education Para[educator] and I had a workshop over at the ESC [Educational Service Center]. During a break, I looked at the board with jobs and they had a position open for Indian Education. I didn’t even know that our school district ​had​ Indian Education,” said Elhardt.

I asked Elhardt what drove her to apply for the position.​

“Well it involved my culture and I was really excited to get back to it and work in it. As soon as I was hired, I knew that I had found my right niche. There was something about it that just fit. I knew that I wanted to work with young people and, even though they weren’t Cherokee, I knew that I was back with my own people, which felt like an immediate sense of home.”

That sense of home is a feeling that is felt among the students, as well. For many Native Students in ISD-11, a district that has a relatively low Native student population, going to Indian Ed. meetings is one of the only opportunities they have to be around people like themselves. In addition to providing academic support and cultural lessons, Indian Education also builds a sense of community for the students that it serves.

Indian Education serves to help rectify the intergenerational trauma of genocide and assimilation that’s been inflicted on Native Americans for the past several centuries. The boarding schools, one of the more recent deliberate acts of assimilation, left many Native families weary of the education system and robbed them of their cultures and languages.
Despite that, Elhardt has always had a strong sense of who she is. “I was born knowing my Native identity. My grandmother was in Carlisle Boarding School and because of that, we weren’t given much, but she told us a little bit – like how to introduce ourselves. She told my mother more, so I mainly learned from her.”

Elhardt said, “In my school district, I’ve seen teachers come around in terms of their attitudes toward the program and actually ask us questions about the things that they’re teaching, recognizing that in that situation, we’re the professionals. Nothing ever really changes about the students, because the students are always great.”

“We have a high graduation rate and a high number of students who go on to higher education. Over the years, the staff in the schools have become much easier to work with, and we have much more funding than we used to.”

She also mentioned that she’s noticed more consistency in the program over the last couple years than in the past, which helps her better serve her students.

The discussion turned toward how the recent COVID-19 pandemic had affected her students when distance learning first began being practiced. “A lot of them were struggling with simply learning how to navigate the system. The first couple of months, they took it more as a vacation. I’m sure a lot of them slept in. A lot of them didn’t think that the work they did online was going to really add up to anything. Some didn’t have parental supervision, so they didn’t sit down and do it. It seemed like the students who had parents at home did more work, ” saidElhardt.

However, it wasn’t just the students who were struggling. Elhardt said, “The other difficulty is not being able to see them face to face. When they’re having low moments, you can always pick up on those signs where the distance learning doesn’t allow that so much.”

A big part of being an advisor is offering moral support, as well. The position meshes together the roles of an academic advisor, counselor, mentor, and cultural teacher.

Because of this, many advisors grow close connections with their students and, at the end of the day, Elhardt misses them. Many of them she’s known had since they were in kindergarten.

That doesn’t mean, though, that she’s against distance learning. “I think that for the safety of the students, as well as the teachers, schools should not be back in session. I think they could improve the distance learning right off the back by having a district wide meeting and give them the instructions right up front so that the students have a little more of an idea of what they’re actually supposed to do. And not assigning so ​much; start off slow and ramp it up later. After all, this is an unprecedented time. Everyone’s stressed,” said Elhardt.

The Anoka-Hennepin school district is set to begin the 2020-2021 academic year using a hybrid model of distance learning. Students will attend class in person two days per week and virtually three days per week. Elhardt is optimistic about the district’s plans, although she would rather it be completely online. “I feel that if we were to continue with distance learning, it would get much better because now they know how to navigate the system, they know that those grades count, and they realize that they have to do better in order to graduate.”

I asked Elhardt what advice she would give Native students throughout Indian Country.

“My advice to them would be to work as hard as you normally would during a regular school year. Homework counts, the grades count, and this won’t be forever. Eventually, you’re going to want to go on to some form of higher education and to do that, we all need to persevere through this,” she said.

As Elhardt said, these are indeed unprecedented times. We have to take accountability and hold one another up during these times of need and hardship. Though for us Indians, it shouldn’t be tough – we’ve been doing it for centuries. After all that we’ve gone through, what’s one more pandemic?

COVID has everyone pondering where, and how, to start school

For Native students in Morris, finding ways to excel in a place of trauma