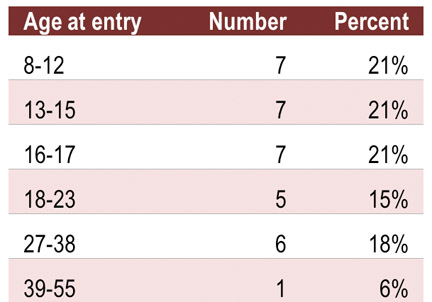 Three decades ago, the relatives of an eleven-year-old Native girl in Minnesota forced her to have sex with a man in exchange for alcohol. The story was not front-page news. It was not the subject of a feature-length film with a happy ending. No one intervened. But when she turned eighteen, the police started paying attention. She was arrested and convicted over twenty times for prostitution.  Her parents’ addiction became her own, and she entered treatment dozens of times.

At an early age, the girl became one of hundreds, maybe thousands, of Native American children and women forced into prostitution in Minnesota, falling under the radar of social services, the community, and the media.

“If it was a bunch of white, blonde hair, blue-eyed girls, believe me,

there would be an end to this,” said Vednita Carter, executive director

In September, the Minnesota Indian Women’s Resource Center became the

first organization in the state to release a report about the

widespread trafficking of Native women. The agency hopes its effort

will draw attention and funding to Native victims of sexual

Advocates say the report’s findings cast little doubt that the

situation has already become a crisis. In a sample of 95 Native women

seeking services from the resource center, 40 percent reported being

the victims of commercial sexual exploitation.

Sixty percent of the women surveyed entered prostitution or pornography

before the age of 18. And about one-fifth had been sexually exploited

before their thirteenth birthday. When the girls become adults, the

exploitation often continues. They remain in prostitution, but the law

often no longer views them as victims, but as criminals.

scientist Alexandra Pierce, focuses on women who live outside of

reservations. The report compiles statistics, identifies flaws in the

legal system, draws parallels to the historic exploitation of Native

people, and makes dozens of suggestions about how to address the

Although the legal system treats prostitution and trafficking

differently, the report often uses the terms interchangeably, as many

advocates believe that prostitution can never be considered fully

consensual. The prostituted woman is the true victim of the crime, they

“There’s a general acceptance that prostitution is a lifestyle choice,

when it’s actually a federal crime against women,” Koepplinger said.

The report found that Native women have been disproportionally impacted

by sexual exploitation. For example, Native American women make up

prostitution-related offenses, according to data from 2007. But Native

women represent only 2.2 percent of the county’s population.

Past treatment of Indian women

Some of the reasons for the staggering numbers are clear. Native

Americans have the state’s highest rates of homelessness, poverty, and

alcoholism – what many call the legacy of hundreds of years of

colonialism. But the report also argues that generational trauma plays

women over hundreds of years, treating their bodies as disposable and

In one account from the 1860s, a white rancher describes a government

attack on the Cheyenne: “I heard one man say that he had cut out a

their hats while riding in the ranks.”

Other more recent practices, including the involuntary sterilization of

Native women and the Indian Adoption Project (which removed Native

children from their homes), added to the collective trauma, the report

In Minnesota, advocates say that Native women have been prostituted

onto ships in the Duluth harbor for generations, although local law

enforcement say that they have not noticed any trafficking since harbor

security was ramped up after 9/11.

“Girls have conversations with their mothers about their time, when the

mothers were working on the boats,” one advocate said during a

round-table discussion conducted as part of the report. “Many of the

girls were conceived out of working on the boats.”

vulnerable to exploitation, the report says.  Once women enter into

prostitution, they are less likely to ask for help, as violence against

Sexual exploitation in the Native community

Advocates say that many Native communities have also normalized sexual

exploitation. Although data is limited, the fact that Native women are

often exploited in childhood suggests that Native men play a

significant role in their abuse. In many close-knit Native communities,

women may have difficulty speaking out.

“It’s a very difficult issue because it’s a very painful issue,” Koepplinger said. “But not talking about it hasn’t helped us.”

her Native community, “Some of the elders don’t appreciate that.”

Another participants agreed, saying, “Oh, I know, I know. I was ‘that nasty girl who talks nasty.’”

If the girls don’t find help before they turn eighteen, the legal

system takes over, often criminalizes their abuse, and fails to

exists among both advocates and law enforcement about the best

“Police get a hold of them first,” said Linda Miller, executive

director of Civil Society, a non-profit that provides legal and other

assistance to trafficking victims.  “They’ve declared that they’re not

going to look beneath the surface.”

to coordinate services for victims of trafficking. The police

department trains officers to recognize signs of human trafficking when

However, many women are distrustful of law enforcement, and Schnell

course of time and doing that investigation via prosecution or defense

counsel, there are different places where there can be interventions to

Carter, of Breaking Free, said that St. Paul police officers have been

officers are bringing women directly to Breaking Free instead of jail,

Nonetheless, arrests continue, and advocates say that a prostitution

“Not many women want to spend the rest of their lives saying that they engaged in prostitution,” Miller said.

Minnesota law does provide some additional legal protection to victims

requires that traffickers use “force, fraud, or coercion,” state laws

say that a person can never consent to being sexually exploited. Under

state law, anyone who had been prostituted by others is considered a

In May 2009, the Minnesota legislature unanimously passed an amendment

to the state’s sex trafficking law. The amendment allows prosecutors to

give sex traffickers higher penalties when the offender repeatedly

traffics victims into prostitution, where bodily harm is inflicted,

where an individual is held more than 180 days, or where more than one

victim is involved. The amendment also categorizes sex trafficking as a

“crime of violence,” which prohibits traffickers from owning firearms.

As of late October, prosecutors have not convicted any traffickers

under the amended bill. Advocates say the lack of prosecution is not

surprising. It’s a lot easier to arrest the prostitute on the street

than investigate what could be a larger, more organized business, they

2000, involving two Native girls being trafficked onto boats in the

Duluth harbor. The officers even obtained video footage that showed the

girls going onto the boats.

law enforcement’s efforts to prosecute the case. “That was really

frustrating for all of us” he said. “We really wanted to go after those

cases involving the trafficking of Native women in recent years.

However, she says that the lack of cases does not mean that trafficking

does not exist, but that women face barriers to reporting their abuse.

“In my mind as a prosecutor, the barrier is not the language of the

statutes,” she said. “The real barrier is the lack of reports and the

lack of awareness by system’s personnel,” including health care

traffickers, but also the individual men who pay for sex. Carter, of

Breaking Free, said she believes that the men should receive felony

convictions as a deterrent.

“We believe it’s about supply and demand,” she said. “And there’s so

much focus on the supply, which is the women. The demand is the men who

buy them. That’s what keeps prostitution thriving is the demand.”

prostitute, and Carter says the program has had some success. Out of

about 400 male participants, only a handful have been re-arrested. But

she cautioned that this might not reflect the true reality. Men may

On the victim’s side, advocates say that women have little incentive to

come forward and share their stories. Few services exist for victims of

trafficking. The situation is often parallel to that of domestic

violence victims. Without adequate support, leaving the situation could

place women at greater risk of violence, including murder, advocates

Programs like Breaking Free, Women of Nations, the Minnesota Indian

Duluth, and others are trying to address the problem, but advocates say

program for women, but they had to turn away 50 women and children last

year. About 150 women are on the agency’s waiting list for supportive

The report also recommends other measures, including: raising awareness

of the problem, increasing criminal penalties for purchasers of sexual

services, training health care workers and others to identify signs of

sex trafficking, and providing job opportunities for victims of

Although advocates are quick to point out that sexual exploitation is

not unique to Native communities, they say that Native people need to

take some responsibility for addressing the situation. The first step,

they say, is ending the silence that exists in many close-knit Native

“If enough people in the community say this is a problem, then we can get something done,” Koepplinger said.

Advocates emphasize that Native people can also draw on specific

cultural strengths to confront the problem. For example, the American

recover from their experiences.

saying that I don’t want this to happen to my daughter,” said Sherry

Meanwhile, advocates say they hope that agencies will collect more data, which could be used to secure badly needed funding.

As part of this initiative, the Minnesota Indian Women’s Sexual Assault

more about their struggles, and to ask the women for input about what

services would be useful.

The agency hopes to interview 100 women by February, and intends to

hold a community feast to celebrate the project. Plans are also in the

identify and begin to more fully address the problem. “I’m not naive

enough to think we can do this in the next two years, but we have to

In the meantime, every day Native woman are being prostituted in

Minnesota. The story of the woman who was sold into prostitution at age

eleven demonstrates the challenges of intervention.

The woman did not connect with social services until her mid-‘40s. By

that time, she was entrenched in a cycle of violence. Civil Society has

provided her with emergency help several times over the past few years,

but she faces limited options.

Right now, she is once again in treatment for alcoholism, and Miller,

of Civil Society, said she still hopes the woman can create a healthy

life for herself. But, she added, “Her story, and the other victims we

see, are just the tip of the iceberg.”

If you are being prostituted, sexual exploited, or trafficked, there are agencies that can help you. Here are several: