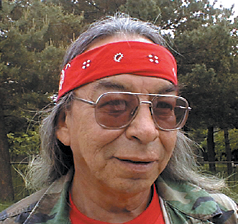 The time to harvest maple sap came and

we were ready. By we, I mean the crew, son Joe, son Aaron, nephew

Kris and two daughter in laws, Sara and Jackie.

We have been working together for

bush. That was my goal when I invited them all to work with me. The

Months before we tap we talk. We

decide which trees we will use. This year we found a better place to

get the gallon jugs, our drills are still good from last year. We use

electric and hand drills to make the holes in the trees. Because of

attrition we made some new taps.

The deep snow was a handicap, my

brother Vern said he slipped off the trail and sunk into the snow,

the only part of Vern that was showing was his hat, now that’s

deep. My crew had to wear snowshoes most of the time.

In our first boil we began with 110

After having the appropriate ceremony.

The syrup was delicious and I am glad we do this every year.

I think we will have one more boil

before we pull the taps to close another successful season.

Follies motored to the state capital. The event was to rally support

for the legalization of cannabis. The people gathered in the rotunda

of that huge building, the one with gold horses on the roof. Nathan

Ness invited me to say a few words. So I did. I support the

legalization of cannabis. As my son said, I outed myself. By the time

NORML was there passing out t-shirts,

brochures, and posters. I got an extra shirt for my wife.

Cannabis has helped pull me through

I do not support pipelines, my tribal

government likes pipelines because they have 18 million reasons to

like them. That is how much the pipeline company paid our tribal

I know of two explosions that happened

to the existing pipelines, one was in the Ditchbanks and the other

was just south of the Black Bear Casino. That one threw rocks and

In one of the most usual projects

ever, Trudy Vrieze asked me to be part of a cat calendar she is

working on. I know the world is divided into those who love cats and

those who don’t. I am one of the don’ts. Someone asked me if I

liked cats, I responded with that old vaudeville line. “Sure, I

like cats but I don’t think I could eat a whole one by myself.”

In spite of that I agreed to the photo shoot. Trudy assured me it was

for a good cause, she was raising money for people who care for and

Sure enough Trudy showed up with her

long-lensed camera and her husband Robert. She said she could stop by

We had to borrow a prop cat from my

son Joe. I didn’t catch the cat’s name. I don’t think anyone

threw it. Joe and Sara were the cat handlers. They handed me the cat

and I sat on the couch in front of the camera.

Trudy wanted a photo of our two faces

next to each other. I could feel the cat tense up, he (or she) was

getting ready to jump using my chest for traction. I could feel the

cat’s claws beginning to dig in.

Buster Brown Shoes liked cats about as much as I do. For the duration

of the photo shoot they were caged and delegated to the basement.

When Trudy thought she had enough

photographs to choose from, the handlers took the cat away from me.

I went downstairs to rescue the two

dogs from their exile. They both ran upstairs and began sniffing

around, they knew a cat had visited, I surmised.

Trudy began shooting photographs of my

two handsome dogs. Both went to the front window and leaped up and

put their paws on the window sill. They looked photogenic. She

agreed. She took some more photographs outside where the dogs

The views expressed here belong to

the writer alone, they are not meant to represent this tribal

government, this Reservation, this newspaper or anyone else. Comments

and bingo packs can be sent to FdL Follies, PO Box 16, Sawyer,