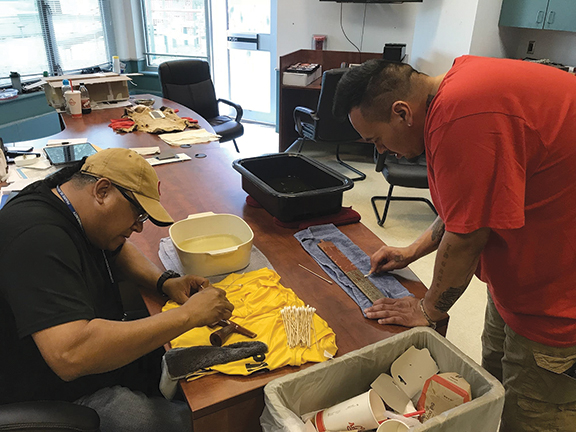 Art Owen pored over pictures of the sacred pipe, knowing the last Native American to touch it had been forced to surrender it weeks before dying on the gallows.

Made from Minnesota pipestone, decorated with lead inlay of animal figures, stars and other designs, the pipe had been taken from Chief White Dog, a Dakota leader hanged the day after Christmas in Mankato, Minn., in 1862, the largest mass execution in American history.

Like so many other Native relics, White Dog’s pipe had simply disappeared after that, lost to the decades before surfacing suddenly last spring in a Boston auction house catalog.
The auction photos excited Owen and other tribal members, but it was late in the game.

Now, it seemed the pipe would disappear again, another sacred piece of Minnesota Native history sentenced to life as a bauble in some wealthy investor’s private collection.

Owen, a spiritual leader in the Prairie Island Indian Community, studied the pictures and wondered what could be done. Could a treasured piece of Minnesota’s Native past be rescued more than 150 years later? This time, could the story of a lost Native artifact be changed?

‘Straight as an arrow’
White Dog had lived as a respected Dakota leader in southwestern Minnesota, a chief who signed several treaties with the United States government.
Before the 1862 war, he and other Dakota farmed along the Minnesota River and lived in wood frame houses. It was part of the government’s attempts to force the Dakota to adopt a western lifestyle. 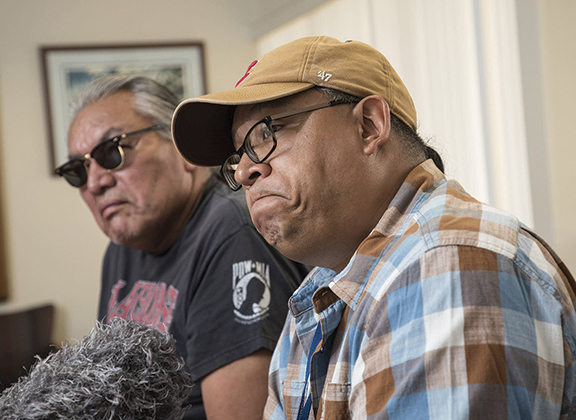 The experiment collapsed when promised government money and food payments to the Dakota were late to arrive in August of 1862. Near starvation, they went to war.

The pipe became caught up in the turmoil, with differing accounts of what happened to it.
When it was presented for auction in Boston, a decades-old label on the pipe recounted that shortly before he was executed White Dog gave the pipe to a federal soldier as a peace offering.

But there are plenty of reasons to doubt that story, said Franky Jackson, compliance officer for the Prairie Island Indian Community.

“We knew that many of those prisoners had things taken from them at that time,” said Jackson. “An item like this would never have been given up so easily.”

The shorthand account of scenes from the fall 1862 military trials of imprisoned Dakota near Redwood Falls, Minn., describes White Dog as “fine looking, straight as an arrow.”
It then describes a fight, date unknown, between a soldier and the chief over White Dog’s pipe.

The soldier threatens to kill White Dog unless he hands over the pipe, but White Dog resists. Finally the soldier takes possession of the pipe, proclaiming, “I have the greatest relic.”

“This was taken from White Dog when he was a prisoner of war,” said Jackson. “It was taken forcibly.”

The notes say the soldier who stole the pipe turned it over to Army officers under threat of punishment. Later, it was displayed in the offices of a newspaper, but then disappeared into unknown private hands until the Boston auction.

The federal government had sentenced more than 300 Native Americans to death for their roles in the six-week war. President Abraham Lincoln commuted most of the sentences. White Dog and 37 others were hanged on Dec. 26, 1862.

Jackson found out about the auction from a Facebook notification. He put the word out quickly to other tribal members. Minnesota’s Dakota communities asked the auction house to cancel the sale, arguing the pipe was a sacred object that should be returned to them. The auction house refused.

So the Prairie Island Indian Community decided to bid on the pipe. Jackson, though, said that didn’t happen either, because the band failed to get a bid ready in time for sale day.
The pipe sold for almost $40,000, double the pre-auction estimate.

That’s typically where the story ends when it comes to Native American artifacts. They do not come back.

Often in private hands, they’re sold at auctions and through other channels. It’s an active, growing market, one that’s long frustrated the Prairie Island Dakota and other Native people because there’s not much they can do about it. They feel they are the rightful owners of these items and that they should be returned to them, but that rarely happens. This time, though, the pipe’s mystery buyer had a surprise for just about everyone.

‘Come to take you home’
“About an hour after the auction closed, we received a phone call from the auction house,” said Jackson. “And they shared with us that the person who had won the bid was interested in returning this pipe back to the Dakota people.”

It was true. A benefactor, known only to the auction house, donated White Dog’s pipe to the Prairie Island community. 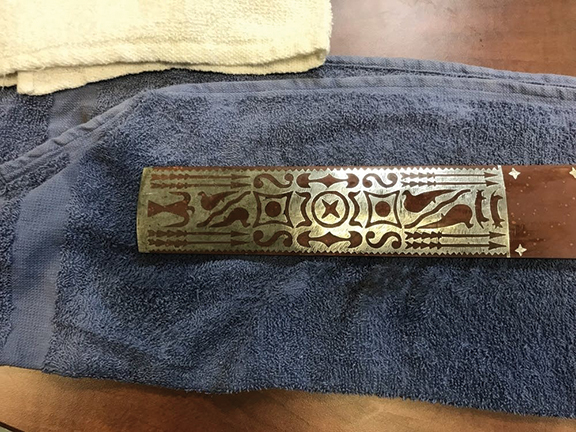 Days later, the Prairie Island delegation arrived at the auction company’s offices in Boston to take possession. Owen sang songs of welcome to the long-missing relic.

“I entered the room, and I saw it there,” he recalled in during an interview last May. “And that’s when I said, ‘We’ve come to take you home.’”

Owen remembered the pipe feeling alive with spiritual energy. “It shook that whole place, because it felt so good. On the way home, I prayed from leaving Boston to the time of landing.”

The delegation was disappointed with how the auction company had haphazardly stored the sacred object, in a box with other items on top of it, said Prairie Island’s president, Shelley Buck. But that initial displeasure soon gave way to a new emotion.

“My heart was happy,” said Buck. “It was a joyous occasion for me.”

The return of the ornate, inlaid pipe to Prairie Island became a spiritual rallying point for the community in southeastern Minnesota, a symbol of both destruction and rebirth.
After it was brought back to Minnesota, the roughly 2-foot-long pipe was cleaned and studied. Research indicates it could date to the late 1700s.

“I’ve seen hundreds, if you will, thousands of pipes over my career,” said Jackson. “And I have never seen one that matches the creativity or the craftsmanship of this pipe.”
The return of the pipe was a unifying moment for the Dakota people and the chief’s descendants.

“I believe that the pipe is here to bring us all together as one,” said Adelle White Dog, who traveled from Eagle Butte, S.D., this summer to see her great-great-great grandfather’s pipe in person. “We are stronger.”

White Dog helps run a homeless shelter in Eagle Butte. Homelessness is one of many social issues that plague reservation life. She and others say the roots of those ills go back to the forced breakup of the Dakota nation after the 1862 war.

Family ties were shattered when Natives were rounded up and marched first to Fort Snelling in the Twin Cities, then transported to reservations in Nebraska and South Dakota.

When she viewed the pipe at Prairie Island, White Dog said she could feel the presence of family members who’d passed.

“Crying, joyful feeling just to be there with my grandpa’s pipe,” said White Dog. “And just feel that grandpa was there, my dad was there, my grandma was there, my brothers and sisters. All our relatives were there.”

‘Where it took me’
If the pipe was the start of a spiritual rebirth for some Dakota, it also brought other chapters of Prairie Island life to a close.

Spiritual leader Art Owen supervised the return of the White Dog pipe to Dakota life.
He held it on the plane back from Boston. Then he took the pipe on a tour of the countryside, stopping at eight spiritually important locations along the Mississippi River, including Maiden Rock in Wisconsin and the bluffs at Red Wing.

He prayed at each stop and told the pipe, “Welcome home.”

Shortly after that, in an interview last May, he seemed to know that his time with the pipe was about over.

“It’s up to someone else to see its direction,” Owen said. “You know, I can only share with you where it took me.”

A few months later, in October, the 68-year-old Owen died.

Looking back, those who knew him say he seemed in a hurry to reintroduce White Dog’s pipe to Dakota life.

He felt that it was part of his job to help put back together a culture torn apart more than a century ago.

The pipe was a piece of that reconstruction. It was a demonstration that broken links can be reconnected, that things thought lost forever sometimes return, that it’s possible to rebuild a nation.

Minnesota Public Radio News can be heard on MPR’s statewide radio network or online at www.MPR.org.