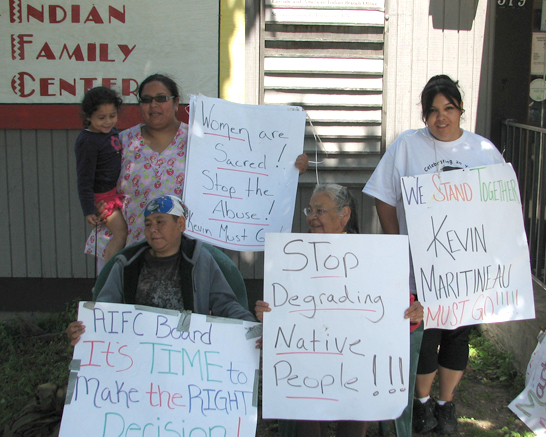 Kevin Martineau, Executive Director of the American Indian Family Center (AIFC) in East Saint Paul, is at the center of a protest and pending investigation by the organization’s Board of Directors for what employees and former staff members describe as "angry outbursts and intimidation practices." Staff members said that Martineau, a member of the Mendota Mdewakanton Dakota Community, has held his position for between four and five years.

According to a recent press release issued by protestors, over 90 community members attended an AIFC staff meeting on March 17 where they confronted Martineau with their allegations. Since March 22, staff and community members, largely comprised of a rotating group of dedicated women, have picketed outside AIFC.

"Our main goal is to have Kevin either resign or have the Board terminate him as an employee," said Yellow Cloud Provincial, a community member who has volunteered to be the media contact for the protestors. "His behavior wouldn’t stand in any working environment."

Martineau has not been into the office since the protests began and was unavailable for comment. No current or former AIFC employees wished to be identified in the press, citing fears about job security and jeopardizing the pending Board investigation.

One former employee feels that the protest is a crucial next step. "Our intent is to shed light on what’s been going on for so long," she said. The former AIFC staff member, who worked at the organization for about a year before resigning, felt discriminated against by Martineau for being openly gay.

"He said that several employees were ‘too flamboyant ‘ so they put clients off, but told me that I wasn’t ‘flamboyant,’ so I was all right," she said.

An anonymous current employee feels that a protest was the only option open to staff and community members with objections to Martineau’s conduct.

"People felt there was no other recourse," she said. She said she has complained about Martineau’s behavior to the Board on three occasions, and that she knew of at least four other employees who filed formal complaints.

"The Board was aware of how it was effecting employees and did not respond to complaints for nine months," she said.

Another unnamed staff member echoed this concern. "The Board promised to include the community in the process, but never did," he said.

However, Elona Street-Stewart, who has served as Chair of AIFC’s Board of Directors since 1997, stated that she had not heard of complaints against Martineau until two weeks ago

"The board will always give priority to addressing issues," said Street-Stewart. "I made sure that they were welcomed and that we had a chance to hear their concerns."

She feels that the Board’s perceived lack of responsiveness can be attributed to misunderstandings about how it functions.

"With the hours that we put in, we’re doing quite a bit of investigation with other responsibilities on the Board," Street-Stewart said.

The seven-person Board is two weeks into what they say will be a six-week investigation into the accusations against Martineau. They plan to reach a decision by the end of June, although Street-Stewart said that she will allow more time to review information if necessary. She plans to speak to at least two staff members about direct experiences they have had with the Executive Director.

Street-Stewart, staff, and community members all agree that this recent controversy should not reflect negatively on the services and programs available at AIFC. The organization began under the Ramsey County Children’s Initiative in 1994 and opened as an independent non-profit at its present location in 1997. The Center offers culturally-specific Family Support Services and Employment Support Services. These supports include a wide range of programs, such as mental health and substance abuse services, youth and parenting programming, child abuse intervention, employment counseling, and job skill development.

"The family center has great programming and employees," said one former employee.

Street-Stewart, who has been actively involved with the Center since its inception, sees the organization as a vital part of the Native community in Saint Paul.

"Even with the protest, my hope would be that nothing is happening to damage the credibility of the Family Center and that anyone who wanted to participate certainly wouldn’t feel intimidated in any way to become a part of it," she said.

One AIFC employee, who wished to remain nameless, said that he thought the protest could have positive outcomes for both the staff and community.

"The message, banter, and talk is real," he said. "These people have a voice."

Protestors welcome anyone interested in participating to join them at 579 Wells Street during weekday, working hours. Any staff or community members who would like to give statements regarding the pending investigation should contact Street-Stewart via email at: streetstewart@comcast.net.