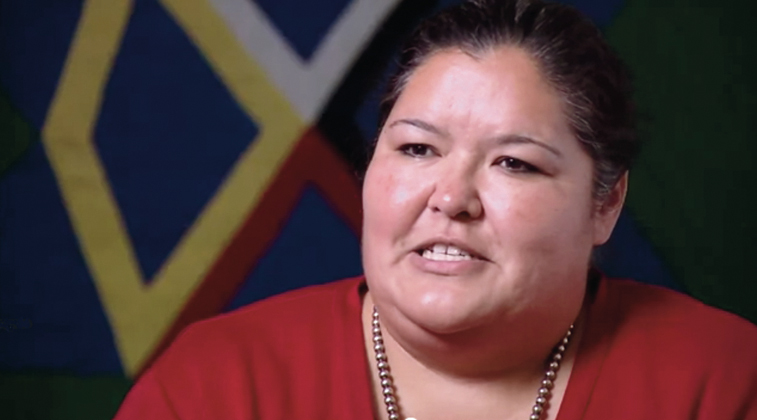 n an historic move, the Greater Minneapolis Council of Churches (GMCC) has selected Noya Woodrich (Athabaskan) as both the first woman and the first Native American to serve as Chief Executive Officer (CEO) and President of the organization. Woodrich currently serves as the Executive Director of the Division of Indian Work (DIW), a position she has held for the past eleven years. DIW is partially funded  by GMCC.

"This is breaking through another glass ceiling, making another step for proving that a woman and a person of color can do the same job that a white man can do," said Woodrich.

Woodrich began working with the DIW as an intern while she was pursuing her Bachelor’s degree in Social Work at Augsburg College. After her internship was completed, she volunteered for some summer youth programs and did part-time work for the DIW before being hired full-time as a Program Director for the Teen Indian Parents Program. She was later hired as the Assistant Executive Director of the DIW, a position she held for six years before moving on to become the Executive Director. In all, Woodrich has been with the DIW for a little over twenty years.

"I did not grow up in the Indian community here," she said. "Being at the DIW offered me a way to be involved and connected to my community."

Woodrich was born in Alaska, but she and her brother were adopted by a white couple and grew up outside of Wasaw, Wisconsin, where the closest American Indian Reservation was 30-40 miles away.

"My brother and I were the only Indians growing up. Once we started high school in Wasaw, there were maybe 2 or 3 other Indian students," she said.

Woodrich credits her adoptive parents with inspiring aspects of her leadership and work style.

"My mom and dad were and are entrepreneurs, and I’m definitely an entrepreneurial thinker," she said.

Woodrich also credits the former Executive Director of DIW, Mary Ellen Dumas, with giving her the opportunity to become a successful manager.

"She took the chance and hired me," she said. "She allowed me to grow."

Woodrich also says that the current CEO and President of GMCC, Rev. Dr. Gary Reierson, has been a supportive influence.

"He built me up along the way and I always felt valued for the work I did," she said. "I never doubted that I could do the job, and I think you get that confidence because the people around you support you and the job you’re doing."

The relationship between GMCC and DIW has not always been one of such a supportive and equal partnership, however. In DIW’s early days, the interaction between the two organizations was often paternalistic in nature, with the GMCC controlling what went on at the DIW.

"It was very much a parent-child relationship," said Woodrich.

Although the DIW has remained legally under the auspices of the GMCC, both organizations have worked to change their relationship since the early 1990s. They started promoting the work they did as a collaboration between equals. DIW was given primary authority over all Native American-related issues within GMCC. The DIW established its own Board of Directors, at least two-thirds of whom must be American Indian. Additionally, the Executive Director of the DIW now also serves as the Senior Vice President of the GMCC.

GMCC was founded in 1905 with the goal of addressing poverty in Minnesota by providing a wide range of social services to struggling families and community members. Today, it is the largest council of churches in North America and serves communities in Wisconsin, Iowa, South and North Dakota, and Illinois, in addition to the Twin Cities metro area and Minnesota as a whole.

In addition to the DIW, GMCC sponsors Minnesota FoodShare, which provides supplies to food shelves throughout the state. GMCC also houses Metro Paint-A-Thon and HandyWorks, which help make repairs and improvements to the homes of low-income senior citizens. Kinship is yet another GMCC program that connects youth to adult mentors. GMCC’s Urban Immersion Service Retreats help to educate community members about poverty and mobilize them as volunteers.

DIW exists as a partnership with GMCC, offering services particularly designed to empower the urban Native American community in the Twin Cities area. Founded in 1952, DIW is the oldest organization in the cities that works directly with American Indians.

In her years working at the DIW, Woodrich feels she has accumulated a wealth of managerial and leadership experience.

"I’ve been able to manage the organization through some tough times and some good times," she said.

When Woodrich first joined the team at DIW, there was a lack of awareness in the Native community about the work the organization did and its advocacy by and for Native people.

"Claiming our spot in the Indian community has been one of the things I’m most proud of during my time at the DIW," she said.

Woodrich is also proud of her ability to build partnerships and collaborative efforts with organizations city and statewide.

"I can adjust how I do things to work well with all different types of people," she said.

Woodrich looks forward to extending her skills in communication and relationship-building to her new role with GMCC. She will be a key player in developing the organization’s new strategic plan and looks forward to learning more about the various programs GMCC sponsors.

"There’s an opportunity to grow and increase the presence of those programs and the GMCC as a whole in the community of Minneapolis," she said.

She is especially excited to work with the Center for Families, a GMCC organization located in North Minneapolis that was founded to serve the West African community.

"To me, it feels very similar to the DIW in that it’s a piece of the council of churches that is designed and singled out to serve a particular population, and I want to make sure we’re doing that," Woodrich said.

She is also excited to work more closely with the Community Justice Project, a program that connects ex-offenders with mentors to help them transition to a successful life outside the correctional system and reduce the recidivism rate. Although many former inmates in the program are people of color, most of the program’s mentors are white women.

"We have a need to get more mentors who mirror who we’re serving," said Woodrich.

In sum, Woodrich believes that her new role will allow her to increase her effectiveness and expand her skills to serve the Minneapolis community.

"This will allow me to go to the next level," she said. "I’ll be involved with and be able to learn about different communities in the city and state, build my skills and abilities, and think more broadly."