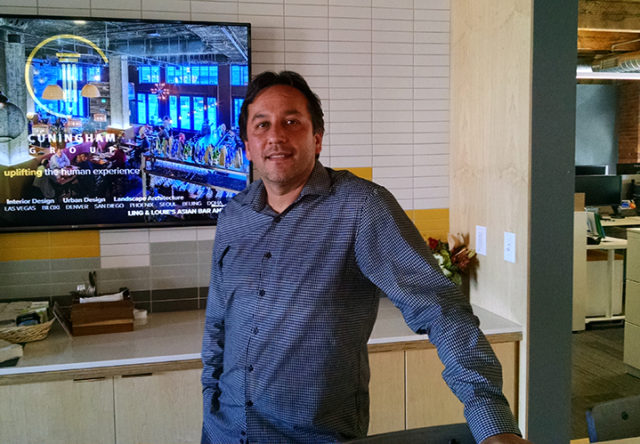 A Minneapolis-based architect and urban designer has been helping tribes and Native American groups plan and build useful buildings and landscapes all over the country, and his talents have been put to work throughout Minnesota.

“I don’t like cliché architecture. I want buildings and designs to be true to indigenous cultures. I also want everything to be in balance so buildings are functional and efficient,” said Sam Olbekson. Olbekson (White Earth Ojibwe) is a part owner and principal of Cuningham Group Architecture Inc., a large multinational firm of architects and designers that has about half its 375 employees at home base in Minneapolis’ St. Anthony Main. He is also the founder, primary owner and chief executive of Full Circle Indigenous Planning, a separate research, planning and design company geared toward serving tribes, economic development agencies and gaming enterprises throughout Indian County.

Full Circle Planning is housed within the Cuningham Group headquarters. The two firms provide professional talents for each other and frequently work on joint projects. It grates Olbekson when he sees large-scale teepees, for instance, built at gaming and hospitality sites operated by tribes that never used teepees for housing. He is also bothered by sincere cultural efforts that build schools in the shape of eagles or other animals that leave hallways, classrooms and other school areas in a mishmash.

That can be destructive to the educational purpose of the institution, he said. “It may be a work of art. But it isn’t efficient. It can really be difficult to remodel and make useful.” Olbekson is currently working on plans for remodeling and expanding the Minneapolis American Indian Center. Minneapolis lawmakers are seeking state funds through the state bonding bill in the current session of the Legislature to help build the $12 million to $14 million project.

Robert Lilligren is convinced the expanded MAIC center will fit “like a glove” on Minneapolis’ American Indian Cultural Corridor on Franklin Avenue. “Sam did the Cultural Corridor Master Plan, too,with the city of Minneapolis,” said Lilligren (White Earth Ojibwe), president and chief executive of the Native American Community Development Institute (NACDI) that overseas much of the development and planning along the Corridor.

“What I see is a talented person who really gives back to his community,” said Lilligren. “He’s around wherever he’s needed,” Lilligren said, noting that Olbekson serves as president of the board of directors for MAIC and as chair of the board of directors for NACDI. Other recent or current Minnesota Native projects aided by Olbekson, Full Circle Planning and/or Cuningham Group are: All My Relations Art Gallery, Minneapolis; Anpetu Was’te Cultural Arts Marketplace, Minneapolis; and Red Lake Nation Community Center, Red Lake.

That took planning with Red Lake officials and Native elders in the Twin Cities. While not specifically for elders or people from Red Lake, the tribe wants to help provide affordable housing for the large number of former Red Lake residents living in the metro area. Minneapolis American Indian Center executive director Mary LeGarde told The Circle in a March article that Olbekson and the center used the same collaborative approach in design planning. It involved meetings with elders, other community residents and users of the center to gauge needs and wants that would make the center more useful, efficient, economic and culturally supportive.

That is the way Cuningham and especially Full Circle Indigenous Planning work with pre-design planning, Olbekson said in an interview at his downtown Minneapolis corporate headquarters. He’s well aware of cultural differences that should be factored when designing buildings and other projects like campuses and grounds that will serve efficient and useful purposes over time. He brings both knowledge from his rural Ojibwe cultural traditions with the spatial needs of urban design. Olbekson grew up bouncing back and forth between Minneapolis and White Earth.

“I was in the eighth grade before I attended the same school for a full year,” he said. It didn’t hurt him in school. “I was always good at math and art,so I’ve put these together,” he said. After graduating from public schools in Minneapolis, Olbekson went on to get a bachelor’s in architecture from Cornell University in 1994,worked as a project manager and designer until 2003, then went back to school. He received his master of architecture in urban design (MAUD) degree from Harvard University Graduate School of Design in 2005. He joined Cuningham Group in December 2011. Art in various for msis deeply embedded in indigenous cultures, he said. At the same time, the number of Native people professionally trained as architects and in related professions is still small. It is small in Minnesota, too, he said, but it does have a strong foothold here. Mike Laverdure (Turtle Mountain Ojibwe), a co-owner of DSGW Architects in Duluth and founder and owner of First American Design Studio in Lake Elmo, combines research and design fields for tribes along the same paths as Olbekson’s two entities. They both work to encourage young people to follow in their paths. Laverdure is currently president of the national American Indian Council of Architects and Engineers (NICAE) professional organization. Olbekson is vice president and in line to succeed him. Culturally aware research is needed for doing due diligence for building projects from pre-design planning to long-range master planning, Olbekson said. This applies to small and large-scale projects, whether they be cultural arts and landscape projects, community centers,schools, housing, libraries or gaming and entertainment facilities. This approach not only works in Indian Country. It applies to projects elsewhere as well. Cuningham has operations in Los Angeles, Los Vegas, Biloxi (Miss.), Denver, San Diego, and Phoenix. Several of these offices work projects with tribal entities.The firm also has offices in Seoul, South Korea; Beijing, China, and Doha, Qatar for the Gulf region of the Middle East. All clients in those countries would have cultural sensitivities not easily met by casual design and architectural work tossed in from afar.