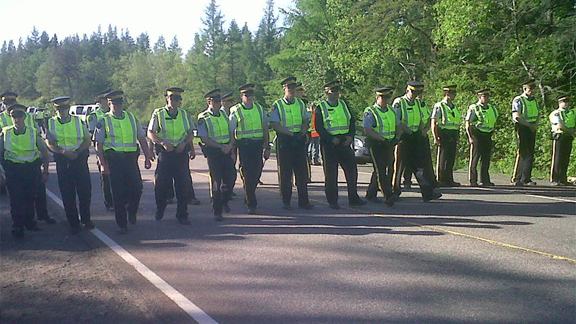 Someone needs to explain to me why wanting clean drinking water makes you an activist, and why proposing to destroy water with chemical warfare doesn’t make a corporation a terrorist.

I was in South Dakota in late June, which is sort of a ground zero for the XL Keystone Pipeline – the pipeline owned by a Canadian Corporation which will export tar sands oil to the rest of the world. This is the heart of the North American continent. Bwaan Akiing is what we call this land – Land of the Lakota. There are no pipelines across it, and beneath it is the Oglalla Aquifer wherein lies the vast majority of the water for this region. The Lakota understand that water is life, and that there is no new water.

Tar sands carrying pipelines (otherwise called “dilbit”) are sixteen times more likely to break than a conventional pipeline, and it seems that some ranchers and Native people – in a new Cowboy and Indian Alliance – are intent upon protecting that water.

This community understands the price of protecting land, and remembers the use of military force upon a civilian community and the over 133,000 rounds of ammunition fired by the National Guard upon Lakota people forty years ago at Wounded Knee.

That experience is coming home again, this time in Mi’gmaq territory in Canada. In mid-June in New Brunswick, the Canadian military came out to protect oil companies. In this case, seismic testing for potential natural gas reserves by Southwestern Energy Company (SWN), a Texas based company working in the province. It’s an image of extreme energy, and perhaps the times.

SWN exercised it’s permit to conduct preliminary testing to assess resource potential for shale gas exploitation. Canadian constitutional law requires the consultation with First Nations, and this has not occurred.

That’s when Elsipogtog Mi’gmaq warrior chief, John Levi, seized a vehicle containing seismic testing equipment owned by SWN. His tribe says that fracking is illegal without their permission on their traditional territory. About 65 protesters, including women and children, seized the truck at a gas station and surrounded the vehicle so that it couldn’t be removed from the parking lot. Levi says that SWN broke the law when they first started fracking “in our traditional hunting grounds, medicine grounds, contaminating our waters.” according to reporter Jane Mundy in the online Lawyers and Settlements publication. This may be just the beginning.

On June 9, the Royal Canadian Mounted Police (RCMP) came out en masse, seemingly to protect SWN seismic exploration crews against peaceful protesters – both native and non-Native – who were blocking route 126 from seismic thumper trucks. Armed with guns, paddy wagons and twist tie restraints, peaceful protestors were arrested. Four days later the protesting continued, and this time drew the attention of local military personnel. As one Mi’gmag said, “Just who is calling the shots in New Brunswick when the value of the land and water take a backseat to the risks associated with shale gas development?”

The militarization of the energy fields is not new. It’s just more apparent when it’s in a first world country, albeit New Brunswick. New Brunswick is sort of the El Salvador of Canadian provinces, if one looks at the economy, run akin to an oligarchy. New Brunswick’s Irving family empire stretches from oil and gas to media, they are the largest employer in New Brunswick and the primary proponents of the Trans Canada West to East pipeline, which will bring tar sands oil to the St. Johns refinery owned by the same family.

Irving is the fourth wealthiest family in Canada, the largest employer, land holder and amasses that wealth in the relatively poor province. The Saint John refinery would be a beneficiary of any natural gas fracked in the province. In general, press coverage of Aboriginal issues is sparse there at best.

Fracking proposals have come to their territory with a vengeance and the perfect political storm has emerged – immense material poverty (seven of the ten poorest postal codes in Canada), a set of starve or sell federal agreements pushed by the Harper administration (on first nations), and extreme energy drives.

Each fracking well will take up to two-million-gallons of pristine water and transform the water into a toxic soup, full of carcinogens. The subsistence economy has been central to the Wabanaki confederacy since time immemorial, and concerns over SWN’s water contamination have come to the province.

A recent Arkansas lawsuit against SWN charges the company with widespread toxic contamination of drinking water from their hydro-fracking.

Canada is the home to 75% of the worlds mining corporations, and they have tended to have relative impunity in the Canadian courts. Canadian corporations and their international subsidiaries are being protected by military forces elsewhere.

According to a U.K. Guardian story, a Quebec Court of Appeal rejected a suit by citizens of the Democratic Republic of the Congo against Montreal-based Anvil Mining Limited for allegedly providing logistical support to the DRC army as it carried out a massacre, killing as many as 100 people in the town of Kilwa near the company’s silver and copper mine. The Supreme Court of Canada later confirmed that Canadian courts had no jurisdiction over the company’s actions in the DRC when it rejected the plaintiffs’ request to appeal. Kairos Canada, a faith-based organization, concluded that the Supreme Court’s ruling would “have broader implications for other victims of human rights abuses committed by Canadian companies and their chances of bringing similar cases to our courts.”

In the meantime, back in New Brunswick, a heavily militarized RCMP came out to protect the exploration crews. Opposition to the Keystone XL pipeline has many faces, from ranchers in Nebraska and Texas who reject eminent domain taking of their land for a pipeline right of way, to the Lakota nation which walked out of State Department meetings in May in a show of firm opposition to the pipeline. All of them are facing a pipeline owned by TransCanada, a Canadian Corporation.

On a worldwide scale communities are concerned about their water. In El Salvador, more than 60% of the population relies on a single source of water. In 2009, this came down to choosing between drinking water and mining. In 2009, after immense public pressure, the country chose water. It established a moratorium on metal mining permits. Polls show that a strong majority of Salvadorans would now like a permanent ban. A testament to how things can change even in a politically challenged environment.

Up in Canada’s version of El Salvador, twelve people were arrested, and some were detained and interrogated by investigators by the RCMP forces. And after a day of the federal military making their presence felt, the people of the region have concerns about how far Canada will go to protect fossil fuels.

In Bwaan Akiing, I am hoping that people who want to protect the water are treated with respect. I also have to hope that those 7,000 plus American owned drones aren’t coming home, omaa akiing, from elsewhere to our territories in the name of Canadian oil interests.

Winona LaDuke is the Executive Director of Honor the Earth in White Earth Reservation, MN. Visit their website at www.honorearth.org.