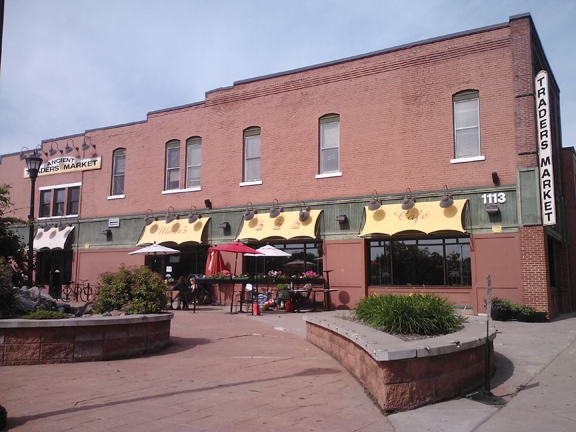 The American Indian Community Development Corporation (AICDC) acquired Ancient Traders Market from its most recent owner, the Twin Cities branch of the Local Initiatives Support Corporation (LISC) on May 31. The $2.2 million purchase was part of a multi-year plan and partnership between the two organizations to reestablish Native ownership of the building and support further community and economic developments in Minneapolis’s Phillips Neighborhood.

“It really is an important acquisition for us as it relates to the American Indian Cultural Corridor and the economic strength and vitality of the community,” said AICDC Chief Executive Officer Michael Goze.

AICDC’s role in such initiatives was outlined in the American Indian Community Blueprint, which was created by the Native American Community Development Institute in 2010. The Blueprint’s introduction states that the document “establishes a community-development framework for asset-based, solution-oriented strategies designed to advance American Indian interests and opportunities” in the Twin Cities.

“AICDC’s role starts with the acquisition of key properties,” said Goze. “Once we have the properties, we can look at the future of development.”

With these goals in mind, AICDC has become a key stakeholder of property along the American Indian Cultural Corridor. The organization currently owns all the land on the north side of Franklin Avenue from Hiawatha Avenue to the Franklin Community Library, with the exception of the Minneapolis American Indian Center. Ancient Traders Market, located on 1113 East Franklin Avenue, marks the first purchase AICDC has made on the south side of the street. One of the organization’s goals is to eventually own the Franklin Circles Shopping Center and Aldi supermarket just east of Ancient Traders Market.

“We’d like to get land back that was once held by Indian organizations and secure it,” said Goze.

Ancient Traders Market was originally owned and developed by the American Indian Business Development Corporation (AIBDC). Goze said the organization was started in the 1970s by a group of Native women who “saw a need for entrepreneurship and keeping dollars in the community.”

At that time, much of the south side of Franklin Avenue in the area, from Ancient Traders Market to 14th Avenue South, was bought through the AIBDC with federal funding designated for Native American economic development.

Great Neighborhoods was looking to expand its work into North Minneapolis and began a large development project. LISC, who opened their Twin Cities branch in 1988, became involved with this new project.

“We knew Ancient Traders Market had significant community interest in many ways. It was a place of a rebirth and growth, a home base for the Native American community that has historically been in the Phillips community,” said Abariotes. “It was our opportunity to step in and purchase all the rights to the building in order that we could sell it back to the community through AICDC.”

Over the course of the next several years, LISC worked to acquire the rights to all the properties housed within the Ancient Traders Market. In December of 2011, they began meeting with AICDC to co-manage much of the building and plan the eventual turnover. Abariotes said AICDC was a natural partner for LISC because the two organizations have collaborated on development projects together for the past 13 years, including Anishinabe Wakiagun supportive housing, Many Rivers – Niibiwa Siibin apartments and commercial space, and Bii Di Gain Dash Anwebi elder’s housing.

Abariotes also cited AICDC’s role in the American Indian Community Blueprint as a motivating factor for transitioning Ancient Traders Market into its possession.

“This was kind of a special case because AICDC had been part of the Blueprint and thinking through how to leverage the assets of the Native American community in the neighborhood,” said Abariotes. “They’ve also been a longtime partner of ours and between the two efforts, it was a nice fit.”

In the immediate future, Goze says AICDC plans to continue to manage Ancient Traders Market and build its occupancy. Part of the drive to maintain a strong Native presence in the neighborhood through business ventures like Ancient Traders Market, social services, and housing, is so communities can get access to the resources they need.

“Diversity has always been a key for Minneapolis, like a moniker for them, and the American Indian community has been an important part of the history of Minneapolis, especially here on the Southside,” he said. “We still have a huge presence of organizations that serve the Native population, so we need to continue to hold our population to where they can use the services.”

Abariotes said that LISC has invested in AICDC and other Native organizations in the Twin Cities because they are community-driven.

“We’re not a lender that goes directly to individuals, we go to community-based organizations who care about creating quality of life and bringing their work to the community,” she said. “It’s an important component, particularly for the Native community, to have organizations that are focused on insuring that Native people are able to be served or be connected to the economic benefits that neighborhood revitalization brings.”