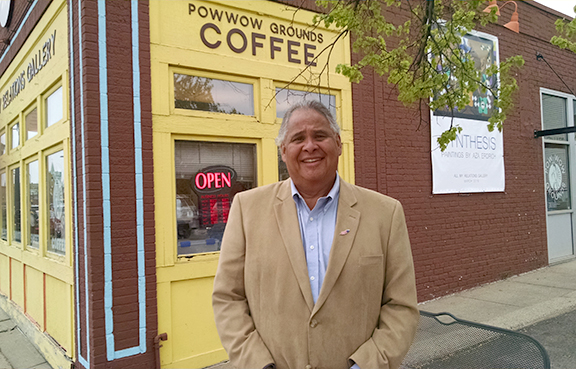 Change is coming to Franklin Avenue in the Phillips neighborhood of south Minneapolis, but it need not drive out the Native American population that has put down roots there as their urban home for more than 50 years.

“We’re either going to be victims of progress or navigators of progress,” said Michael Goze, chief executive officer of the American Indian Community Development Corp (AICDC). Building affordable housing is an important tool for navigating the change, he said.

In October this year, one small but important step to preserving Native residency and cultural ties in the neighborhood will occur when Goze’s AICDC and Project for Pride in Living (PPL), another mission-driven nonprofit organization, open 32 new units in their Anishinabe Bii Gii Wiin housing project at 1600 19th St. South.

The new, three-story addition will increase apartments available in the campus to 77, all serving people who are disabled or low-income earners who are receiving public housing and living support. The existing 45 units in the complex are being remodeled as part of the $10.5 million project.

That barely scratches the surface on affordable housing needs in the general area, according to various research studies, although it is crucial for a segment of the neighborhood population with low incomes and disabilities.

The Phillips neighborhood is served by the Blue Line light rail system that runs from downtown Minneapolis to the Mall of America in Bloomington and Minneapolis-St. Paul International Airport. With it comes commuting access to jobs and potential customers to local businesses. And that also brings the threat that transit availability will bring added upward pressures on rents and home prices.

This process of changing neighborhoods is called “gentrification” by sociologists and urban studies professionals. Some of this is inevitable and is already visible along Franklin Avenue. It raises the challenge for the Native community to either be victims or drivers of the change, Goze said.

“All communities (neighborhoods) need good mass transit to have opportunities,” he said. But with greater opportunities, he added, “we are seeing more competition for land and space for housing and business development.”

Joanne Kosciolek, vice president of development and external affairs at PPL, said her group and AICDC seek out property along transit lines for building and operating affordable housing. They may have lucked out, she said, when they partnered to build the first phase of Anishinabe Bii Gii Wiin in 1994.

“We didn’t know the Blue Line would be that close,” she said. “There is competition for properties, but we already had the first phase completed before we knew where the transit line would go.”

The Minnesota Housing Partnership (MHP) research group found that 10 percent of Hennepin County homeowners and 25 percent of the county’s renters paid half or more of their incomes on housing in 2015. Federal and state researchers use 30 percent of household incomes as the benchmark that puts people at risk of being able to afford basic needs such as food and medicine.

MHP’s profile of the Legislative District that includes the Phillips neighborhood shows that 56 percent of area residents pay more than 30 percent of their incomes on housing. Separately, MHP noted that the minimum wage earner would need to work 68 hours per week to afford a one-bedroom apartment to stay under the 30 percent benchmark.

In late April, the Metropolitan Council announced that a realtor’s study found that home prices along the Blue Line in Minneapolis in early 2015 averaged $220,000 while the median-valued home in a non-light rail transit neighborhood averaged $194,000.

“We regularly hear from our members who work with millennials and boomers alike that today’s buyers want the option to take transit to the airport, to entertainment, to work, to sporting events or even for an evening out with friends or family,” said David Arbit, director of research and economics for the Minneapolis Area Association of Realtors, in announcing the findings.

The Met Council stressed that the increase in home values along transit lines also showed the need to balance affordable housing options for people needing access to transit. There is progress meeting the Council’s goals.

Bonnie Kollodge, a media specialist, said Council researchers have found 5,439 publicly subsidized affordable rental units existing or under construction within a half mile of a Blue Line station.

Of those, 948, or 17 percent, have been permitted within the last five years. There are 650 additional affordable units proposed or under development. That shows there is interest in building affordable housing along the Blue Line, she said.

Housing isn’t all that is being squeezed along Franklin Avenue and its American Indian Cultural Corridor. “You can’t find land anywhere along here to develop and create new businesses,” said AICDC’s Goze. “We replace, or recycle, retail space. We don’t create more.”

For instance, AICDC and partners purchased the Ancient Traders Market building at 1113 E. Franklin Ave. three years ago. It had 72 percent occupancy of its office suites and retail spaces at that time. It’s been at 100 percent occupancy the past year with waiting lists.

AICDC or partners own most of the property on the north side of Franklin in the American Indian Cultural Corridor for about five blocks west of Hiawatha Avenue and the Blue Line. It is a mix of housing and retail space that include retail space and the Pow Wow Grounds coffee shop, galleries and services.

There are enough cultural attractions to make this area of the Phillips neighborhood a destination point, Goze said. The Norway House is just another five blocks farther west on Franklin, and the American Swedish Institute on Park Avenue expands cultural attractions beyond the Corridor.

Recent studies from New York and Los Angeles site mass transit as an influence on neighborhoods, just as assuredly as it is in south Minneapolis and the Twin Cities metro area. The New York study, however, found that mass transit doesn’t cause gentrification in and of itself; rather, other factors come into play. The Los Angeles study (Transit for All) insisted all Angelinos need access to transit and jobs.

One of the best recent such studies looked at gentrification in the Twin Cities. The University of Minnesota Law School’s Institute on Metropolitan Opportunity project found little evidence that low-income people were being forced out of their traditional neighborhoods.

Regardless, recovery from the Great Recession and the combined cultural ties cited above are attracting traffic to the Phillips neighborhood, Goze said. The challenge ahead, he added, will be finding ways to accommodate people – housing – and economic activity – businesses. “It’s really about people and jobs.”